Tropical Storm Barry has made landfall in the US state of Louisiana, as people in the southern state prepare for heavy winds and rain, flooding and loss of electricity. 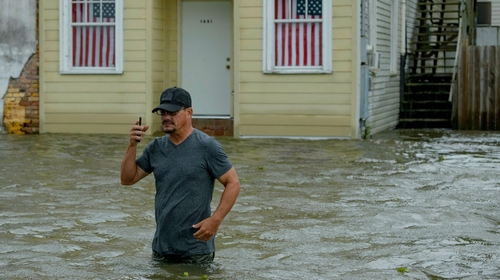 Storm Barry was briefly upgraded to a hurricane earlier on Saturday but as it approached land, its power weakened.

On Sunday, Barry is expected to continue weakening and become a tropical depression.

Video showed water overtopping a levee in Plaquemines Parish south of New Orleans, where fingers of land extend deep into the Gulf of Mexico.

Residents and business owners in New Orleans were laying down sandbags and boarding up windows while city officials set up shelters for residents.

With Barry threatening massive rainfall across several southern states, federal emergency declarations were issued to help free up resources to address the storm.

“We could be looking at widespread major flooding across several river basins,” said the NHC.

Some of the scenes of heavy rains, a potential storm surge, and flooding are reminiscent of 2005’s deadly Hurricane Katrina.

The costliest and deadliest hurricane in US history, Katrina submerged about 80 percent of New Orleans, causing some 1,800 deaths and more than $150bn in damage.

Parts of Dauphin Island, a barrier island in Alabama 322 kilometres from where Barry was headed, were flooded both by rain and surging water from the Gulf, said Mayor Jeff Collier, who was driving around in a Humvee to survey damage.

He said the island still had power early Saturday afternoon and wind damage was minimal.

Storm strengthens as it heads for Florida