Violence resulting from bias or prejudice in the United States reached a 16-year high last year, the FBI said on Tuesday, with the number of victims in anti-Latino or Hispanic hate crimes rising more than 21 percent.

The data coincides with an ongoing debate over President Donald Trump’s hardline immigration policies and follows the August 2019 mass shooting at a Walmart in El Paso, Texas, when the suspected gunman told police he was singling out Mexicans.

“We’re seeing the swapping of one derided group in the social-political arena for another,” said Brian Levin, director of the Center for the Study of Hate and Extremism at California State University, San Bernardino.

“Attacks against Muslims peaked around 2016 when terrorism was the concern. Now immigration is the number one issue and Latinos are being targeted.”

There were 671 victims in anti-Latino or Hispanic incidents in 2018, compared with 552 the year before, the FBI said in its annual Hate Crime Statistics report.

“President Trump frequently refers to Latinos in the most hateful and bigoted ways, and words matter,” she said. “Having just visited El Paso and hearing first-hand from the victims of the tragic shooting there, I know that hateful words have hateful consequences, and can result in violence and even death.”

The White House did not immediately respond to a request for comment.

The FBI said that hate crimes overall fell slightly in 2018 after three years of increases, with 7,120 reported incidents. The agency did not offer a reason for the decrease. But the 0.77 percent drop in incidents roughly matches the percentage decrease in the number of police departments that voluntarily sent data to the FBI in 2018.

Despite the slight fall, violence against individuals increased, the FBI said, pointing specifically to the increase of the number of “crimes against persons”, instead of property. 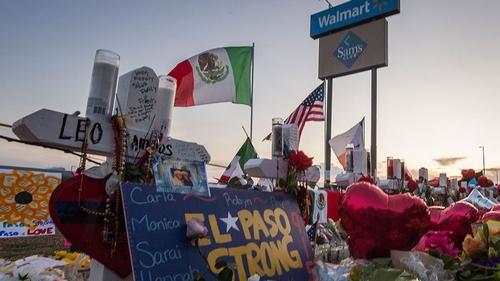 A makeshift memorial for victims of the shooting that left a total of 22 people dead decorates the Cielo Vista Mall Walmart in El Paso, Texas Mark Ralston/AFP

The latest FBI data showed an 11.7 percent rise last year in the number of hate crimes that involved the physical or verbal assault of a person, and the number of hate-crime homicides hit its highest level yet with 24 murder victims.

The FBI report showed white individuals made up 53.6 percent of the known criminals who carried out the attacks. That is an increase of nearly three percentage points.

Hate crimes singling out black people dropped to the lowest share since the FBI began publishing the data in 1992, with incidents involving anti-black bias comprising 27 percent of the total.

That is down from a peak in 1996 when anti-black crimes were 42 percent of reported incidents.

“We’re having a democratisation of hate,” Levin said. “There is a reshuffling in who is being targeted.”

That worries experts who fear attacks will rise this year in the run-up to a heated presidential election in 2020 and that attacks will increasingly target people and not property in the form of vandalism or other damage.

Ex-envoy to Ukraine defies Trump, testifies he pushed in oust her

Storm strengthens as it heads for Florida