Washington, DC – A new fight has erupted between Democrats in Congress and the Trump administration over access to officials as three House committees investigate US President Donald Trump’s dealings with Ukraine. 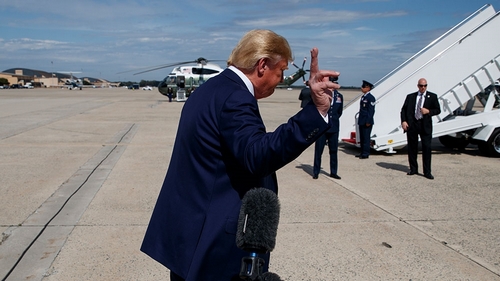 Trump walks off after speaking with reporters after arriving at Andrews Air Force Base File: Evan Vucci/AP Photo

Trump asked Ukraine President Volodymyr Zelensky in a July 25 telephone call to investigate former Vice President Joe Biden, a leading Democratic presidential hopeful, and his son Hunter Biden who had served on the board of Ukrainian natural gas company.

The call between the two leaders was the subject of a whistle-blower complaint alleging Trump used his office to “solicit interference” from Ukraine in the 2020 US presidential elections. The complaint, filed with the top US intelligence official last month, was released publicly on Thursday. Trump has denied any wrongdoing, saying the phone call was “normal”.

About a dozen White House and State Department officials listened to what was expected to be a routine call between Trump and Zelensky, according to the complaint. In the days after, senior White House officials sought to “lock down” records of the call, signalling White House officials “understood the gravity of what had happened”, the whistle-blower said.

The complaint and the Trump administration’s actions surrounding it prompted House Democrats to move forward with an impeachment inquiry. Trump has called the inquiry “witch-hunt garbage” and the whistle-blower complaint “fake”.

Democrats in Congress have requested immediate interviews with five current and former State Department officials who knew about Trump’s demands of Ukraine. Prior to the call, Trump had suspended $400m in US security assistance to Ukraine, prompting speculation that the president was holding out on the money pending the outcome of his conversation with the new president.

“The complaint gives us a pretty good roadmap of allegations that we need to investigate,” House Intelligence Committee Chairman Adam Schiff, a Democrat, told reporters last week as he outlined the committee’s investigative plans over the next two weeks.

“There is a whole host of people apparently that had knowledge of these events that the whistle-blower makes reference to,” Schiff said.

Republicans argue there was no quid pro quo in Trump’s call and charge Democrats with playing politics.

In addition to State Department officials, Democrats want to hear from associates of Rudy Giuliani, Trump’s personal lawyer, who was pressing Ukraine officials for cooperation with Trump’s demands prior to the July phone call.

Secretary of State Mike Pompeo, who was reportedly listening to Trump’s call with Zelensky, said in a combative letter on Tuesday, the diplomats would not be made available until claims of executive privilege among other sticking points are resolved.

“I am concerned with aspects of your request … that can be described only as an attempt to intimidate, bully and treat improperly the distinguished professionals of the” State Department, Pompeo’s letter said. “I will not tolerate such tactics,” he said.

But Democrats rejected Pompeo’s objections. “We are committed to protecting witnesses from harassment and intimidation, and we expect their full compliance and that of the Department of State,” three House committee chairmen said in a reply to Pompeo.

Both Pompeo and Giuliani have been served with subpoenas from House Democrats seeking documents related to their involvement with Ukraine.

Here are the five current and former State Department officials who congressional investigators want to talk to over the next two weeks:

Marie Yovanovitch is the former US ambassador to Ukraine who was abruptly recalled in May, two months early. An appointee of former President Barack Obama, Yovanovitch had given a pro-democracy speech in March prior to Ukraine’s elections, in which she called for the replacement of Ukraine’s special anti-corruption prosecutor who is an ally of people who were talking to Giuliani, according to reports.

Trump disparaged Yovanovitch in his call with Zelensky.

“The former ambassador from the United States, the woman, was bad news and the people she was dealing with in the Ukraine were bad news,” Trump said, according to the White House log of the call.

According to the whistle-blower, Giuliani told a Ukrainian journalist that Yovanovitch was “removed… because she was part of the effort against the president”.

The State Department has so far refused to answer questions as to why Yovanovitch was recalled.

Iran set for dialogue with Gulf neighbours as tensions soar

Kurt Volker, Trump’s special envoy to Ukraine, resigned on Friday just hours after being called by Democrats to be interviewed.

Investigators are interested in Volker’s role introducing Giuliani to Ukrainian government officials, including Andriy Yermak, an adviser to Zelensky.

Giuliani has reportedly said that he Volker was his “main” State Department contact regarding Ukraine.

US Ambassador to the European Union Gordon Sondland and Volker met with Zelensky after his call with Trump to provide “advice” on “how to navigate the demands the president had made,” according to the whistle-blower complaint.

Giuliani reportedly said that he had briefed Sondland on his dealings with Ukraine.

George Kent, as head of European and Eurasian Affairs within the State Department, oversees US policy for Ukraine.

Kent travelled to Ukraine on in early August, days after the president’s phone call with Zelensky.

He met with Ukraine Foreign Minister Pavlo Klimkin, a holdover from the administration of Petro Poroshenko who lost the election to Zelensky.

Kent was not mentioned in the whistle-blower complaint

He was identified in the whistle-blower complaint as one of the officials listening to Trump’s call with Zelensky.

A State Department official has denied he was on the call, according to reports.

MAGA Dale is not a good guy