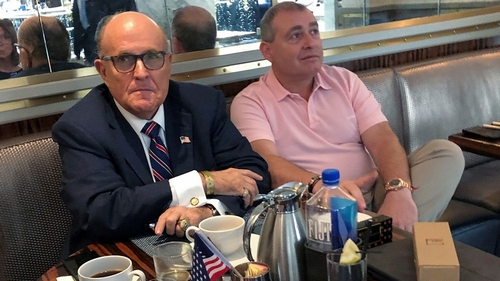 The men, Lev Parnas and Igor Fruman, were arrested on Wednesday night at Dulles International Airport, Geoffrey Berman, US Attorney for the Southern District of New York said. They had one-way tickets on an international flight. Parnas is from Ukraine and Fruman is from Belarus. But both are US citizens.

Parnas and Fruman have been charged with making illegal donations to US politicians, including a $325,000 “straw man” contribution from a fake company to American First Action, a group supporting Trump’s reelection campaign, according to the newly unsealed indictment.

Berman alleged Parnas and Fruman “broke the law to gain political influence while avoiding disclosure of who was actually making the donations and where the money was coming from”.

The contribution was the subject of a complaint by a watchdog group in 2018 to the Federal Election Commission, which regulates and enforces rules on political giving in the US. It is illegal under US law to disguise the source of monetary contributions to US politicians.

Parnas and Fruman were already embroiled in a rapidly expanding impeachment inquiry by congressional Democrats into Trump and Giuliani’s actions in Ukraine.

House Democrats allege Giuliani conducted a shadow campaign at Trump’s direction earlier this year to pressure the then-incoming president of Ukraine Volodymyr Zelensky to open investigations into former Vice President Joe Biden and his son, Hunter, who had served on the board of a Ukrainian gas company. There has been no evidence of wrongdoing by the Bidens.

Fruman and Parnas were served with subpoenas by the House Intelligence Committee in the impeachment proceedings on Thursday.

House committees are investigating whether Trump “jeopardised national security by pressing Ukraine to interfere” in the upcoming 2020 US presidential election, three House committee chairmen said in a statement announcing the subpoenas.

Parnas helped Giuliani arrange a trip to Ukraine earlier this year where Giuliani sought meetings with Zelensky and his associates. Zelensky told reporters earlier this month he had never met Giuliani.

Parnas enlisted the help of a congressman to get Yovanovitch removed, prosecutors said. That congressman is not named in the indictment, but according to US media, it is Pete Sessions, a senior Republican who was not re-elected in 2018.

Giuliani had complained Yovanovitch was blocking attempts to get Ukraine to initiate an investigation of the Bidens.

John Dowd, a defence lawyer representing Parnas and Fruman, could not be reached for comment.

The source of the illegal campaign donation cited by federal prosecutors in New York came to light when bank records of Parnas were revealed in a court case in Florida, according to a complaint by a non-governmental watchdog group to the Federal Election Commission.

An unnamed real estate lawyer, who specialises in helping foreign buyers, transferred $1.26m – allegedly financed by a mortgage on a condo owned by Fruman – to Aaron Investments I, a company owned by Parnas and his wife, according to the indictment and the FEC complaint.

Two days later, Aaron Investments I transferred $325,000 to America First Action, which then falsely attributed the contribution to Global Energy Producers, a shell company set up by Parnas and Fruman, the FEC complaint and the indictment said.

“This is what happens when you become visible… the buzzards descend,” the indictment quoted an unnamed individual who worked with Parnas as saying.

“That’s why we need to stay under the radar,” Parnas allegedly said, according to the indictment.

Parnas and Fruman attended a number of exclusive fundraising parties with Trump and obtained pictures of themselves with the president, according to the Campaign Legal Center.

“It’s fair to say Fruman and Parnas were making these donations to Trump to gain access to Trump and Giuliani,” said Brendan Fischer, a lawyer at the Campaign Legal Center, which filed the FEC complaint.

Motivated by their own personal financial and political interests, Fruman and Parnas “were trying to promote a narrative about Ukraine and they wanted the ambassador to Ukraine removed,” Fischer told Al Jazeera.

Trump said on Thursday that he does not know Parnas and Fruman, even if there is a picture of them together. Photos on Parnas’s Facebook, which have been deleted, showed him and Trump posing next to each other.

The federal indictment alleges two other men, David Correia, an American business associate of Parnas, and Andrey Kukushkin, a Ukraine-born US citizen, worked with Parnas and Fruman on a plan to funnel political contributions from the Russian to US politicians.

Kukushkin told Parnas the one million dollars from the Russian was “in order to cover all the donations whatsoever” to win state licences for the marijuana businesses, according to the indictment.

Kukushkin allegedly said the group needed to hide the businessman’s identity because of his “Russian roots and current political paranoia about it”.

US expands ‘Remain in Mexico’ to dangerous part of border