US Democratic presidential contenders on Wednesday vowed to pursue far-reaching limits on guns while standing up to the gun lobby, tackling an issue that has increasingly become a chief concern for their party’s voters.

A protester holds a sign during a ‘March For Our Lives’ demonstration demanding gun control in Sacramento, California Bob Strong/Reuters

Nine of the leading candidates gathered in Las Vegas, Nevada, for an all-day forum on gun safety, one day after the city marked two years since it suffered the deadliest mass shooting in modern US history, which killed 58 people.

The forum was sponsored by two gun control organisations, March For Our Lives and Giffords, and MSNBC.

But they also urged the hundreds of gathered activists to continue pressing the issue, arguing that their movement already has the power to prevail over the National Rifle Association (NRA).

Here’s a look at where some of the top contenders stand on gun control:

Former Vice President Joe Biden, who supports a renewal of the assault weapons ban imposed in the 1990s, has also called for a federal gun buyback programme to reduce the number of weapons on the street. His proposal, which was released just before Wednesday’s forum, however, does not go as far as other candidates who have proposed mandatory buyback programmes to remove assault-style weapons from the streets. 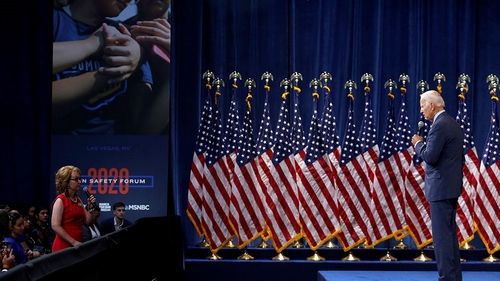 Biden helped pass the 1994 law prohibiting the manufacture for civilian use of assault weapons when he was a US senator, but the law expired a decade later.

“If we cannot rise to meet this moment, it won’t just be a political failure. It will be a moral one,” Biden wrote in an opinion article in the New York Times in August. “It will mean that we accept the next inevitable tragedy. That we are desensitized to children running from schools and bodies littering parking lots, that our outpouring of thoughts and prayers will grow increasingly hollow.”

On Wednesday, Cory Booker spoke passionately about witnessing first-hand the everyday scourge of gun violence in his low-income neighbourhood in Newark, New Jersey.

“We cannot wait for this hell to be visited upon your community for you to be activated for this fight,” he said during the forum. “It is a life-and-death issue for people in communities like mine.” 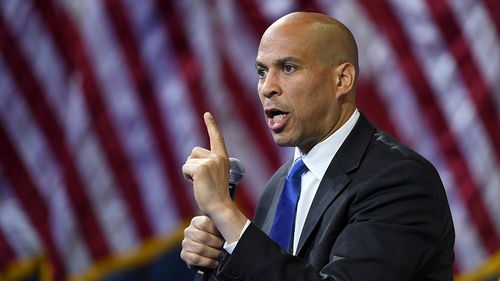 Booker introduced a 14-part plan earlier this year to tackle gun violence. It includes a ban on assault weapons, high-capacity magazines and “bump stocks”, which allow semiautomatic rifles to function like automatic weapons. It also would limit handgun purchases to one a month.

The plan also includes a gun licensing programme that would require those hoping to buy a gun to submit fingerprints, complete a gun safety course, sit for an interview and pass a background check.

“This is a national crisis,” Booker wrote on Twitter after back-to-back mass shootings in August, calling on Republican Senate Majority Leader Mitch McConnell to call the Senate back from recess and hold votes on gun proposals. “Enough. We need to end this carnage now.”

The plan also would invest one billion dollars to prevent and fight “violent extremism”. It would bolster the FBI’s domestic counterterrorism staff, revitalise the Department of Homeland Security’s efforts to counter violent extremism, and study whether there is a link between white supremacist groups and gun violence.

Buttigieg, however, does not support mandatory buybacks of assault-style weapons. 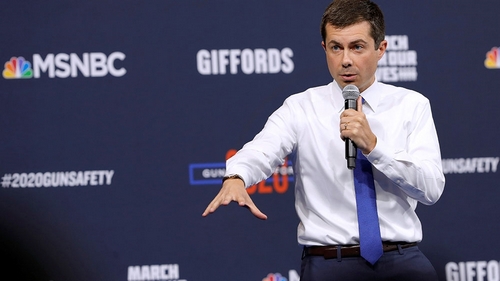 “We are the only country in the world with more guns than people. It has not made us safer. We can respect the Second Amendment and not allow it to be a death sentence for thousands of Americans,” Buttigieg said at a separate Democratic candidate forum in Las Vegas shortly after the shooting in El Paso, in which 22 people were killed when a suspected gunman, who said he was targeting Mexicans, opened fire in a Wal-Mart in the Texas city. Buttigieg was referring to the constitutional amendment on the right to bear arms.

US Democratic presidential candidate and mayor of South Bend, Indiana, Pete Buttigieg speaks during a forum held by gun safety organisations the Giffords group and March For Our Lives in Las Vegas Steve Marcus/Reuters

He added that “somewhere we’re going to draw a line. And all we’re saying… is that we need to draw the line a lot tighter.”

Senator Kamala Harris has endorsed an assault weapon ban that was proposed in the Senate, and backs universal background checks. She has also proposed using powers granted to the attorney general under the Gun Control Act of 1968 to ban the import of assault weapons. Harris estimates that as many as four million assault weapons currently in the US may have been imported.

Klobuchar said she shifted her views about gun control after meeting the family of victims of the 2012 Sandy Hook Elementary shooting in Connecticut in which 20 school children were killed. Minnesota, the state she represents, has a long tradition of hunting and she has tried to balance both interests.

Klobuchar has backed universal background checks and banning assault weapons and high-capacity magazines like the one used by the shooter in Dayton, Ohio. She authored Senate legislation to close the so-called “boyfriend loophole”, which allows people convicted of abusing someone they are dating to buy or own a gun. Current law only applies to spouses.

In response to Trump’s repeated assertions in August that mental health was to blame for mass shootings, Klobuchar tweeted: “‘Mental illness & hate pulls trigger, not the gun’ is President’s dodge to avoid truth: there’s mental illness & hate throughout world, but US stands alone w/high rate of gun violence. When someone can kill 9 people in a minute, that gun should never have been sold. Action!”

Beto O’Rourke, whose hometown in El Paso, has been one of the most vocal candidates on gun control.

O’Rourke has backed an assault weapon ban and universal background checks. He also would bar members and candidates for Congress from accepting political donations from political action committees, which he said would reduce the influence of the National Rifle Association lobbying group.

“We have a racism in America that is as old as America itself,” O’Rourke said in a speech he delivered when he resumed campaigning after the August mass shootings. “What President Trump says, and what he does, does not just offend our sensibilities or our understanding of the traditions of this great country. It changes who we are as a country.”

During the September Democratic debate, O’Rourke did not hesitate when asked whether he would confiscate assault-style weapons from Americans.

US Senator Bernie Sanders supports universal background checks, an end to the gun show loophole for firearms sales, a ban on the sale and distribution of assault weapons, a crackdown on straw purchases of guns for criminals, and the prohibition of high-capacity ammunition magazines.

After the August shootings, he called for an immediate Senate vote on a bill requiring a background check on every gun sale and transfer, which passed the Democrat-controlled House of Representatives in February. It has not been taken up by the Republican-controlled Senate.

Sanders was scheduled to appear at the forum on Wednesday but was forced to cancel after his hospitalisation for a procedure to clear a blocked artery.

US Senator Warren has backed several gun control measures, including the assault weapon ban, universal background checks and creating a federal licensing system that requires gun owners to register their firearms. She has called for repealing the Protection of Lawful Commerce in Arms Act, which would allow the victims of gun violence to sue weapon manufacturers for liability. 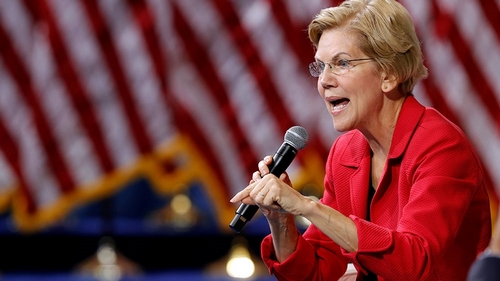 US Democratic presidential candidate Senator Elizabeth Warren responds to a question during a forum held by gun safety organisations the Giffords group and March For Our Lives in Las Vegas, Nevada Steve Marcus/Reuters

“The majority of Americans want to see us put sensible gun legislation in place, to get the guns out of the hands of people who pose threats like this, and yet it doesn’t happen,” Warren said on MSNBC earlier this year.

On Wednesday, Warren rejected Trump’s assertion on Wednesday that the ongoing Democratic impeachment inquiry is to blame for inaction on gun safety, calling it an “alternative reality”.

“You have to stop and ask yourself the question: What is so badly broken in this democracy that something that the overwhelming majority of Americans want to see done doesn’t get done,” she said. “And the answer is, there’s too much power in the hands of the gun industry and the gun lobby.”

In the wake of the El Paso shooting, former US Housing Secretary Julian Castro released a dual-focused plan to address both guns and white supremacists. Castro supports banning assault-style weapons.

He supports requiring a licence for all gun purchases and banning magazines that hold more than 10 rounds of ammunition. The Texan also supports allowing victims to sue gun-makers.

“My plan to disarm hate starts with comprehensively identifying the threat of white supremacist terrorism and combating it directly with a coordinated federal response,” Castro said in a post on Medium.com.

Entrepreneur Andrew Yang has backed comprehensive gun control measures that the rest of his party is behind, including an assault weapon ban and prohibiting high-capacity magazines.

He also supports creating a tax credit to incentivise upgrading guns to use smart technology, such as biological indicators, to unlock the firearm.

Yang said if more Americans embrace smart technology, a child who gets hold of a gun will have a “heavy, expensive prop” instead of a deadly firearm.

“You can upgrade the guns for free – that would help make kids safer in our homes,” Yang told CNN earlier this year.

On his campaign website, Yang said: “Responsible gun owners should continue to enjoy the right to bear arms, subject to licensing and education requirements that will enhance public safety. But we need to ban the most dangerous weapons that make mass shootings as deadly as they have become, and address the other violence – particularly suicide – that is plaguing this country.”

ME says it took two prisoners during al-Baghdadi raid