US President Donald Trump has intensified his attacks against four liberal Congresswomen and verbally attacked Representative Ilhan Omar of Minnesota as the crowd chanted: “Send her back!”

The US president termed the four women legislators as un-American at a rally in Greenville, North Carolina Gerry Broome/AP Photo

The US president termed the four legislators, including Representatives Rashida Tlaib of Michigan, Alexandria Ocasio-Cortez of New York and Ayanna Pressley of Massachusetts, as un-American at a raucous rally in Greenville, North Carolina.

Addressing his first rally since announcing his 2020 re-election bid, Trump said they were welcome to leave the United States if they do not like his policies on issues such as immigration and defending Israel.

“So these congresswomen, their comments are helping to fuel the rise of a dangerous, militant, hard left,” he said to roars from the crowd in North Carolina, a state seen as key to his re-election.

Trump spent about 20 percent of his freewheeling 90-minute-long speech criticising the four lawmakers, eliciting choruses of “Boo!” from the crowd, which he praised for its enthusiasm.

Trump’s diatribe against the congresswomen comes a day after the Democratic-controlled House of Representatives voted to condemn his earlier remarks as racist.

The US president ignited a firestorm with a volley of tweets and comments, deemed racist by many critics, in which he accused four congresswomen of colour, known as “the squad”, of hating America and urged them to “go back” to their countries of origin even though all are US citizens and three are US-born. 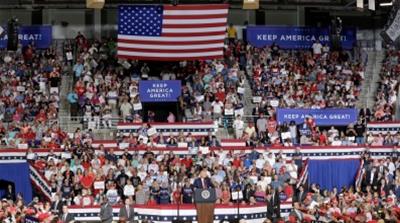 Trump’s speech elicited choruses of “Boo!” from the crowd, which he praised for its enthusiasm Gerry Broome/AP Photo

As Trump recounted past comments made by Omar – who was born in Somalia and emigrated to the US as a child – the crowd began chanting: “Send her back!”

“Tonight I have a suggestion for the hate-filled extremists who are constantly trying to tear our country down. They never have anything good to say. That’s why I say: ‘Hey, if they don’t like it, let them leave. Let them leave,'” Trump said.

Of Tlaib, he complained that she is “not somebody who loves our country” because she had referred to impeaching him using an expletive. 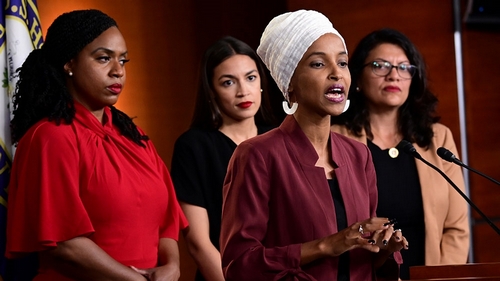 “Democrats are now the party of high taxes, high crime, open borders, late-term abortion, intolerance and division. The Republican Party is the party for all Americans and American values,” the US president said.

“Speaking to his supporters, Trump addressed the controversy, the pushback against his tweets targeting four Congresswomen of colour, saying that the argument that he is racist is simply unfounded,” Al Jazeera’s Kimberly Halkett, reporting from Greenville, said.

“Trump is appealing to American pride as he not only tries to hold onto his base here in New Carolina but also use some of the racial divisions in the US to win over new voters,” she said.

Eager to marshal his base, Trump promised earlier that his speech in North Carolina would address both “people who love, and hate, our Country.”

Meanwhile, the US House on Wednesday rejected a bid to launch impeachment proceedings against Trump.

Trump, who during his 2016 campaign voiced harsh assessments of the state of the country, tweeted a video in advance of the rally that featured patriotic scenes of the president meeting Americans, with frequent images of the US flag. It ended with the slogan: “America – One Squad Under God.”

The tactic follows a well-worn path for Trump, who called for a ban on Muslims entering the US during his 2016 campaign. His proposal drew widespread criticism at the time, but Republicans overwhelmingly supported it, and it was a factor in his victory that year.

Who can see it and how to watch