Every October 31 in the United States, an army of glucose ghouls begins to assemble around dusk. This harlequin parade of costumed children goes door-to-door seeking candy on what is arguably the coolest American holiday. Not all children, however, are welcome to participate. 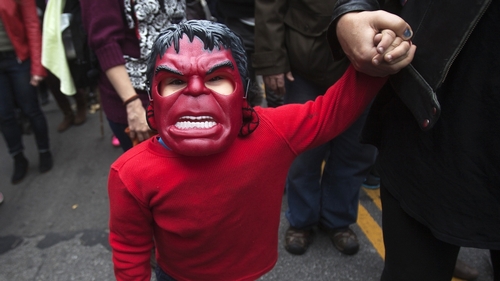 A child in a costume takes part in the 24th Annual Greenwich Village Children Halloween Parade in the Manhattan borough of New York on October 31, 2014 File: Carlo Allegri/Reuters

This Halloween, the US will lock some children in cages, ban some from entering the country altogether and identify others as dangerous thugs.

To understand why some children get to trick-or-treat while others get detained, banned or shot, we should look into the origins of the monster mythologies that inspire the “classic” Halloween monster costumes.

Monster mythologies personify our fears, and nothing is more fearsome to resurgent white nationalism in the US than people of colour. The policies that cage Latinx children, ban Muslim children and shoot black children are the end product of a lengthy history of portraying black and brown people as monsters.

The demonisation of Muslims

Many of today’s monster myths in the West originated from medieval Christendom’s dehumanisation non-Christians in general and Muslims in particular. As scholar of religions Sophia Rose Arjana points out in her book, Muslims in the Western Imagination, Europeans exaggerated Muslims into literal monsters.

They equated Islam with Satanism and characterised Muslim men as rapacious demons. Positing Muslims as threats to decency provided a justification for their ethnic cleansing and killing (the very same myths of hypersexuality would centuries later lead to the lynching of thousands of innocent black men under Jim Crow in the US).

Arjana argues that the growing strength of the Ottoman Empire, and its expansion into Europe spread fears of a Muslim demographic “threat” and paved the way for the creation of anti-miscegenation myths about monsters that can corrupt the blood of a Christian “with a bite”. Anxiety about race mixing with Muslims is what sparked the invention of the popular werewolf and vampire legends.

By transforming Muslims into monsters that are not only dangerous but also less than human, Europeans tried to justify their attempts to control Muslim peoples and rule over their lands. And these monster myths with their clear racial connotations continue to be propagated by popular culture today.

Hollywood has embraced these myths and created countless films employing racialised images of monsters. Classic monster flicks like King Kong (1931), The Wolfman (1941) and The Creature in the Black Lagoon (1954) reflect white America’s anxieties about race. All three films revolve around monsters that are visibly different, hold predatory relationships to white women and are unable to peacefully coexist with Western civilisation – all attributes popularly associated with the racial “other”.

Apart from the racialised monster imagery, the depiction of people of colour in movies is also overwhelmingly negative. Black and Latino men are often depicted as criminals, while Arabs and Muslims are traditionally portrayed as terrorists.

Black and brown boys seldom look at movie screens to see heroic representations of themselves. They often see men of their ethnic/racial group hypermasculinised and used as target practise by the white protagonist. At the end of such movies, the audience is moved to cheer the killing of the racialised “monster” in an act of symbolic lynching of the perceived non-human evildoer.

Even animations meant for younger audiences link racial otherness to monstrosity. Cartoons of the 1990s like Disney’s Gargoyles (1994-97) and Fox’s X-men (1992-97), for example, treat physical differences as both sources of great persecution and great power.

Though they are defanged and declawed, these representations of people of colour are not much different than the monsters of medieval Europe. Every Halloween these cliched stereotypes resurface as costumes, poor in taste and imagination.

Racialised representations also dominate American politics. In political discourse and the media, people of colour are stripped of their humanity and presented as brutish criminals – walking, breathing threats to prosperous white suburbia.

US President Donald Trump built his entire political career on invoking modern incarnations of classic monsters, such as “cartel banditos“, “Muslim terrorists ” or “black thugs “. He, like much of the US political establishment, has put these portrayals to use to justify inhumane policies.

References to Latino men as drug dealers and rapists are used to justify militarised border control policies at the US-Mexico border which has resulted in the detention of 76,000 minors and the deaths over a dozen children this year.

Representations of Muslims as terrorists have helped pass a Muslim ban in the US, which apart from denying people escaping warzones the right to seek safety in the US, has also kept terminally ill children  from the embrace of their parents.

Portrayals of black people as “thugs” and crime as intrinsic to black communities have been used to justify high incarceration rates for black men (for even the smallest infractions), police violence and state neglect of black neighbourhoods.

Children of colour are inevitably affected by these policies targeting their communities. They are caged, spied on and shot in cold blood because Americans surround themselves with myths that make them believe these children will grow up to be monsters.

This Halloween, white supremacy will once again project its fear of the racial other on to fictional monstrosity. While some children will get dressed as monsters to celebrate the holiday, others will have to struggle with the fact that they will inevitably be treated as monsters all their lives because of the colour of their skin.

UN General Assembly 2019: Speaker schedule and what to expect