US Vice President Mike Pence and President Donald Trump’s personal lawyer Rudy Giuliani said on Tuesday they will not cooperate with the House of Representatives impeachment inquiry into Trump’s efforts to pressure Ukraine to investigate a political rival. 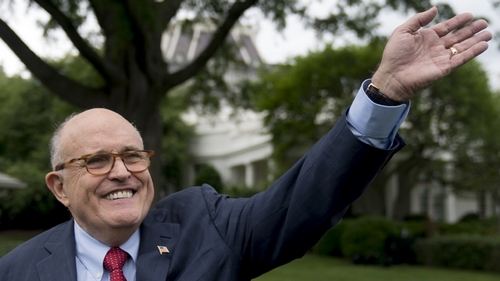 The decision to defy congressional subpoenas opens the two men to possible contempt of Congress charges and illustrates Republican Trump’s determination to stonewall the Democratic-led impeachment effort, which threatens to consume his presidency.

In a letter sent to a lawyer for House leaders on Tuesday, Giuliani’s lawyer said the inquiry was illegitimate, and that information they have sought relating to his work in Ukraine is potentially protected by attorney-client privilege and executive privilege.

“In addition, the subpoena is overbroad, unduly burdensome, and seeks documents beyond the scope of legitimate inquiry,” Jon Sale, Giuliani’s lawyer, wrote.

The House Intelligence Committee had asked Giuliani to hand over by Tuesday documents related to Trump’s effort to allegedly pressure Ukrainian President Volodymyr Zelensky to investigate Joe Biden, a top contender for the Democratic nomination in the 2020 election, and his son. The House is trying to determine if Trump used $400m in military aid as leverage.

There has been no evidence of wrongdoing by the Bidens.

A whistle-blower complaint concerning a July 25 phone call between Trump and Zelensky, in which the US president pushed for that investigation, initially launched the House impeachment probe.

A lawyer for Pence sent a similar letter to House committees late on Tuesday, saying the vice president would not comply.

In the letter, lawyer Matthew Morgan slammed what he called a “purported ‘impeachment inquiry'”. He claimed it “has been designed and implemented in a manner that calls into question” the members’ “commitment to fundamental fairness and due process rights”.

Giuliani’s lawyer, Sale, said his client’s resistance mirrors that of the White House, who last week sent a letter to the House saying they would not cooperate with the inquiry.

In that letter, White House counsel Pat Cipollone said House Democrats wanted to “overturn the results of the 2016 election and deprive the American people of the president they have freely chosen”. He also said the impeachment probe denied Trump “due process” and was not official because it had not been voted on by the House.

House Speaker Nancy Pelosi fired back, calling the letter “manifestly wrong” and describing it as “another unlawful attempt to hide the facts”.

Many legal experts have rejected Cipollone and Giuliani’s arguments that the impeachment investigation is unconstitutional. Impeachment lawyers have said the House has broad authority to set the ground rules for an inquiry under the US Constitution.

As part of the White House’s non-cooperation, the State Department has repeatedly attempted to block agency staff from testifying before the House.

Last week, the testimony of Gordon Sondland, the ambassador to the EU, was blocked by the State Department. Sondland’s lawyer has since said he will testify on Thursday.

Giuliani, the former mayor of New York City, became closely involved with Ukraine in the months leading up to the July 25 phone call, often rankling administration officials in his blurring of official and unofficial objectives.

In closed-door testimonies by various officials as part of the House’s impeachment probe, Giuliani’s name has continually to come up.

She said Bolton described Giuliani as a “hand grenade who is going to blow everybody up”, according to the New York Times newspaper.

At the request of Bolton, Hill also said she had at least two meetings with National Security Council lawyer John Eisenberg about Giuliani’s conduct.

Giuliani and his associates also apparently lead a successful campaign to have the then-Ambassador to Ukraine Marie Yovanovitch recalled from her post.

Giuliani had accused Yovanovitch of blocking efforts to persuade Ukraine to investigate the Bidens. The former mayor had also provided information to Trump and the State Department about Yovanovitch, who he suggested was biased against the president.

He has said he took those actions “in my role as a defence lawyer” for Trump.

According to an indictment, the businessmen had lobbied a US congressman in 2018 for help deposing Yovanovitch. The indictment also alleges that the men leveraged a flurry of GOP political donations to force Yovanovitch’s removal, an effort prosecutors say was aided by laundered foreign money.

In her testimony to the House on Friday, Yovanovitch recounted that she had been notified of “a concerted campaign” against her.

She added that she was “incredulous that the US government chose to remove an ambassador based, as best as I can tell, on unfounded and false claims by people with clearly questionable motives”.

Rogue Biden to step back from Chinese company ship

Riding around Puerto Rico with a truck driver