They say sunlight is the best disinfectant, but we also know that too much of it can land you in hospital. It can even give you cancer. It is a lot better for your health, they say, to take it in moderate doses and maybe spend a bit of time indoors during the summer, too. 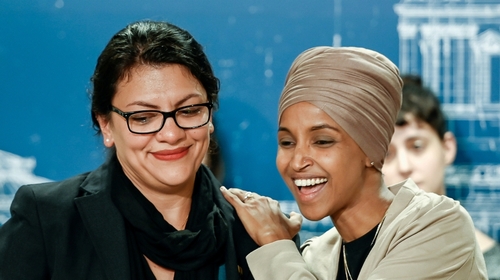 US Representatives Rashida Tlaib and Ilhan Omar react as they discuss travel restrictions to Palestine during a news conference in St Paul, Minnesota, August 19, 2019 Caroline Yang/Reuters

And that pretty much sums up the way I feel about a recent article haphazardly criticising American Muslim organisations of being comprised and the community of lacking courage in the face of US imperialism and the Trump administration’s unapologetically white supremacist global agenda.

I agree – some American Muslim figures have made back door deals with governments and media that have not only been shocking but are tantamount to betrayal. And I concede that a lot of well-intended political calculations have gone terribly astray.

But, none of this is particularly new or even remarkable. Some American Muslim leaders, for example, were in with George HW Bush way before Donald Trump ever thought about being president. In fact, Bush would not have ever been president if it weren’t for the Muslim vote supporting him in Florida back in 2000 elections. Remember how close that race was?

We can and we should hold our leadership – or those who present themselves as leaders – accountable, publicly, privately, and with passion.

But, in doing so, we really cannot afford during this political moment to give the false impression to a global audience that American Muslim institutions are rolling over in selfish fear or basking in opportunism. No. In fact, American Muslims are at the centre of the resistance both at home and abroad. In the face of violent attacks, death threats, child internment camps, and a society crumbling before our eyes, it is the stories of American Muslims fighting for justice that deserve to be uplifted and praised.

To begin with, there is no denying that the first two elected American Muslim women in Congress, along with other elected women of colour, are leading the resistance to the Trump administration and the right-wing movement that is trying to control the United States. In fact, Representatives Rashida Tlaib and Ilhan Omar are not simply individuals, but icons of a movement and culture that has deep roots across the American Muslim community.

Since 2016, hundreds of American Muslims have run for office in the face of bigotry and personal risk, placing themselves in school boards, state legislatures, and national offices as part of the wider movement to control the damage of the Trump blaze.

Far more unknown, and far less celebrated, are the professional career staffers in the halls of federal and state agencies working to do what they can to help all people at risk of falling victim to the xenophobic policies the administration is trying to implement. They are the ones responsible for working to help US citizens trapped in foreign jails, to end government surveillance systems, and to prevent dangerous policies from ever manifesting.

Yes, there are many who are happy to go with the flow and run in the dangerous playgrounds of the powerful, but there are many more unsung (s)heroes who will never be known.

But, long before Tlaib and Omar captured international attention, grassroots activists like Linda Sarsour and Zahra Billoo have been working tirelessly at local levels with progressive-leftist activists across religious and racial lines to secure the dignity and rights of the most marginalised.

Also consider scholar-activist Najeeba Syeed, who has been working in interfaith conflict resolution and prison reform in Los Angeles for decades, or Ameena Matthews, who fearlessly led gang intervention work in Chicago and is now running for Congress, or Representative Movita Johnson-Harrel, fighting for gun reform and inner city development in Philadelphia.

And far below the headlines are groups like MPower Change and the Muslim Power Building Project, who fight it out, hour after hour, building a new generation of advocates working for a better future.

Muslims are also working outside of the halls of power. Consider the impossible work of raising awareness about and challenging the treatment of prisoners in Guantanamo carried out by Dr Maha Hilal and Darakshan Raja of the Justice for Muslims Collective, or that of the Muslim Justice League fighting government-sponsored “countering violent extremism” (CVE) initiatives in Boston, and similar work carried out by activists in Los Angeles who actually forced its mayor to turn down a Trump CVE grant.

And what about the Muslims at the front lines of the interfaith movement, calling attention to the horrid treatment of migrants at the southern border.

Are these people or organisations that lack courage? That lack principle?

Likewise, for the small handful of compromised imams and scholars, there are dozens at the minbar and in the classroom guiding flocks of Muslims towards justice. Consider, Imam Omar Sulaiman, Imam Zaid Shakir, and Tarek Messidi who have most recently helped raise over $100,000 to help separated migrant families reunite. What about Imam Talib Abdul Rashid and Sister Aisha al-Adawiya in New York City who carry the flag of Brother El-Hajj Malik Shabazz, Malcolm X, every day of their lives.

Most courageous are the sisters who fight injustice in our communities, such as Alia Salem, who works to expose the abuses taking place in our own mosques; or the likes of Dalia Mogahed, one of the most well-respected Muslim-American activists in the world, who faces mob-like attacks from our own community for merely supporting her fellow sisters. Are we still lacking courage?

What of the legal battles? Muslims continue to challenge the Muslim ban even after the Supreme Court supposedly shut the case and fight the government “watchlist” and the grotesque norm of “flying while Muslim”. There are also those who defend the right to protest and boycott, to not let the flag of Palestine fall by defending the BDS movement across the country, allowing groups like American Muslims for Palestine to continue to make this a mainstream issue. Are these our compromised institutions?

And what about the humanitarians, the visionaries, the creatives? Islamic Relief has been supplying Flint, Michigan with clean water for years, while the Islamic Circle of North America Relief has set up shelters for abused women.

Doctors at the Islamic Medical Association of North America have been sending medical missions to the barefoot and burdened in Turkey, Jordan, Lebanon, and Syria. The millennial startup pioneers at Launchgood have raised nearly $100m on thousands of charitable projects around the world.

Media advocates such as Marya Bangee at SILA and Harness have been working inside Hollywood studios to make sure that our representation is correct, while people like Dr Maytha Alhassen have been providing informed but trenchant critiques of the industry.

Politics is messy and you can find stains anywhere if you look hard enough. But the community I know is one of courage and principle, and will never be tarnished by the actions of a few of its figureheads.

Where do top Democrats stand on gun control?