US President Donald Trump on Wednesday lauded his relationship with Turkish President Recep Tayyip Erdogan as the leaders met to overcome mounting differences ranging from policies towards Syria to Ankara’s purchase of a Russian missile defence system.

Trump’s warm welcome of the Turkish president came amid anger in the United States Congress about Ankara’s offensive into Syria to drive out Kurdish forces, one of Washington’s main partners in the fight against Islamic State of Iraq and the Levant (ISIL or ISIS).

“We’ve been friends for a long time, almost from day-one. We understand each others’ country. We understand where we are coming from,” Trump told Erdogan as they sat next to each other in the Oval Office earlier on the day.

“They’re highly respected in their country and in the region,” Trump said of Erdogan and his wife Emine. 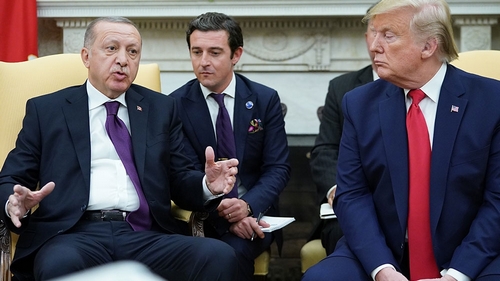 Marwan Bishara, Al Jazeera’s senior political analyst, said he could not “imagine that President Erdogan could have had a better reception especially after all the rocky months and years under former US President Barack Obama and under Trump”.

Later on Wednesday, Trump said at a news conference with Erdogan the two leaders had a “wonderful and productive meeting”, adding that he hoped the NATO allies would be able to resolve their differences.

Among the challenges is Turkey’s purchase of the Russian S-400 defence system, which prompted Washington to remove Ankara from the F-35 fighter jet programme.

Turkey shrugged off threats of US sanctions and began receiving its first S-400 deliveries in July, but so far, the US has not imposed any sanctions.

The House of Representatives last month passed a sanctions package to punish Turkey over the purchase of the Russian defence system and Ankara’s Syria operation. Key members of the Senate have pledged to advance the legislation if Ankara endangers the Kurds in Syria.

“Turkey’s acquisition of sophisticated Russian military equipment, such as the S-400, creates some very serious challenges for us and we are talking about it constantly,” Trump said during Wednesday’s news conference.

“We talked about it today, we’re talking about it in the future, hopefully, we’ll be able to resolve that situation,” he added.

Speaking through a translator, Erdogan said that the two countries could “only surmount the hurdles that we experience through dialogue”.

Five Republican senators, including vocal Turkey critic Lindsey Graham, came to the White House and spoke with Erdogan and Trump about the F-35 programme.

The senators also pressed Erdogan on Turkey’s treatment of the Kurds in Syria.

Wednesday’s meeting comes a month after Turkey launched a military operation against the Kurdish People’s Protection Units (YPG) forces in northeast Syria. Turkey views the YPG as an offshoot of the armed Kurdistan Workers’ Party (PKK), which is considered a “terrorist” group by Ankara and several Western countries.

The operation ended with the Kurdish YPG forced to withdraw from some Syria-Turkey border regions, but Ankara says the armed group has not fully left the areas.

“The Kurds have risked a lot to stand with America and fight our shared enemy and there is very real concern that we do not want to see Turkey engaged in offensive actions against the Kurds,” US Senator Ted Cruz said on Wednesday. 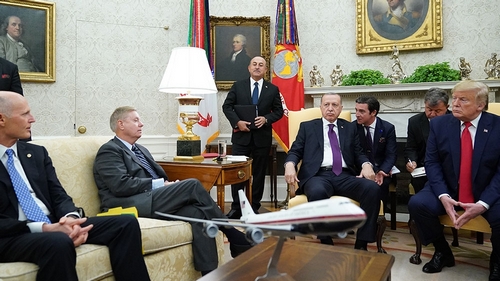 For his part, Erdogan distinguished the Kurds from the PKK.

“I assure you the ones that you’re referring to as ‘Kurds’ are PYD or YPG and they are offshoots of the PKK,” he said.

He also expressed his frustration that other nations have not done more to support Turkey with refugees.

“When nobody was accepting these refugees, we did,” he said.

Erdogan also said he was “deeply hurt” by the House resolution recognising the killings of 1.5 million Armenians a century ago as a “genocide”, a label Turkey rejects.

Erdogan said the measure has the potential to cast a “deep shadow over our bilateral relations”.

Who are the 2020 US Democratic presidential candidates?