In January this year, US President Donald Trump stunned many in Venezuela by giving his backing to opposition leader Juan Guaido after he proclaimed himself acting president of the country. 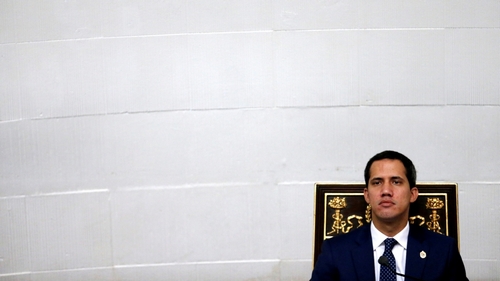 Venezuelan opposition leader Juan Guaido, who many nations have recognised as acting president, attends a session of the national assembly in Caracas, Venezuela Aug 20, 2019 Manaure Quintero/Reuters

Since then, the US has made a series of unprecedented political, economic and diplomatic moves in an attempt to hasten the removal of President Nicolas Maduro. The Trump administration attempted to legitimise these actions by arguing that Maduro’s “illegitimate” government, which came to power due to “fraudulent elections” has transformed Venezuela into a “failed state” and made it the epicentre of a humanitarian crisis with a major regional spillover.

For Trump, returning Venezuela into the US sphere of influence is clearly a foreign policy priority on a par with subduing Iran or countering China. But why is the US president so determined to facilitate regime change in Venezuela and is he likely to succeed?

The US president has several reasons for trying to get rid of Venezuela’s Chavista government and they have to do with both domestic and international politics.

First, Trump wants the United States to have control over Venezuela’s vast oil reserves and knows that he cannot achieve this while Maduro’s left-wing government is in power. Consecutive US administrations have also worked hard to eliminate any actor that poses a threat to US oil imports and Trump’s is no different.

Some analysts have recently suggested that a desire to control Venezuela’s oil reserves cannot be the reason behind Washington’s insistence on pushing for regime change in the country. They have argued that US oil companies would be reluctant to develop Venezuelan’s heavy crude oil at a time when domestic oil production is increasing.

This is not a valid argument, however. Although the US is indeed significantly less dependent on Venezuelan oil than it was 10 years ago, Washington still views having control over the largest proven oil reserves as an important strategic advantage in a world which still runs on fossil fuel.

Moreover, there is reason to believe US oil companies are still interested in Venezuela’s reserves. Trump has appointed people associated with the US oil lobby, such as John Bolton, Elliot Abrams and Mike Pompeo, to key positions in his administration. These people, undoubtedly, have in mind the oil industry’s interests when they are making decisions about US foreign policy on Venezuela and its support for the opposition.

Trump indeed wants the US to have direct say in Venezuela’s oil industry, but perhaps even more urgently, he wants to make sure China or Russia does not control this strategic resource.

When Hugo Chavez became Venezuela’s president in 1999, anti-US sentiments started to spread rapidly in the country and the wider region, which allowed Russia and China to increase their influence in Latin America. In response, the US took steps to strengthen its relations with other countries in the region such as Colombia and Argentina. After taking office, Trump took the polarisation in the region to the next level, transforming Venezuela into a battleground for the competition between global powers.

There are also domestic reasons for Trump’s interest in the demise of the Venezuelan government.

First of all, there is a large and fervently anti-Maduro Venezuelan community living in Florida, a state which has historically played a key role in deciding the winner of the US presidential elections. Trump wants to secure the support of Florida residents – many of whom hail from Latin America and support the Venezuelan opposition – in the 2020 election and he knows the way to achieve this is to convince them that he is doing everything he possibly can to topple the Chavista government.

Another reason behind Trump’s obsession with toppling the Maduro government is related to the rise of the Democratic Party’s “socialist” wing. The US president feels threatened by the popularity of the likes of Senator Bernie Sanders (who has polled ahead of him in a number of swing states) and House Representative Alexandra Ocasio-Cortez.

In response, Trump has started to equate in his rhetoric progressive policies with Chavismo and use the failures of the Maduro government to convince the US electorate that a progressive Democratic president would only bring economic collapse and social devastation.

After 65 countries, including the US, announced their support for Guaido’s self-declared presidency, many assumed the Maduro government’s days were numbered. Trump froze all Venezuelan government assets in the US and imposed crippling sanctions on the country. Meanwhile, Bolton warned of potential military action against Venezuela. None of this, however, proved enough to unseat the embattled Venezuelan president.

Maduro has managed to hold on to his seat this long mainly because Venezuela’s influential military has stood by him. The diplomatic and economic support he received from China and Russia have also helped retain power, and so did to a certain extent the European Union with its affirmation that it would not support any military action against the government.

But none of this guarantees the Chavista government’s long-term survival. Given his failures in other foreign policy adventures – including his inability to strike a deal with North Korea and to bring down Iran – Trump could still decide to pursue the Venezuela file in order to guarantee his re-election. Earlier this month, he imposed an expansive economic embargo on the country to show the world that he has no intention of giving up. His next step could be signing off on a military intervention.

If Trump succeeds in orchestrating the demise of Chavismo in Venezuela, this would be the most important “victory” of his presidency. If he fails, however, it will certainly go down in history as one of the greatest blunders of American foreign policy.

No matter what happens, in the end, it will be the Venezuelan people bearing the brunt of Trump’s foreign policy experiments. The sanctions have already devastated the country and made life extremely difficult, especially for the country’s poor. A military intervention would certainly result in a major humanitarian catastrophe and unimaginable human loss.

Rights groups slam US plan to collect DNA from migrants