US President Donald Trump has said it was “too soon” for him to meet Iranian Foreign Affairs Minister Mohammad Javad Zarif, who made a surprise visit to the G7 meeting in France following an invitation by French President Emmanuel Macron. 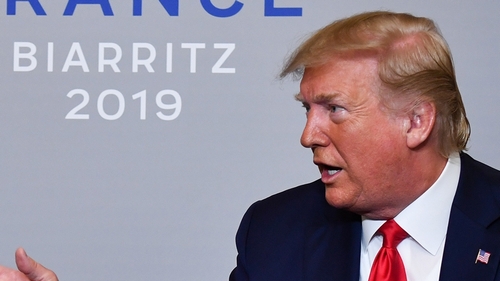 Macron has been trying to salvage the 2015 nuclear deal between the United States, Europe, Iran and Russia after Trump pulled out of the deal last year. But Trump told reporters at the G7 meeting on Monday that he was not surprised at France inviting Zarif.

The US president did say, however, he did not think the time was right yet for him to sit with Zarif.

“It’s too soon to meet, I didn’t want to,” Trump said, adding that he wants to see a “strong Iran” and that he was not looking for regime change in the country.

Trump has said he wants to force Iran into new talks that would include its ballistic missile programme and support for regional armed groups. But Iran has rejected that, saying Washington could not be trusted.

A year after the US’s exit from the nuclear deal, Tehran began scaling back some of its commitments under the accord.

In July, Washington imposed sanctions on Zarif, blocking any property or interest he had in the US.

US officials said the censure was meant to send a “clear message” to Iran as tensions further escalated over alleged Iranian aggression in the Strait of Hormuz, a significant trade route in the Gulf.

Met @EmmanuelMacron on sidelines of #G7Biarritz after extensive talks with @JY_LeDrian & Finance Min. followed by a joint briefing for UK/Germany.

Road ahead is difficult. But worth trying. pic.twitter.com/oXdACvt20T

Following Zarif’s visit to the G7 on Sunday, Iranian President Hassan Rouhani said Iran was open to dialogue even though talks with Western countries would have a slim chance of success.

“We should do our job and take action,” Rouhani told a crowd in Tehran.

“Even if the odds of success are not 90 percent but are 20 or 10 percent, we must move ahead with it. We should not miss opportunities.”

Zarif sent out a tweet on Sunday, saying Iran “was in pursuit of constructive engagement”.

“Road ahead is difficult. But worth trying,” he said.

In July, Iran’s government said it had rejected an offer from Trump for Zarif to visit the White House for talks while the latter was in New York for meetings at the United Nations.

Successfully Manage a Rebrand with These Simple Tips

Trump also responded on Monday to growing fears that a trade war between the US and China will lead to a global economic recession.

When asked by reporters, Trump said Chinese officials called American negotiators on Sunday in the hopes of restarting the conversation to solve the dispute.

The US and China have been entangled in a trade dispute, with both countries levying tariffs on each other’s goods, leading to China’s currency hitting an eleven-year low.