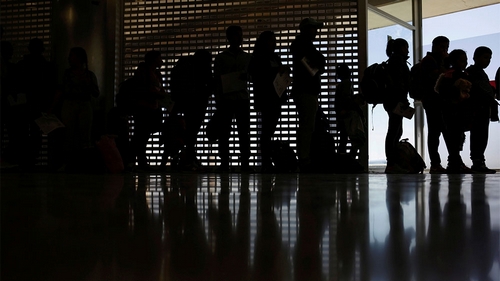 Honduran migrants stand in line at the airport after giving up their US asylum claims and voluntarily returning to Honduras, in Ciudad Juarez, Mexico Jose Luis Gonzalez/Reuters

The proposed regulations, posted by the US Justice Department on Tuesday, would require the collection of DNA samples from migrants aged 14 years or older who are held at US borders.

The new rule would allow the government to amass large amounts of genetic samples from hundreds of thousands of migrants seeking to enter the US, raising concerns and questions about the legality of collecting private information from persons who are not suspected of having committed a crime.

Rights groups have slammed the move, saying it is the latest step by the Trump administration to deter migrants from seeking asylum in the US. This measure, they add, conflates people who are seeking asylum, which is lawful under US and international law, with suspected criminals.

“In the past DNA collection has been used against people who have been arrested for criminal suspicion or convicted of a crime,” said Saira Hussain staff lawyer at the Electronic Frontier Foundation.

“It is concerning to see this tool being applied to a huge and wide-ranging group of people,” Hussain told Al Jazeera.

Experts say, unlike fingerprints which only identify identity, DNA reveals far more personal and private information about an individual, such as health conditions and genetic connections. And it can be used for a number of different purposes.

That information, which will be collected by cheek swabs, will then be fed into the FBI’s database, a tool known as the Combined DNA Index System (CODIS). It is used to investigate criminal cases. The profiles will remain in the system indefinitely and the only way to have them removed is through a request by a lawyer.

Trump administration officials have said the collection of DNA would help solve crimes committed by immigrants, and ensure that families travelling together are in fact related to each other.

Alex Nowrasteh, director of immigration studies at the Cato Institute’s Center for Global Liberty and Prosperity said current procedures of collecting fingerprints and biometrics are more than sufficient to identify and keep criminals from entering the US.

“The purpose of this is to place more burdens on apprehended immigrants and asylum seekers, to raise the costs of them coming here, to humiliate some and to deter others,” Nowrasteh said.

“Most immigration actions along the US border are to accomplish those goals, and this is consistent with that,” he told Al Jazeera.

Curbing immigration has been a core political issue for the Trump administration and the focus of a series of recent legislations that have made accessing asylum in the US more difficult.

The US has struggled to contain a growing flow of migrants, mostly Central Americans fleeing gang violence, political persecution and extreme poverty. Most try to enter through the country’s southern border with Mexico. Officials say over 810,000 people were detained at US borders this budget year, a record high.

Officials said this new administrative measure is currently a pilot programme, meaning it is expected to be expanded in the near future, requiring more people to succumb to the testing.

Emily Arnold-Fernandez, President and CEO of Asylum Access, a non-profit organisation, points to the “Remain in Mexico” policy, which took effect this year and requires asylum applicants to stay in Mexico while their case is being processed. Arnold-Fernandez says it has made the process of talking to a US lawyer and putting together evidence needed to present to a US court, much more difficult.

“The Trump administration has been erecting a wide array of barriers, this is just one of many barriers that are making it difficult for people to seek asylum,” she told Al Jazeera.

The Mexican Foreign Ministry in a statement on Tuesday expressed concern over the new rule, adding that they would pay close attention to the implementation of the new policy to ensure “the appropriate use and respect for the privacy of information of Mexican citizens”.

In a tweet, the American Civil Liberties Union (ACLU) criticised the regulation, saying “this proposed rule is extraordinary in how sweeping and clearly xenophobic it is. Congress must prevent money from being used for this forced DNA collection.”

This proposed rule is extraordinary in how sweeping and clearly xenophobic it is.

Congress must prevent money from being used for this forced DNA collection. https://t.co/b1ouj1VOTG

Rights groups are expected to challenge the rule in court. The public will have until November 12 to comment on the proposed rule.

Robert McAndrews, a professor at Salem State University specialising in asylum and immigration issues says that policy is an integral part of the political messaging that the Trump administration has been trying to do over the past three years – that they are in favour of curbing immigrants from entering the US.

“Requiring DNA of asylum seekers and immigrants crossing a border sends a clear signal to the public, that the Trump administration sees immigrants as a criminal threat to the people of the United States,” McAndrews told Al Jazeera.

“It is a detail in the overall strategy that they think some parts of the American electorate wants to hear.”

US to begin roundup of undocumented migrants on Sunday