The House resolution, a non-binding expression of congressional sentiment, won bipartisan support with a  398-17 vote. 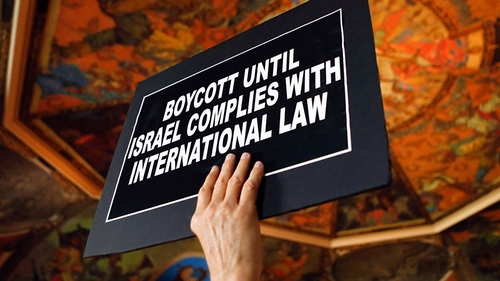 Supporters of the bill argued the BDS movement is harmful because it seeks to delegitimise Israel and is incompatible with support for a two-state solution.

But opponents say that even though the resolution is non-binding, “it still very troubling”.

“They are misguided with this resolution. Americans have a right to protest,” said Abed Ayoub, the national policy director for the American-Arab Anti-Discrimination Committee.

“BDS itself is working to end the oppression of Palestinians and what Israel does to allow that to happen. It is pushing for Israel to comply with international law. So there is nothing wrong with the BDS movement,” Ayoub told Al Jazeera. “The issue here is the aggressions and the policies put forward by Israel and how we are turning a blind eye on those as a nation. There should be resolutions against the occupation, against the checkpoints and other human rights violations Israel is perpetrating on Palestinians.”

The BDS movement was launched in 2005 by Palestinians to  generate international pressure on Israel to respect Palestinian human rights. Supporters say the effort draws from the anti-apartheid campaign in South Africa in the 1980s and the earlier African American Civil Rights movement of the 1950s and 60s.

But by targeting Israel for criticism and blaming it for the Israeli-Palestinian conflict, advocates of the anti-BDS resolution claimed the movement is anti-Semitic and should be rejected.

“BDS’s mission is to delegitimise Israel regardless of its policies and to undercut and deny the Jewish people the opportunity for self-determination,” said Democratic Representative Jerrold Nadler.

The House bill acknowledges the First Amendment rights of BDS supporters to express their views through boycotts even as it seeks to condemn the movement.

Republicans urged Democrats to pass legislation already approved by the Senate that would “put some teeth” into the resolution by allowing state and local governments to punish BDS supporters – individuals and companies – by canceling business contracts.

But House Democrats have voiced concerns that the Senate bill goes too far under the US Constitution by authorising government to penalise free speech otherwise guaranteed by the First Amendment. House Speaker Nancy Pelosi has not allowed the Senate bill to come to a vote.

Both the national and state-level measures prompted Democratic Representatives Ilhan Omar and Rashida Tlaib to introduce a resolution last week affirming that all Americans have the right to participate in boycotts in pursuit of civil and human rights.

The resolution won co-sponsorship from 16-term Representative John Lewis, a US civil rights leader who had campaigned with Martin Luther King in the 1960s. It is unclear when the bill might come to the House for debate and vote.

That resolution “reassures us that progressives, including in Congress, are defending freedom of expression and the right of oppressed communities, including Palestinians, to peacefully fight for their rights,” Palestinian rights activist Hind Awwad said in a statement posted on the BDS Movement’s website on July 17.

Trump to deploy more troops to Saudi Arabia after attack

Fourth of July: US Independence, and a ‘show of a lifetime’