The United States on Thursday demanded Iran immediately release a vessel it seized in the Gulf as a US military commander said Washington would work “aggressively” to ensure free passage of vessels through the vital waterway. 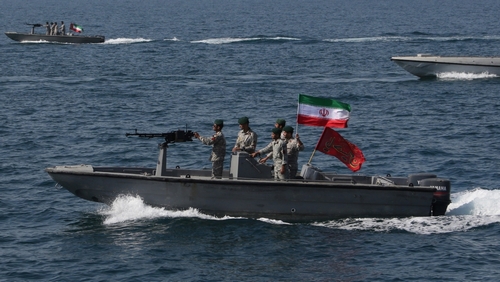 Responding to an announcement by Iran’s Revolutionary Guard that it captured a foreign tanker smuggling fuel, the US State Department insisted Iran must free the ship and its crew and stop harassing vessels in and around the Strait of Hormuz.

The US blames Iran for a series of attacks on shipping since mid-May in the world’s most important oil artery, accusations Tehran rejects. The incidents have raised fears the long-time foes could stumble into war.

“The United States strongly condemns the Islamic Revolutionary Guard Corps Navy’s continued harassment of vessels and interference with safe passage in and around the Strait of Hormuz,” a State Department spokesperson said in an email to Reuters news agency.

“Iran must cease this illicit activity and release the reportedly seized crew and vessel immediately.”

The impounded vessel was “smuggling one million litres of fuel” from Iranian smugglers to foreign customers, it said.

Oil shipping monitor TankerTrackers reported the Panamanian-flagged tanker Riah, used in the Strait of Hormuz “for fuelling other vessels”, crossed into Iranian waters on Sunday. It said the tanker’s automatic identification system had then stopped sending signals.

The announcement came a day after Iran’s foreign ministry said its forces assisted a foreign ship “with technical failure” after it sent out a distress call. The Guard did not confirm whether the vessel was the same one.

“The state TV, quoting the commander of the Revolutionary Guard, said Iran will not stand for this kind of piracy in the Strait of Hormuz,” said Al Jazeera’s Dorsa Jabbari, reporting from Tehran.

US Central Command chief Kenneth McKenzie pledged on Thursday to ensure freedom of navigation in the highly sensitive Gulf waters, a conduit for much of the world’s crude oil.

“We are going to work very aggressively with our partners… to come to a solution that will enable the free passage of critical oil and other commodities… through the region,” McKenzie told reporters at an air base in Saudi Arabia, a key US ally.

Iran has threatened to close the Strait of Hormuz – through which almost one-fifth of the world’s oil passes – if it cannot export its oil. The Trump administration is trying to block Iran’s exports as a way to pressure it to renegotiate the landmark 2015 nuclear deal it abandoned last year.

The United States is not aiming to set up a military coalition against Iran with its new security initiative in the Gulf but simply “shining a flashlight” in the region to deter attacks on commercial ships, a top Pentagon official said.

Kathryn Wheelbarger, who briefed NATO allies this week on the US proposal, said it was less operational and more geared towards increasing surveillance capabilities.

“This is not a coalition against Iran… If you were militarily confronting Iran, this is not the construct that you would use,” said Wheelbarger. “The goal is to increase maritime domain awareness and surveillance capabilities in the region to dissuade malign action.”

Her comments came as US President Donald Trump announced the American navy in the Strait of Hormuz shot down an Iranian drone that came within 1,000 yards of one of its vessels – further ratcheting up tensions in the Gulf.

The USS Boxer “took defensive action” against the unmanned aerial vehicle as it was “threatening the safety of the ship and the ship’s crew”, Trump announced at the White House.

“The drone was immediately destroyed,” he added.

However, Iranian Foreign Minister Mohammad Javad Zarif said there was “no information about losing a drone today”.

The head of the Revolutionary Guard warned on Thursday against any aggression against his country.

“Iran has adopted a defensive strategy but if our enemies make any mistakes… our strategy can become an offensive one,” Hossein Salami was quoted as saying by the semi-official Tasnim news agency.

The questions over Riah’s status come amid heightened tensions between Tehran and Washington over the former’s nuclear programme and a standoff between Iran and the United Kingdom over the British Royal Marines’ seizure of a tanker carrying Iranian oil earlier in July.

The vessel was held on the suspicion it was heading to Syria in violation of European Union sanctions.

Tehran has called on the UK to release the vessel immediately, with Iran’s Supreme Leader Ali Hosseini Khamenei saying his country will retaliate over the seizure of the supertanker carrying 2.1 million barrels of light crude oil.

Gibraltar’s Chief Minister Fabian Picardo had a “constructive and positive” meeting with Iranian officials in London on Wednesday over the detained Grace 1, the government said.

“The chief minister met yesterday in London with Iranian officials to discuss matters related to the detention of Grace 1 and to seek to de-escalate all aspects of the issues arising,” a spokesman said.

In a phone call, Putin and Macron agreed the deal – known as the Joint Comprehensive Plan of Action – was an “important factor in ensuring security in the Middle East and maintaining non-proliferation regime”, the Kremlin said in a statement.

“Both sides stressed the advisability of consolidating efforts of all countries that are interested in preserving the Comprehensive Plan,” it added.