The United States will destroy any Iranian drones that fly too close to its ships and has “clear evidence” that it shot down such a drone on Thursday, a senior Trump administration official said. 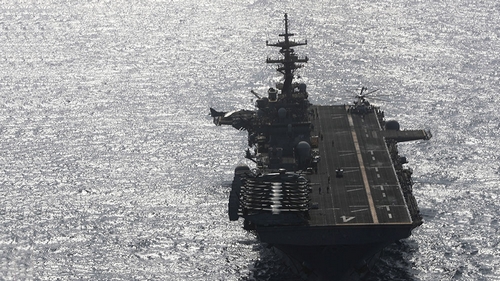 USS Boxer sails in the Arabian Sea off Oman on July 17, 2019 Ahmed Jadallah/Reuters

“If they fly too close to our ships, they’ll continue to be shot down,” the official told reporters at a briefing on Friday.

The comments came a day after US President Donald Trump said the US Navy “destroyed” an Iranian drone in the Strait of Hormuz after it threatened the vessel, a claim Iran denied.

“This is the latest of many provocative and hostile actions by Iran against vessels operating in international waters. The US reserves the right to defend our personnel, facilities and interests,” Trump said on Thursday.

“The drone was immediately destroyed,” he added. The Pentagon later said the Navy ship had taken “defensive action” against an Iranian drone at 10am local time (07:00 GMT) on Thursday.

“We have not lost any drone in the Strait of Hormuz nor anywhere else. I am worried that USS Boxer has shot down their own UAS Unmanned Aerial System by mistake!” he wrote.

Later on Friday, Iran’s Islamic Revolutionary Guard Corps (IRGC) released video it said proves the US warship did not destroy its drone.

Iranian state TV showed video it said was taken by an Iranian drone on Thursday of the USS Boxer and another American warship. The IRGC on its website said the drone recorded three hours of video of the USS Boxer and five other vessels Thursday starting when the ships first entered the Strait of Hormuz.

The senior Trump administration official on Friday said “we have very clear evidence” that US Navy warship USS Boxer shot down an Iranian drone. “We’re confident,” the official said.

A video of the incident could be released by the Pentagon, the official said.

Tensions in the Gulf are high, with fears that the US and Iran could stumble into outright military conflict.

Washington has blamed Tehran for a series of attacks since mid-May on shipping around the Strait of Hormuz, the world’s most important oil artery. Tehran rejects the allegations.

Iran in June shot down a US military surveillance drone in the Gulf with a surface-to-air missile. Iran said the drone was in its airspace, but Washington said it was in international skies.

At the time, Trump said he called off a retaliatory military attack on Iran at the last moment.

Mark Fitzpatrick, associate fellow at the US-based International Institute for Strategic Studies, said each of the incidents increases the potential for conflict.

“None of the incidents have resulted in casualties so far. The drones were unmanned in a way that was tit for tat,” he told Al Jazeera from Washington.

“They need to start talking to stop this escalatory cycle. Donald Trump himself has been saying he does want to talk with Iranians. So, what exactly is the US strategy? No one in Washington knows.”

Tensions between the two countries have escalated since last year when Trump withdrew the US from the 2015 Iran nuclear deal in which Tehran agreed to curb its nuclear programme in return for the lifting of sanctions.

Since then, the US has reinstated sanctions, saying it wants to renegotiate the accord and hold talks on Iran’s ballistic missiles programme and support for armed groups in the Middle East.

Iranian Foreign Minister Mohammad Javad Zarif, who is in New York for meeting at the United Nations, said Tehran could immediately ratify a document prescribing more intrusive inspections of its nuclear programme if the US abandoned its economic sanctions, an offer the US dismissed.

The Trump administration official said that Zarif appeared to have no decision-making ability and that Washington “would not consider anything from him serious”. The official added that the US would need to hear from the “supreme leader or the president” in order to have negotiations.

Zarif blamed Washington for the escalation of tensions and accused the Trump administration of “trying to starve our people” and “deplete our treasury” through economic sanctions.

“We live in a very dangerous environment,” he said. “The US has pushed itself and the rest of the world into probably the brink of an abyss.”

On Thursday, Washington demanded Iran immediately release a vessel it seized in the Gulf, and a US military commander in the region said the US would work “aggressively” to ensure free passage of vessels through the vital waterway.

US House Democrats to get some Mueller evidence