Ben Affleck has finally broken his silence to condemn Harvey Weinstein, saying the sexual harassment claims involving the film mogul made him sick.

‘I am saddened and angry that a man who I worked with used his position of power to intimidate, sexually harass and manipulate many women over decades,’ Affleck said in a statement on Tuesday.

‘The additional allegations of assault that I read this morning made me sick. This is completely unacceptable, and I find myself asking what I can do to make sure this doesn’t happen to others. 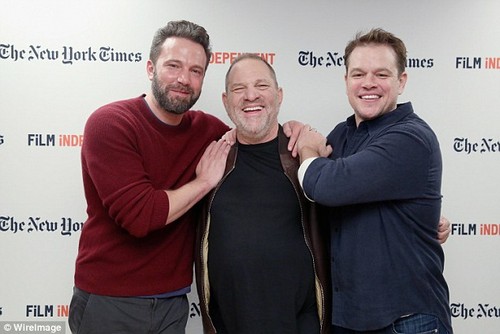 Ben Affleck has finally broken his silence to condemn Harvey Weinstein, saying the sexual harassment claims made him sick. Pressure is mounting on Matt Damon to also speak out

‘We need to do better at protecting our sisters, friends, co-workers and daughters. We must support those who come forward, condemn this type of behavior when we see it and help ensure there are more women in positions of power.’

Affleck and co-star Matt Damon owe their careers to Weinstein after winning an Oscar back in 1998 for best original screenplay for Good Will Hunting. The film, which they both starred in, was produced by The Weinstein Company.

It comes as pressure mounts on Damon to also speak out against Weinstein.

Affleck’s statement comes after he refused to respond to repeated requests for comment from Dailymail.com.

Actress Asia Argento and a former aspiring actress named Lucia Evans went on the record to allege Weinstein forced himself on them sexually. A third woman spoke anonymously.

A representative for Weinstein vehemently denied the allegations in a statement to the magazine.

Ivanka is lobbying Congress for a child tax credit hike