She may have been disinvited by Harvard and turned away from Canada, but Chelsea Manning earned applause, laughter and even some tears of empathy on Sunday from a friendly crowd at the annual New Yorker Festival.

Manning, who was released in May after seven years in military prison, was by turns impassioned, defensive, humorous and occasionally tearful in a panel discussion with New Yorker writer Larissa MacFarquhar.

She became emotional when asked what she thought the best result had been from her leaking of hundreds of thousands of classified documents to WikiLeaks.

‘Look, I haven’t had time to deal with these questions,’ she said. ‘All I’ve been doing is fighting for my life for the last seven years.’

The 29-year-old transgender woman was known as Bradley Manning when she was convicted and sentenced to 35 years in prison. In his last days in office, President Barack Obama commuted the rest of her sentence.

Manning has made only a few appearances since her release. Last month, Harvard University reversed a decision to name her a visiting fellow after CIA director Mike Pompeo scrapped a planned appearance over the designation, calling Manning an ‘American traitor.’ 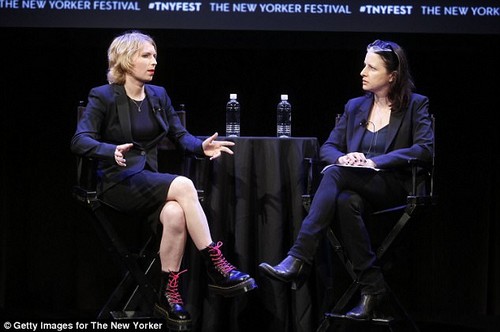 She was sentenced to 35 years in prison, but in his last days in office, President Barack Obama commuted the rest of her sentence

And Manning tweeted two weeks later that she’d been denied entry into Canada because of her U.S. criminal record.

While some see her as a traitor, others see her as a hero for exposing truths of war. One audience questioner cried as she mentioned the ordeal Manning had been through.

At times, Manning told MacFarquhar she was legally unable to go into certain details. And when asked how she would advise other aspiring leakers to proceed, she said simply that everyone needed to make their own decisions. But she responded forcefully when asked whether she’d been afraid that the release of her documents would hurt people by exposing the names of informants. She said the material included no such information.

‘There’s nothing sensitive in there, there’s no troop movements,’ she added. ‘It was a historical record of everything that had happened in Iraq and Afghanistan.’

Manning said that she decided to leak military documents when she was on leave back home in Washington, after watching the film All the President’s Men. Above, crowds waiting in line to see Manning speak on Sunday

Manning said she called the Washington Post and the New York Times from public phones and various Starbucks locations when she first tried to leak the documents. Above, crowds waiting in line to see Manning on Sunday

Manning eventually leaked to Wikileaks because the newspapers ran into issues establishing encrypted communications channels. Above, the venue where Manning spoke on Sunday

Manning spoke of her childhood in small-town Oklahoma – ‘a typical generic town in the middle of the country’ – her turbulent family life, and a short time living homeless on the streets of Chicago.

She said she’d learned to program computers by age eight or nine, and eventually joined the military because she thought ‘I could use my skills and make a difference.’ Once she got to Iraq, she said, she was overwhelmed by the death and destruction she saw.

On a 10-day leave back home in Washington, she said, she first tried to leak the documents to the Washington Post or The New York Times – simply because she had seen the 1976 movie ‘All the President’s Men.’

The movie tells the story of how Washington Post reporters Bob Woodward and Carl Bernstein uncover the details of the Watergate scandal that leads to President Nixon’s resignation.

Inspired to act but unwilling to trust email, Manning called the Post and Times from public phones at various Starbucks locations.

But the newspapers were unable to establish encrypted communications channels, so she went to WikiLeaks, because, she said, ‘I was running out of time.’

Manning spoke in detail of her time in prison, especially in solitary confinement. ‘Humans are a social creature,’ she said, fighting tears. ‘We need connections. We need to be with each other.’

She said she got through much of the seven years by setting small, incremental goals, like getting ‘from breakfast to lunch to dinner to sleep.’ When the rules forbid her to exercise, she said, she started to dance, and her guards didn’t stop her. So she thought, she said, ‘OK, that’s how I’ll exercise, like Zumba.’

Manning has now become an activist – for LGBT rights, for transparency in government, and also against what she called an alarming level of surveillance in society.

‘I feel like prison has encroached into the outside world,’ she said. ‘You’ve got militarized forces walking around on American streets. It’s quite frightening.’

She also had a message for engineers and software designers: Pay attention to the potential uses of what you’re designing, because it can be used for different purposes than intended.

Manning was asked by one tearful audience questioner whether her experience had made her ‘more cynical about fairness.’

‘I do have cynical moments,’ she said, tearing up again. ‘But then I get past them, you know? I turn to my friends, and I turn to my family… and then they cheer me up.’

Asked by another questioner what motivates her, Manning noted she’d been a DJ in the past.

‘I just set up my music equipment, and I’ve started making some tracks,’ she said. ‘I’m a little out of date.’

Gwyneth Paltrow is trolled for silence on Harvey Weinstein

Mother and four children killed in head-on crash in Oregon