Facebook had employees ’embedded’ in the offices of Donald Trump’s campaign to help his staff create the adverts that won the election, Trump’s digital director has claimed.

Brad Parscale says Hillary Clinton’s campaign rejected a similar offer of help from the social media giant, a move that seems to have put her at a disadvantage in the run up to the November vote.

During an interview with CBS News, Mr Parscale said that Facebook employees ‘would show up for work every day in our offices’ to help maximize their use of the social media website and target voters.

He claims that his campaign’s use of Facebook ended up winning Trump the election while Clinton staffers failed to take full advantage of the platform.

‘Facebook now lets you get to places and places possibly that you would never go with TV ads. Now, I can find, you know, 15 people in the Florida Panhandle that I would never buy a TV commercial for. And, we took opportunities that I think the other side didn’t.’

Mr Parscale also claims he was allowed to hand-pick Republican employees to help, but the company denies this.

Facebook insists it offered similar help to all candidates during the election.

In a statement released to CBS News, Facebook said: ‘We encourage all candidates, groups, and voters to use our platforms to engage in elections. We want it to be easy for people to find, follow and contact their elected representatives…

The 41-year-old, who had never worked on a Presidential campaign before helping propel Trump to the White House, said that his job focused on competing against Hillary Clinton’s campaign machine, which vastly outgunned the Republican campaign’s budget for TV adverts.

He also claimed that while ‘Donald Trump won… I think Facebook was the method – it was the highway in which his car drove on’. 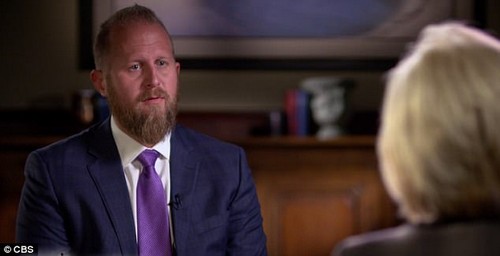 According to Mr Parscale, Google and Twitter workers were also working side-by-side in the same offices as Trump’s team to help then utilise those programmes as well

According to Mr Parscale, Google and Twitter staff were also working side-by-side in the same offices as Trump’s team to help then utilise those programmes as well.

He said: ‘I asked each one of them by email, I wanna know every, single secret button, click, technology you have. I wanna know everything you would tell Hillary’s campaign plus some. And I want your people here to teach me how to use it.’

I wanna know everything you would tell Hillary’s campaign plus some. And I want your people here to teach me how to use it

To ensure that no ‘Trojan Horses’ would infiltrate the Trump campaign and leak valuable information or tactics to the Democrats, Mr Parscale and his team said he would talk and vet potential employees to ensure they were Republicans and supported Trump’s Presidential tilt.

They would then come into the Trump campaign and sit beside Mr Parscale and his team, teaching them about the nuances of Facebook and then make on average 50-60,000 different automated adverts – sometimes ‘hundreds of thousands’ a day – which would change slightly depending on who they were aiming at.

It comes after Facebook said it would hand over the contents of more than 3,000 adverts bought by the Russians during the US Presidential race.

Facebook CEO has come under heavy scrutiny for the network’s potential role in influencing the election.

During a Facebook live stream, he said his company would try to do more to help protect the ‘integrity’ of elections.

Yet Zuckerberg conceded: ‘I wish I could tell you we’re going to be able to stop all interference, but that just wouldn’t be realistic. There will always be bad actors.’