But now commentators have rounded on the shamed movie mogul’s wife Georgina Chapman, 41, calling for a boycott of her fashion brand Marchesa.

Since meeting Weinstein at a party in Manhattan in 2004, the fortunes of Georgina’s brand have soared thanks to her partner’s impeccable connections which facilitated relationships between his wife and stars of his studio’s films.

Actresses including Nicole Kidman, Halle Berry, Jennifer Lawrence and Cate Blanchett have all starred in films produced by one of Weinstein’s companies and worn Georgina’s dresses to high profile events such as the Oscars and film premieres.

A fashion insider told Page Six: ‘Georgina always had a hard time pushing herself. For Harvey, promotion’s in his blood. He wasn’t exactly subtle about asking Miramax’s female stars to wear Marchesa on the red carpet.

‘If the studio chief of your movie, and potential movies, asked you to wear a certain designer, wouldn’t you want to accommodate him?’

Amid reports that Georgina is standing by her embattled husband, outraged commentators are now calling for a boycott of the label with one saying: ‘She supports sexual predators.’ 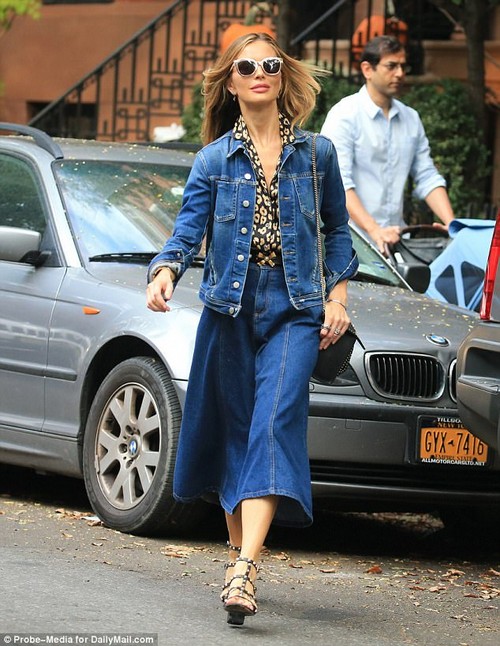 Chapman was seen on Friday, her first time in public since the allegations emerged about her husband 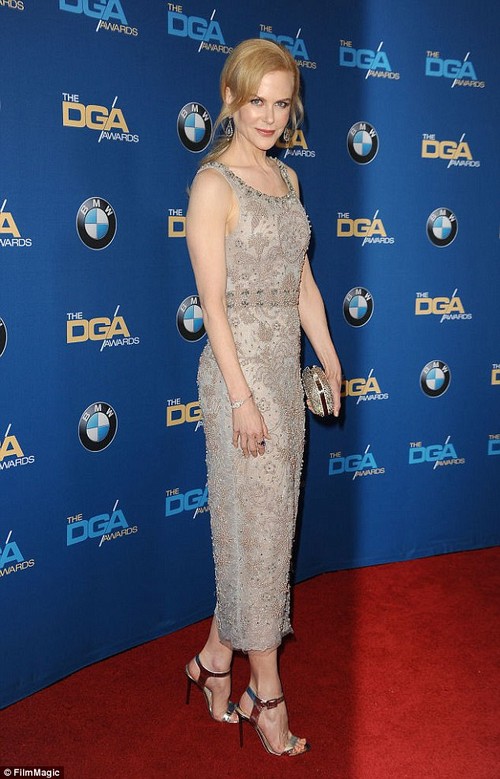 Nicole Kidman, who has starred in seven Weinstein films, wearing his wife’s label Marchesa on the red carpet at the Directors Guild of America Awards in February this year 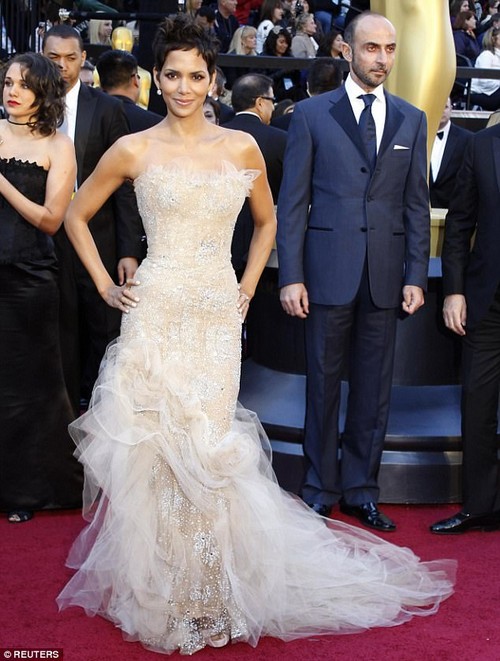 Halle Berry, in Marchesa at the 2011 Oscars, is one of the many stars who has appeared in a film produced by one of Weinstein’s companies and worn his wife wife’s designs on the red carpet 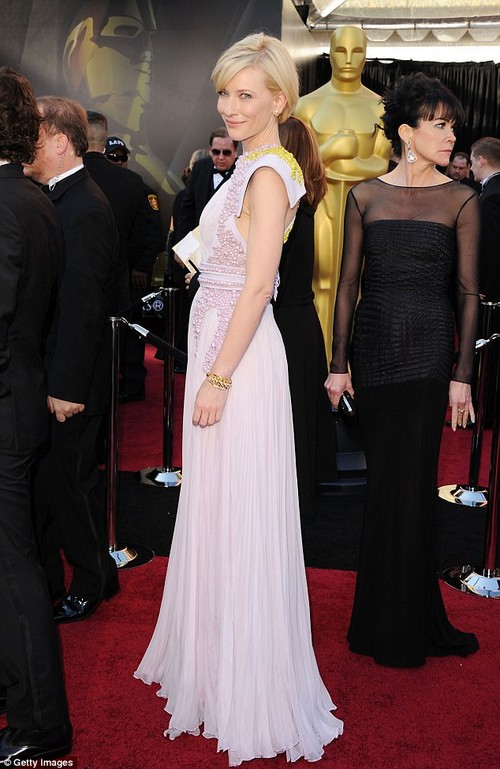 Cate Blanchett, at the 2011 Oscars, has starred in multiple Miramax productions including The Shipping News, Blue Jasmine and The Aviator

Another questioned why Hollywood was not calling for a boycott of the brand, while a Mumsnet discussion questioned how Georgina could stand by her husband in light of the allegations against him.

One commentator insisted that his wife must have known, adding: ‘I think partners are enablers as much as those around him – assistants and the like.’

While Hollywood stars are gradually beginning to denounce Weinstein, with Meryl Sreep, Jennifer Lawrence and Kate Winslet joining the ranks of those condemning the shamed producer, others remain notably silent.

These include UN Women’s Ambassador Nicole Kidman who has worked with Weinstein on seven films and has made countless red carpet appearances in Marchesa. 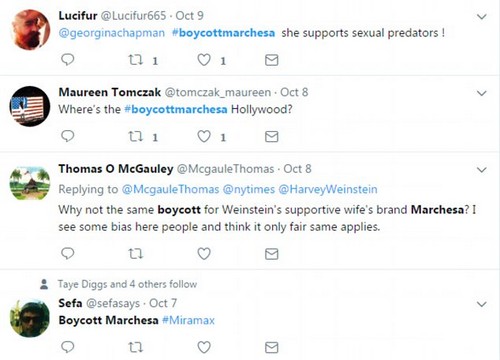 Twitter users have called for a boycott of Marchesa, following the allegations against Weinstein

Jennifer Lawrence who won an Oscar for Weinstein’s 2012 film Silver Linings Playbook, is another fan of the brand as is outspoken feminist campaigner Emma Watson who appeared in the Weinstein film My Week With Marilyn in 2011.

Actress Ashley Judd was one of the first to speak out as she recounted her encounter with Weinstein, saying she was doing night shoots for her 1997 film ‘Kiss the Girls’ when she got an invite to meet with Weinsten that she could not pass up.

She said she felt uncomfortable from the start and ordered cereal from room service because it would arrive quicker than a hot meal. Judd said she was asked to give Weinstein a massage and then a shoulder rub, both of which she declined while trying to get herself out of the room.

WHO IS GEORGINA CHAPMAN?

British born Georgina grew up in the upmarket suburb of Richmond in South West London and attended the prestigious Marlborough College, which also counts the Duchess of Cambridge and Princess Eugenie among its alumni.

After graduating from Wimbledon School of Art she combined a career in costume design with modelling and TV appearances.

In 2004, she launched Marchesa with Keren Craig, a former classmate at Chelsea College of Art and Design.

In the same year she met film producer Weinstein at a party in Manhattan following the breakdown of his first marriage.

They wed three years later with a star-studded guest list including Anna Wintour, Jennifer Lopez, Renée Zellweger and Cameron Diaz and food from Nobu and Cipriani.

The couple share a son Dashiell, four, and a daughter India, seven.

While Georgina has so far remained tight lipped about the scandal, her husband insisted his family was standing by him.

‘I have had tough conversations with my family, really tough ones but my family is standing with me,’ he said. 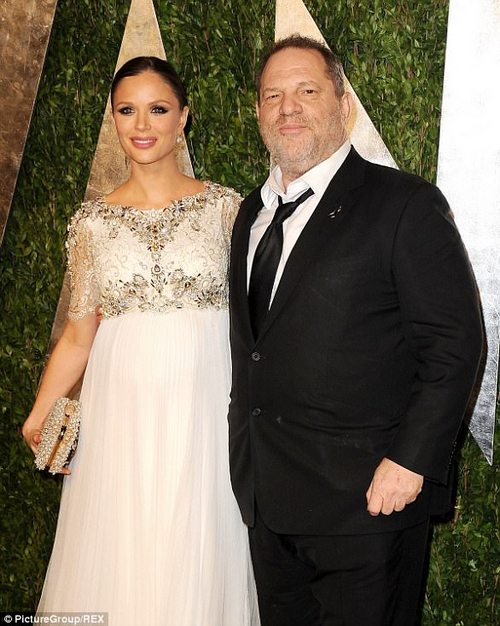 That is when he allegedly asked her to help him pick out his clothes for the day and then watch him shower.

‘I said no, a lot of ways, a lot of times, and he always came back at me with some new ask,’ said Judd.

‘It was all this bargaining, this coercive bargaining.’

She eventually made her escape by joking that Weinstein would have to help her win an Oscar before she would be willing to touch him, stating that the prestige of working for his studio made it too difficult to forcefully shut down his harassment.

‘There’s a lot on the line, the cachet that came with Miramax,’ explained Judd.

Judd previously wrote about the same experience in 2015 for Variety without naming Weinstein, simply saying it was a studio mogul.

‘I was with a bunch of other actors, and it was critical that it was actors: The exact same thing had happened to them by the exact same mogul,’ wrote Judd.

Jennifer Lawrence at the 2012 premiere of The Hunger Games in Berlin, wearing Marchesa. In the same year she won an Oscar for Weinstein’s film Silver Linings Playbook

Renee Zellweger was an early champion of the brand, wearing Marchesa to the premiere of Bridget Jones: The Edge Of Reason in London in 2004, the same year Georgina met Harvey Weinstein

‘Only when we were sitting around talking about it did we realize our experiences were identical. There was a mutual strengthening and fortification of our resolve.’

She later wrote in that piece: ‘The ultimate thing when I was weaseling out of everything else was, ‘Will you watch me take a shower?’ And all the other women, sitting around this table with me, said, ‘Oh my god-that’s what he said to me too.”

Judd was praised for coming out in condemnation of Weinstein while a handful of actors were called out by Charmed and Scream star Rose McGowan.

Weinstein’s accusers: Some of the alleged victims who say the shamed movie mogul of sexually harassed them or other women

Ashley Judd: Judd’s film roles include the thriller Kiss the Girls – and says that during the filming of that movie Weinstein repeatedly asked her to watch him shower. She was one of the women who spoke out to The New York Times this week, saying: ‘Women have been talking about Harvey amongst ourselves for a long time, and it’s simply beyond time to have the conversation publicly.’

Lauren Sivan: The former Fox news host said that Weinstein trapped her in a closed restaurant and masturbated in front of her to completion in 2007. He took her to a closed restaurant beneath a club she had visited and attempted to kiss her, then when she refused he cornered her and made her watch him touch himself, according to The Huffington Post.

One day after Sharon Waxman revealed in a post on The Wrap that she had been working on an expose about Weinstein until Damon and actor Russell Crowe called her directly to try and bury the piece, McGowan lashed out at Matt Damon.

Waxman said in her piece that Damon and Russell Crowe called her after she managed to get multiple sources stating on the record that an Italian man being paid $400,000 by the company knew little about film and was better known for the ‘evenings he organized with Russian escorts.’

The story was ultimately killed despite Waxman’s findings at the time.