George Michael dismissed his life as a ‘waste of time’ and admitted he felt ‘felt picked on by God’ over the trauma of losing his first love to AIDS in heartbreaking scenes from his final documentary.

Freedom – which the star was working on just 48 hours before his death – reveals how the haunted singer never got over the death of Anselmo Feleppa, while completely snubbing Fadi Fawaz, the lover who discovered his body on Christmas Day last year.

The star-studded Channel 4 documentary, which Michael was working on just days before his death, tells the story of his music and battles with fame.

Haunting: George Michael dismissed his life as a ‘waste of time’ and admitted he felt ‘felt picked on by God’ over the trauma of losing his first love to AIDS in heartbreaking scenes from his final documentary

First love: Freedom – which the star was working on just 48 hours before his death – reveals how the haunted singer never got over the death of Anselmo Feleppa (above) , while completely snubbing Fadi Fawaz, the lover who discovered his body on Christmas Day last year

It also reveals the catastrophic effect his boyfriend Anselmo’s death from AIDs had on the star.

Michael was 27 when he saw Brazilian designer Anselmo in the audience of the Rock in Rio concert and asked staff to introduce them.

In a personal interview just three months before his death on Christmas Day, the star recalled: ‘At the front of 160,000 people there was this guy over at the right-hand side of the stage that just fixed me with this look.

‘He caught my attention so much that I had to stop going to that corner of the stage, because I was distracted.

New documentary; Freedom, makes no mention of his boyfriend of seven years Fadi Fawaz (above) and tells the story of his music and battles with fame

‘He was so cute. I was so distracted by him. I stayed away from that corner because otherwise I thought I was going to get really distracted  and forget the words. The moment I looked at him I got the feeling he was going to be a part of my life.’

‘Everything had changed. I was happier than I’d ever been in my life.

‘Anselmo was the first time I think I really loved someone selflessly. It was kind of knee-jerk. I felt immediately that everything had changed.’

‘It’s still very hard for me to explain how finding a companion at that stage in my life changed me. And such a beautiful companion and such an amazing person.’

The singer also said that Anselmo helped him come to terms with his sexuality, saying ‘it’s very hard to be proud of your own sexuality when it hasn’t brought you any joy. Once it’s associated with joy and love it’s easy to be proud of who you are.

‘The first time you actually believe that someone loves you, that’s a wonderful moment in your life and it was a wonderful six months.’

The singer, who was notoriously private about his private life, said he was ‘frightened’ after Anselmo went for a HIV test – knowing the results could mean they both suffered from the infection.

Struggles with fame:George shot to fame as one half of pop supergroup Wham! with Andrew Ridgley

His fear began when Anselmo developed flu which would not go away and was advised to take a test while they were both at George’s LA home.

He said: ‘He went to the doctors over Christmas, it was the most frightening time of my life.

‘I was terrified of losing him. He was my saviour. Finding a companion at that time in my life changed me

‘Then when my mum got cancer, I felt so bloody picked on by God. I took it very badly, very badly indeed. I’ve never felt that kind of depression.’

The star also opened up about the heartbreaking anxiety that began to plague his life after his partner and mother died in the space of five years.

He said: ‘From t
he day I found out about my partner, to the day I can say I was on the mend from my mother, it was just constant fear. It was either fear of death or fear of the next bereavement.’

George said on Christmas Day 1991 he was sat with his family waiting to find out if Anselmo had AIDS. He was in the UK while Anselmo was in Los Angeles.

Calling it ‘the most darkest, most frightening time in my life’ as he sat with dad Jack, mum Lesley and sisters Yioda and Melanie, he said ‘I sat at the Christmas table not knowing whether my partner, who the people around the table did not know about… not knowing whether the man I was in love with was terminally ill’.

Anselmo did not deliver the heartbreaking news until the New Year when he flew to London to break it to George.

In the documentary which shows home movie footage of the couple,  George said: ‘I was absolutely devastated to find out he had a terminal illness… just devastated.

He famously wrote the song Jesus to a Child about Anselmo.

When George performed Queen anthem Somebody To Love in tribute to the star at Wembley Arena, it was doubly painful as his partner Anselmo was in the audience and was sworn to secrecy about his condition.

George said: ‘I went out there knowing I had to honour Freddie Mercury and I had to pray for Anselmo,

‘I just wanted to die inside. I was so overwhelmed by singing the songs of this man I had worshipped as a child, who had passed away in the same manner my first living partner was going to experience.

‘The performance most well-known in my career was sung to my lover who was dying.’

Tragically Anselmo died aged just 33 in March 1993 after he returned to Brazil for a blood transfusion and suffered a brain haemorrhage.

The news was broken to George by a friend who called him in LA.

George said: ‘Then it all goes blurry for a long time. He still, 23 years later, brings a tear to my eye, he was my saviour.’

George’s love life features heavily in the 90 minute documentary, yet his long-term lover Kenny Goss is also omitted from the film. 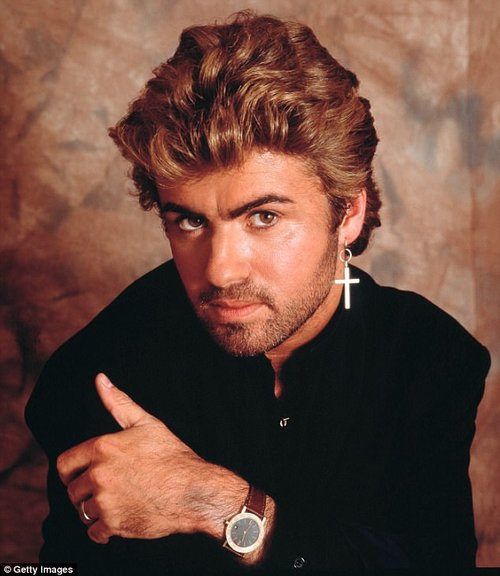 First love: The star-studded Channel 4 documentary, which Michael was working on just days before his death at age 53, tells the story of his music and battles with fame

He says; ‘I hope people think of me as someone who had some kind of integrity. I hope I’m remembered for that, very unlikely.

Tracey Emin say he ‘came out in a big way’ after he was arrested for a lewd act in 1998, referencing his hit song Outside

The singer, who co-directed the film with his manager David Austin, had been in the editing suite working on the film just two days before his death on Christmas Day last year from a heart condition at the age of 53.

He was apparently being found lifeless in bed in his £5 million north London mansion by his boyfriend of three years, hairdresser Fadi Fawaz, 44.

Fawaz has since been accused of demanding a multi-million pound payout from the singer’s estate to ‘keep up with his lavish lifestyle’.

A leaked 999 call made by Fawaz when he discovered the singer’s body revealed he spent an hour trying to wake him before phoning for an ambulance.

In the documentary, the singer also revealed gruelling details of his battle with fame, calling music a ‘controlling lover’.

He admitted: ‘I had a desperate ambition as a child to be famous. But if I was looking for happiness, that was the wrong road. I kind explain how overwhelming that kind of hysteria can be. Suddenly it’s scary. Ten months of that was enough to push me to the edge.’

It also went into detail about his court battle with Sony, which saw him try and free himself from his long-term record contract.

Michael’s lifelong friend and former manager, David Austin, said the singer had come to regret the court case which was launched after he grew frustrated over how 1990 album Listen Without Prejudice had been marketed and accused Sony of ‘professional slavery’.

He said George learned Anselmo was dying during the court battle which he went on to lose in 1994.

Austin said: ‘All these things happened at the same time. Obviously nobody knew, he hadn’t come out at the time. He was on the stand… he hadn’t come out, his boyfriend was dying, he was holding this close to his chest  which was just devastating for him.

Heartbreak: When George performed Queen anthem Somebody To Love in tribute to Freddie Mercury at Wembley Arena, it was doubly painful as his partner Anselmo was in the audience and was sworn to secrecy about his condition

”He says in the film, and when we were talking about the court case and how we were going to handle it, and I didn’t realise this at all, but he turned around to me and said how he regretted it.

‘He wished he’d never taken Sony on in the first place. It dented the armour in his career in America, he was a guy who was firing on all four cylinders and it just, it blew that candle out in the US without a doubt.’

George labelled the whole ordeal ‘a complete waste of time’.

After he was bought out of his contract by Virgin he channelled his grief into 1996 album Older, but heartbreakingly was dealt the devastating blow that his beloved mother Lesley had cancer.

‘I had about a six month period where things were OK and then I found out my mother had cancer,’ he said.

Lesley was told the cancer was terminal in December 1996 and was allowed home to spend her final Christmas with her family. The singer was by her side during her final days at Charing Cross hospital in February 1997.

He said he had hit ‘rock bottom; after his mother’s deaths saying: ‘I was so spiritually crushed after my mum died. So crushed.. For all of my adult life she was phenomenal. Terrible, horrible loss. ‘

‘It was something different to grief. It was on top of grief, I was grieving for my mother still but it was something else. It was the darkest time’.

George was laid to rest next to his mother at Highgate Cemetery.

For 90s fans, another set of famous faces make an appearance in the documentary – the original ‘Supers’ who featured in his 1990 video for Freedom.

There is little mention of the more recent rocky periods in George’s life including his battle with pneumonia in 2011 and how he was airlifted to hospital in 2013 after falling from his Range Rover at 70mph on the M1 or crashing his car into a Snappy Snaps in 2010.

George conducted the candid interview which is the audio for the documentary in an interview with Radio 4’s Kirsty Young who visited his home in Goring-upon-Thames, Oxon to speak with him.

David confirmed, although George did little music in his last two decades, the singer was working on new music before his death, which will be released.

He also said that George was happy saying ‘he was a very happy, contented man’

The documentary will be on Channel 4 next Monday (October 16) at 9pm.

Icon: The documentary will be on Channel 4 next Monday (October 16) at 9pm

Romola Garai is the latest to accuse Weinstein of assault

Trump to issue exec order on healthcare after GOP failure

Mom freaks out when Marine son surprises her in LA