A raging dispute between President Donald Trump and a leading Republican senator has raised fresh concerns in Washington about the ability of the novice politician to claim a major legislative victory his first year in office.

Trump’s spat with Bob Corker threatens to derail a comprehensive tax reform bill that will come to pass only if the administration can muster enough support in the Senate.

The Tennessee Republican is also the head of the Senate Foreign Relations Committee, making him a power player in the legislative debate that will be triggered if Trump makes moves to untangle the United State from the Iran nuclear deal.

Republican insiders are not sweating the battle between the two men.

Corker is a ‘grown up’ who ‘always has worked to be in the room making the sausage,’ Grover Norquist, a top advocate for tax cuts, said. 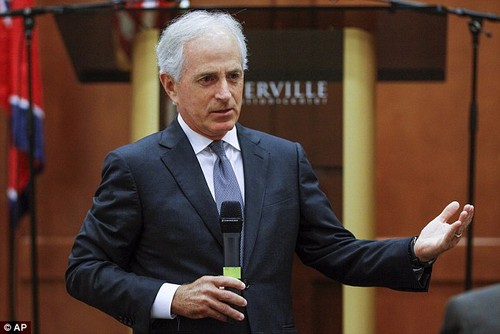 When it comes to Iran, Nile Gardiner, a foreign policy fellow at the Heritage Foundation, told DailyMail.com on Monday morning: ‘I don’t think that this sort of parlor dispute with Bob Corker actually makes any difference to that.’

A close ally of Trump’s, Jason Miller, meanwhile said on CNN that if the retiring senator doesn’t plan to support Trump’s agenda, he ‘should just resign’ and let the state’s Republican governor appoint someone who will, like former Trump transition team member and U.S. Senate candidate Marsha Blackburn, who currently represents Tennessee in Congress.

Trump’s fight with Corker, which exploded on Twitter Sunday, has pitted the president against a key lawmaker from his own party once again.

Belatedly responding to Corker’s statement to press last week that Secretary of Defense James Mattis, Secretary of State Rex Tillerson and White House Chief of Staff John Kelly ‘separate the country from chaos,’ Trump lashed out at the Republican senator on Twitter yesterday.

He claimed Corker did not have the ‘guts to run’ for reelection and ‘begged’ to be secretary of state.

‘I said “NO THANKS,” ‘ Trump contended, adding, that Corker ‘is also largely responsible for the horrendous Iran Deal!’

Corker responded with a stinging rebuke that the White House ‘has become an adult day care center.’ He told the New York Times that the president’s aides are actively working to constrain Trump, who’s recklessness has put the U.S. ‘on the path to WW III.’

‘I’m not sure what kind of message Senator Corker is trying to send by running to the New York Times and throwing out these very crazy comments like World War III,’ Miller, a former aide to Trump, told CNN.

Miller said the interview ‘really cuts against any narrative credibility that Senator Corker has here.’

‘Senator Corker definitely didn’t mind kissing up to President Trump when he wanted to be vice president, when he wanted to be secretary of state. But now, since he didn’t get either of these positions, and now he’s retiring, he seems to just be kind of letting it all hang out there,’ Miller charged.

‘And I think it’s really showing the true colors of the swamp nature of Washington, D.C. that he is criticizing such basic tenets of the Republican platform like tax cuts.’

‘It adds to the insulting that the mainstream media and the president detractor’s almost a year after this election they still can’t accept the election results,’ she said. ‘It adds to their ability and their cover to speak about the President of the United States in ways that no president should be talked about.’

Earlier this year, Corker appeared to question Trump’s mental competency and his overall fitness for office, saying that Trump ‘has not yet been able to demonstrate the stability nor some of the competence that he needs to demonstrate in order to be successful.’

The senator said last week that unless tax reform does not add to the federal deficit, he will not vote for it.

‘I think the greatest threat to our nation is our fiscal issues. It’s not North Korea. It’s not ISIS. It’s ourselves. It’s our inability to deal with this longer-term issue, and every year that goes by it gets worse,’ Corker said.

Norquist, the president of the conservative Americans for Tax Reform, said he believes that Corker will cast a vote in favor of tax reform because ‘he’s never been one of those guys who’s stood outside and screamed.

‘He always has worked to be in the room making the sausage,’ Norquist said.

‘This is not Connecticut or Massachusetts. This is a state with a lot pf people who are regular folks,’ he said of the reliably Republican state. ‘He’s sophisticated. He’s a grown up he’s not perturbed.’

Norquist said, ‘At the end of the day, I don’t think there’s a hair out of place on the senator. He will want a good bill. He has some questions about the bill, he had certain limitations that he wanted. They were met.

‘This bill was pre-organized to meet his concerns, on how much of a tax cut and what it does to the deficit and so on,’ he said. ‘Corker understand economics. Corker knows that this would be tremendously helpful to his constituents, and he’s not an old man. He knows that he could be governor some day.’

Gardiner had a similar take on Iran.

‘And I expect that the R will be largely favorable towards the re-imposition of sanctions, and I expect actually that Corker will as well.’