A groom in Saudi Arabia walked out of his own wedding ceremony after the bride’s father insisted that his daughter be allowed to drive after their marriage.

The bride’s father had demanded that his daughter get a driving license and a car when Saudi Arabia lifts its ban on women driving in June 2018.

The groom, who had agreed to a dowry of 40,000 riyals ($10,666) as well as letting his soon-to-be wife continue working after getting married, was so surprised by the additional demand that he left the ceremony. 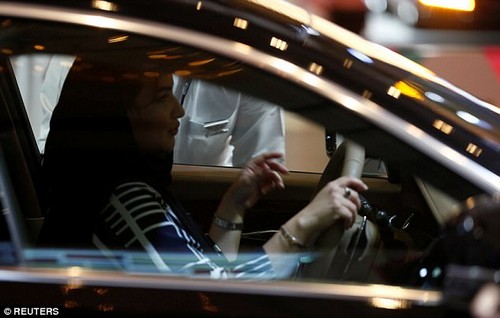 The bride’s father had demanded that his daughter get a driving license and a car when Saudi Arabia lifts its ban on women driving in June 2018 (file photo of a woman in the driver’s seat of a car in a showroom in Riyadh, Saudi Arabia)

The father’s request was made just minutes before the religious wedding ceremony was set to begin, according to Al-Marsd.

The groom quickly rejected the request and walked out of the building, leaving his family behind.

He then asked his cousins to bring dinner to his fiancee’s family, but did not participate in the feast.

Last month, Saudi Arabia lifted its long-criticized ban on women driving. The lift will go into effect in June 2018.

The historic decision to allow women to drive won plaudits internationally and inside the conservative kingdom last month.

King Salman’s decree, which takes effect next June, is part of an ambitious reform push that runs the risk of a backlash from religious hardliners.

Saudi Arabia was the only country in the world to ban women driving, and it was seen globally as a symbol of repression in the Gulf kingdom.

US President Donald Trump welcomed the decision as ‘a positive step toward promoting the rights and opportunities of women in Saudi Arabia’.

King Salman’s (pictured) lift of the driving ban, which takes effect next June, is part of an ambitious reform push that runs the risk of a backlash from religious hardliners

British Prime Minister Theresa May hailed it as an ‘important step towards gender equality’.

Saudi Arabia will use the ‘preparatory period’ until June to expand licensing facilities and develop the infrastructure to accommodate millions of new motorists, state media said.

Conservative clerics in Saudi Arabia, an absolute monarchy ruled according to Islamic sharia law, have long opposed lifting the ban, arguing it would lead to promiscuity.

One of them even claimed that driving harmed women’s ovaries.

The announcement last month follows decades of resistance from female activists, many of whom were jailed for flouting the ban.

Under the country’s guardianship system, a male family member – normally the father, husband or brother – must grant permission for a woman’s study, travel and other activities.

It was unclear whether women would require their guardian’s permission to apply for driving licences.

With more than half the country aged under 25, Crown Prince Mohammed bin Salman, the king’s son and the architect of the reforms, is seen as catering to the aspirations of youths.

Already viewed as the de facto ruler controlling all the major levers of government, Prince Mohammed, 32, is seen as stamping out internal dissent before any formal transfer of power from his 81-year-old father.