Once, I met Harvey Weinstein. Well, I say met; I was interviewing a famous actress (I honestly can’t remember who – they’ve all had so much Botox these days that they blend into one) in the lobby of a Central London hotel when a large man with a sweaty face walked past.

‘Harvey!’ she exclaimed, practically knocking me out in her eagerness to get to him. Lukewarm about having to answer my questions, she now lit up like a 100-watt bulb.

He smiled by way of acknowledgment and encircled the small of her back with a bearish paw, bestowing his blessing upon her. 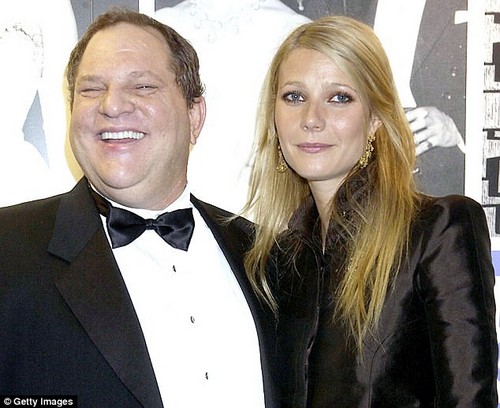 Victim: Gwyneth Paltrow claims she was sexually harassed by Harvey Weinstein (pair above in 2002) at the start of her career

She sat down, flushed with delight. It was clear he was the one with all the power.

Not any more. Weinstein’s former friends and allies have been queuing up to denounce him after revelations of the movie mogul’s 30-year career as Hollywood’s sex-pest-in-chief finally came to light.

His brother has fired him from The Weinstein Company, the film company they founded together, his lawyer wants nothing more to do with him, and his liberal chums (including Bill and Hillary Clinton) suddenly seem otherwise engaged.

Even Meryl Streep, who referred to Weinstein as ‘God’ at the 2012 Golden Globes, has issued a lengthy statement declaring his abuse ‘disgraceful’ and professing herself shocked.

A-listers Angelina Jolie and Gwyneth Paltrow have both revealed that Weinstein had propositioned them in their youth.

And yesterday, The New Yorker magazine dropped a bomb: 13 interviews with women who detailed their encounters with Weinstein.

In one case – that of a Filipina-Italian model named Ambra Battilana Gutierrez – there is even a piece of police audio in which Weinstein tries to persuade the girl to enter his hotel room. 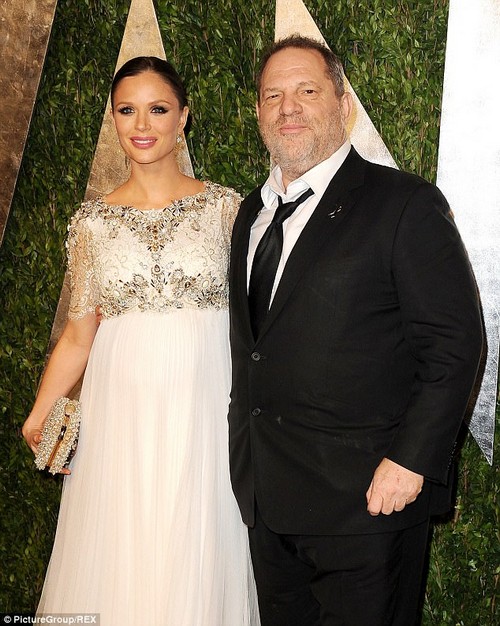 Marriage: Weinstein and his British designer wife Georgina Chapman at the Oscars in 2013

She stands in the corridor, refusing to go in. ‘I’m not gonna do anything,’ he says. ‘I swear on my children.’ Still she refuses.

‘Five minutes,’ he tells her impatiently. ‘Don’t ruin your friendship with me for five minutes.’

Hardly surprising that Hollywood, once at his feet, is now queuing up to put the boot in.

Weinstein’s alleged behaviour has been at best repulsive, at worst criminal. Three of the women in The New Yorker report accuse him of actual rape.

The allegations are denied by Weinstein. His representative issued a statement to The New Yorker saying: ‘Any allegations of non-consensual sex are unequivocally denied by Mr Weinstein.’

Many of the stories show a distinct pattern, of Weinstein asking aspiring actresses to watch him shower or give him ‘massages’ before exposing himself and, if rejected, pleasuring himself in front of them. 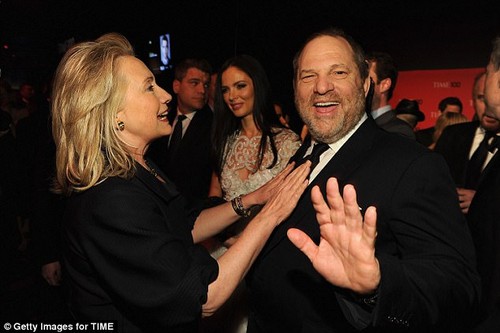 Yet, however vile Weinstein’s actions may be, however many reprehensible acts he may have carried out, however much he deserves to be shunned, what is fast becoming clear is that this whole sordid story reaches far beyond the actions of one man.

Weinstein is merely a symptom – of something even bigger and nastier: Hollywood itself and an entire industry that has for decades thrived on the sexual exploitation of young women by older, uglier and more powerful men.

Weinstein may be the chief perpetrator of these vile acts. But he is by no means the only guilty party.

Countless others are guilty, either by association or because they chose to look the other way. And that is inexcusable. For one thing is becoming more and more apparent: everyone seemed to know.

Not for nothing was ‘You don’t go through Harvey – Harvey goes through you’ the most over-used cliche in town.

Or, as Romola Garai pointed out: ‘You can’t find an actress that doesn’t have that kind of story about Harvey.’

The Oscars this year were all about Trump-shaming, and yet a much worse specimen of sexism was in their midst, lapping up the love. How dare Hollywood lecture the world about morality.

So, let us not forget the sickening hypocrisy of stars and executives, many of whom owe their success to Mr Weinstein and who, until last week, were more than delighted to sing the man’s praises, despite the fact his horrible behaviour was an open secret.

You don’t get to become quite as big a creep as Weinstein without a certain amount of collusion.

And for all the expressions of consternation and solidarity now emanating from Hollywood’s A-list, what is surprising is that the collusion here is as much female as it is male. 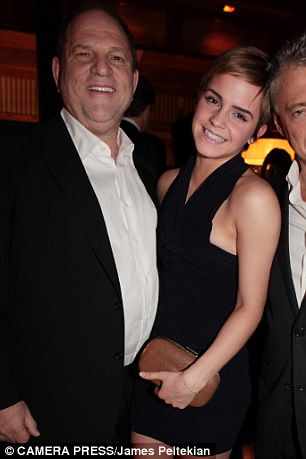 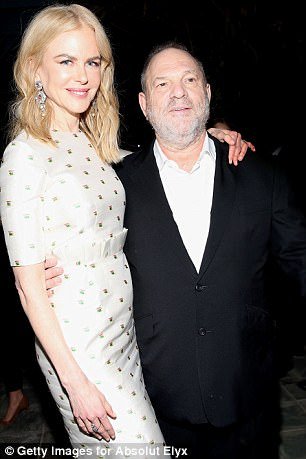 Friends: Emma Watson with Weinstein at a pre-BAFTA dinner in 2011 and right, the movie mogul with Nicole Kidman at a party in LA, last year

This is a real eye-opener. Not so much that a movie producer turns out to have operated a casting couch, repellent as that is; but that if they knew, how so many of Hollywood’s leading women seemed impervious to the plight of their less famous sisters.

All happy to go to his parties, drink his champagne, pose with him on the red carpet, take his money, make his hits.

Then there’s Dame Judi Dench, who once got a fake tattoo of his name on her bottom, but who now condemns his actions as ‘horrifying’ while being careful to point out that she knew nothing about it.

And not forgetting Hillary Clinton: Weinstein was a big Democrat supporter (although, when it comes to justifying sex pests and vilifying their victims, Mrs Clinton, of course, has form).

Where were they when an 18-year-old Garai was ‘violated’ in a hotel suite when Weinstein auditioned her wearing only a dressing gown? Or when Ashley Judd was asked to watch him take a shower? Did he simply not try these things on with them? Or did they consider a little indulgence a price worth paying?

We’ll probably never know. But the fact that Weinstein has been exposed as a lurid sexual predator is as much a reflection on the sleazy culture that condoned his behaviour for the past three decades as it is the man himself.

A culture that condemns a man such as Donald Trump for his out-and-out sexism while all the time seemingly enabling an abuser at the very heart of its own glittering liberal Establishment.

Actress Raquel Welch, 77, said it was challenging being a ‘fading sex symbol’

Curse of being a great beauty

Great beauty can be as much of a curse as a blessing.

As Raquel Welch (right), 77, said herself this week: ‘We can all agree that ageing is challenging, but believe me, it can be even more so for a fading sex symbol.’

She’s right, of course. It’s why the world still idolises the likes of Marilyn Monroe, who died at the height of her sexual powers.

By comparison, Welch is practically a child. It’s as much about attitude as anything else. Not to mention – in some cases, your honour! – the talent of your plastic surgeon.

I wonder if the students at Oxford University’s Balliol College, who stopped the Christian Union from participating in their Freshers’ Fair on the basis that Christianity is ‘an excuse for homophobia and… neo-colonialism’, considered extending their ban to the Islamic Society?

Researchers in Zurich have made what could well be one of the most important scientific breakthroughs in the history of humankind.

They have discovered that women’s brains get a chemical kick out of doing things for others, whereas men’s brains are hardwired to be selfish.

Which probably explains why, when I texted a friend last weekend to see if she was free for coffee, she replied yes – but only after she’d finished off a piece of work as a favour to her boss; taken her eldest to gymnastics; picked up her son’s birthday cake; made 40 rounds of Marmite sandwiches; done the shopping; collected the dry cleaning and cleaned the rabbit hutch.

Her husband, meanwhile, was having a tennis lesson. 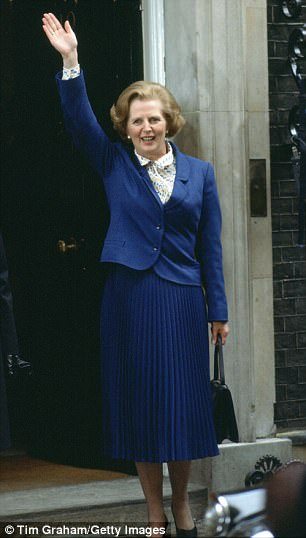 Maggie DID have a flaw!

Like most Tories of his generation, my husband regards Margaret Thatcher with a certain reverence.

But I’m trying to imagine the look on his face if I served him her 1975 recipe for her ‘Mystery Starter’.

Two packets of Philadelphia blended with a tin of beef consomme, spiced up with a pinch of curry powder.

Similar, I should imagine, to the look that greeted my recent suggestion of an omelette for supper: horror, followed by a swift telephone call to our local Turkish takeaway.

I don’t think there’s a better show on TV at the moment than W1A, aka the BBC’s satirical take on itself.

And
just as true-life politics now resembles a rather fanciful episode of The Thick Of It, life at the BBC is even more bizarre than the fevered adventures of Ian Fletcher (played brilliantly by Hugh Bonneville), the beleaguered Head of Values.

To prove it, only one of these stories is untrue. Can you guess which (the answer is at the bottom of the page)?

A) The week before the BBC lost Bake Off to Channel 4, the BBC canteen was redecorated with Bake Off-inspired wall art.

B) When the Jimmy Savile scandal broke, armies of maintenance staff with scrapers had to be drafted in to remove the stickers of his quotes from the glass walls.

C) After the recent revelations about senior pay, all managers at Broadcasting House spent a day wearing their salaries on Post-It notes stuck to their foreheads in the interests of transparency.

Of course, the answer is C.

Why should we have to pay to see a GP?

The NHS is a precious institution. But one of the unintended consequences of having free healthcare for all at the point of delivery is that, over the years, we have begun to take less and less responsibility for our own health.

With the NHS as a safety net, the prevailing attitude among many people is that they can do whatever they want with and to their bodies, and none of it really matters because the dear old NHS will always be there to put Humpty Dumpty back together again.

This attitude explains the sharp rise in so-called lifestyle diseases in the UK.

As the chief executive of the Care Quality Commission, David Behan, pointed out yesterday, we may all be living longer, but that does not necessarily mean that we are living better.

That is why, as well as investing properly in preventative medicine, the Government should have the courage to start charging us to see GPs.

Not only will it remind patients of the immense value of the service, it will also discourage unnecessary visits – and perhaps even encourage them to look after themselves better in the first place.

Romola Garai is the latest to accuse Weinstein of assault