The official police timeline of the Las Vegas killings was thrown into disarray Monday after police revealed that Stephen Paddock fired on a security guard before, not after, he committed mass murder.

Previously, police said hero guard Jesus Campos had distracted Paddock from his rampage – being hit in the process – just a minute before police arrived.

Now it’s been confirmed that Campos was shot six minutes before Paddock began firing on crowds.

That raises questions about what the killer had been planning before Campos disturbed him, and why police did not arrive sooner.

Police have revised the timeline of the Las Vegas shooter, saying that he fired six minutes after firing on a security guard – not 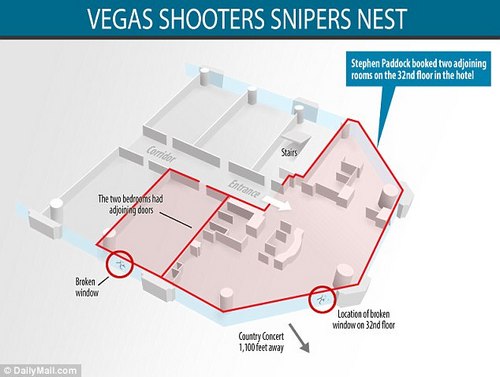 Speaking on Monday, Las Vegas Sheriff Joseph Lombardo said that Jesus Campos had approached the room on the 32nd floor of the Mandalay Bay hotel not because of gunfire, but because of a door alarm that had gone off nearby.

Paddock then apparently saw him on the video cameras he’d rigged up in the hall and opened fire on him. That occurred at 9:59pm.

He then turned his gun on the 22,000 revelers at the Route 91 Harvest country music festival five minutes later, per the original timeline of 10:05pm, Lombardo said.

That contradicts what had been said last Wednesday by Lombardo, who claimed that Campos had approached Paddock while he was firing at around 10:15pm.

Paddock turned his gun on Campos, before stopping firing altogether, he said.

Police arrived just minutes later to a silent hallway, Lombardo claimed – at which point they assumed Paddock was barricaded in and no longer a threat to revelers.

With the hall silent, they – and Campos, who was injured but wanted to help – were free to evacuate the rest of the rooms leading up to Paddock, he said.

That was used as an excuse by Lombardo to explain the delayed response – arguing that even if Campos had not been there, other officers would have disrupted the massacre themselves.

But in the new timeline that excuse no longer works; Campos lay wounded for six minutes before Paddock started firing, police now say.

And Paddock fired for ten minutes on the crowd before stopping abruptly – for reasons that now have police baffled.

Of course, that in turn leaves a 16-minute window in which Paddock