Las Vegas gunman Stephen Paddock is believed to have used the freight elevator at the Mandalay Bay Hotel and Casino in the days ahead of the deadly attack last week.

It is not clear what Paddock used the freight elevator for or how often he used it.

According to CBS News, authorities are continuing to look at Paddock’s electronic devices – including a laptop and a cellphone – at an FBI crime lab in Quantico, Virginia.

It’s also been revealed that Paddock fired special ‘incendiary’ bullets – meant to ignite when they hit – at a jet fuel tank, hoping to created an explosion, according to CNN.

Authorities had previously disclosed that he fired at the tank and struck it with two rifle rounds, but failed to penetrate it. 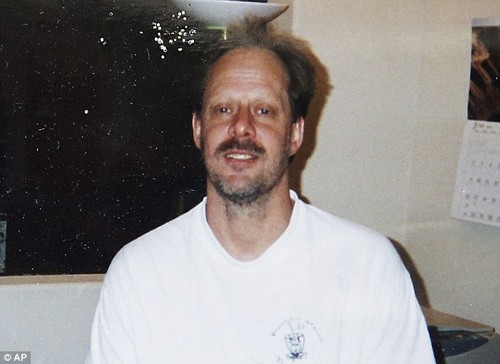 During a news conference on Monday, authorities updated the timeline of the mass shooting, saying Paddock shot a hotel security guard before he opened fire on concert-goers.

Las Vegas Sheriff Joe Lombardo previously had said the guard was shot after Paddock had fired on the Route 91 Harvest Festival from his 32nd floor suite and the guard’s arrival in the hallway outside could have caused Paddock to stop shooting.

Security guard Jesus Campos was in the hallway responding to a report of an open door when he heard drilling from Paddock’s room.

Paddock saw Campos on three cameras he had installed to monitor the entrance to his suite and sprayed 200 shots into the hall. Campos, miraculously, was only wounded and alerted other security officials.

Six minutes later, Paddock began raining down bullets for approximately 10 minutes in the attack that killed 58 people and injured 489 – making it the deadliest mass shooting in modern US history.

On Monday, police revealed that Paddock shot at security guard Jesus Campos at the Mandalay Bay Hotel (pictured) six minutes before firing on the crowd of 22,000 on October 1

Additionally, the 64-year-old had been attempting to drill a hole in an adjacent wall, potentially to mount another camera or to point a rifle through, but it was never completed, Lombardo said.

Lombardo expressed frustration with the pace of the investigation to pinpoint the motive behind Paddock’s motive to fire on the crowd of 22,000 on October 1.

‘It’s because this individual purposely hid his actions leading up to this event, and it is difficult for us to find the answers to those actions,’ Lombardo said. ‘We believe he decided to take the lives he did and he had a very purposeful plan that he carried out.’

There is still no evidence that Paddock was motivated by ideology, or that there was another shooter.

Johnny Depp says he would ‘take a bullet’ for Gerry Conlon