The man in question was chiming in during a discussion about the recent charges against Harvey Weinstein, when he expressed doubt that women might be afraid of being taken seriously when they report abuse.

Hundreds of thousands of Twitter users are facepalming after reading one man’s oblivious tweet about sexual assault.

In doing so, he seemed to unintentionally prove the very point that he was arguing against. 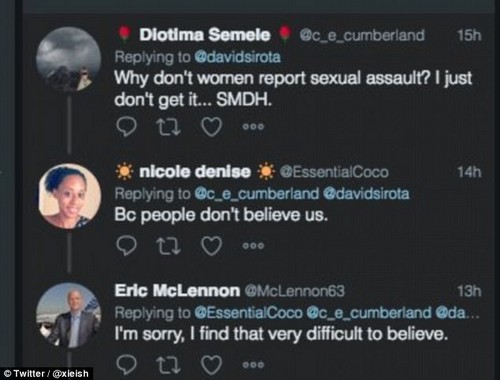 See the irony here? A man named Eric McLennon is being called out after telling a woman he didn’t ‘believe’ that assault victims are afraid people won’t believe them

Viral: Mike Boossina shared a screengrab of the exchange, earning over 320,000 likes 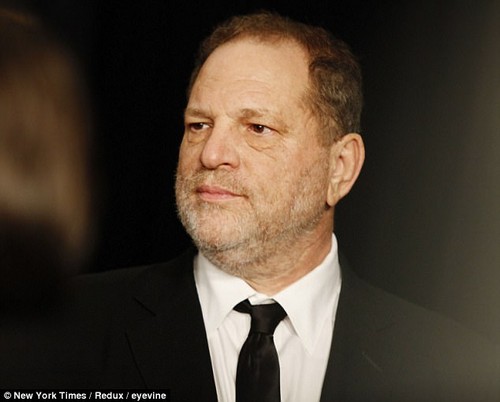 Context: The comments were made in reply to an article about the recent accusations against Harvey Weinstein

The Twitter exchange occurred in response to an article about Harvey Weinstein, who last week was accused by multiple women of ‘sexual harassment and unwanted physical contact’, according to the New York Times.

Replying to the link, a woman who goes by Diotima Semele wrote: ‘Why don’t women report sexual assault? I just don’t get it… SMDH.’

She seemed to be referencing that several of the accusers in the article did not go to police following the incidents of alleged harassment.

Another woman, who goes by Nicole Denise, replied simply: ‘Because people don’t believe us.’

While Nicole seemed to be expressing that women might be afraid to report assault because they’ll be doubted and possibly maligned, her words took on a greater meaning after one man replied.

Can’t hide: Nearly a thousand people have replied so far, calling out the man’s ‘awfulness’

Seriously: Many couldn’t believe that the man didn’t notice he was proving the woman’s point

Slow: He didn’t notice that he was demonstrating the very issue he argued didn’t exist

Not too bright: Several laughed at the man’s lack of self-awareness while others were just dismayed

Seemingly oblivious to the irony of his words, Eric made no attempt to defend his tweet – even when others called him out.

‘You literally just proved her point,’ wrote one woman.

Soon after, another Twitter user named Mike Boossina screengrabbed the exchange – and made it go viral. Mike voiced his bewilderment at how un-self-aware the other man was, telling a woman he didn’t ‘believe’ that she had trouble being ‘believed’.

Other people were astonished, too, leaving nearly a thousand comments.

‘My God. Without a hint of irony,’ wrote one. ‘It would b funny if it weren’t so tragic,’ added another. ‘Case in point,’ said a third.

‘Reasons people may not report sexual assault – it’s traumatizing, humiliating, a lack of evidence, wanting to forget it, fear of judgement,’ someone tweeted.

Big proplem: Several women pointed out other reasons that assault victims, both male and female, so often keep quite 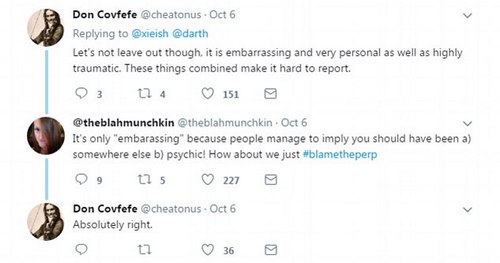 Disheartening: Only 36% of rapes, 34% of attempted rapes, and 26% of sexual assaults are reported to the police

Sad: Reasons include guilt, shame, fear of not being believed, and fear of retaliation

‘Let’s not leave out though, it is embarrassing and very personal, as well as highly traumatic. These things combined make it hard to report,’ wrote another woman.

‘It’s only “embarrassing” because people manage to imply you should have been a) somewhere else b) psychic! How about we just #blametheperp,’ added one more.

According to the US Bureau of Justice Statistics, only 36 per cent of rapes, 34 per cent of attempted rapes, and 26 per cent of sexual assaults are reported to the police.

The US National Institute of Justice says that the most commonly reported reasons for not reporting are self-blame and guilt, shame or a desire to keep the matter private, fear of other people’s perceptions, lack of trust in the criminal justice system, and ‘fear of not being believed or of being accused of playing a role in the crime’.