First lady Melania Trump has hit out at Ivana Trump, after her husband’s ex called herself the ‘first lady’ in an interview to promote her new memoir.

Speaking to Good Morning America on Monday, Ivana, the president’s first wife, said she is on good terms with her ex and that they speak about once every two weeks.

She said she even has a direct number to the White House, but doesn’t use it because she doesn’t want to cause any issues between the president and Melania.

‘Melania is there and I don’t want to cause any kind of jealousy or anything like that because I’m the first Trump wife. I’m the first lady, ok?’ she said.

The first lady was clearly infuriated by the comment, since she quickly issues a statement through her spokesman, calling Ivana an ‘attention seeker’. 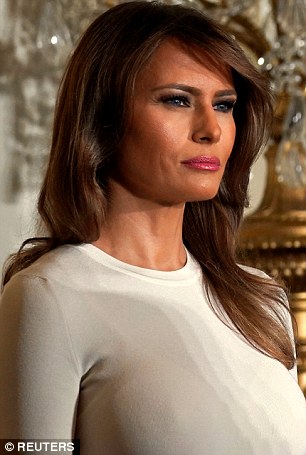 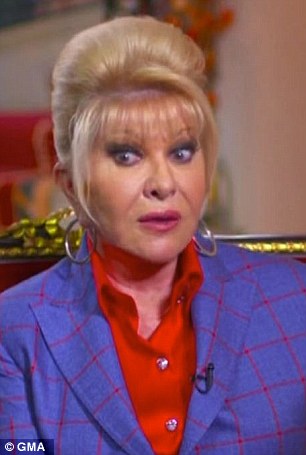 Melania Trump (left) called out her husband’s first wife in an official statement on Monday, after Ivana Trump called herself the ‘first lady’ in an interview on Good Morning America Monday morning (right) 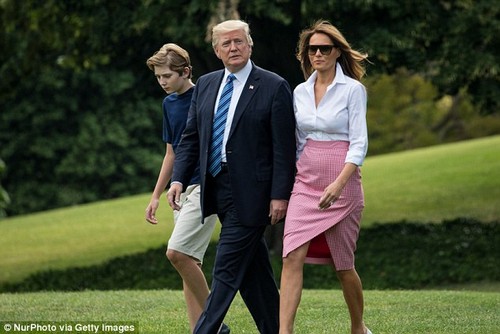 ‘There is clearly no substance to this statement from an ex. Unfortunately only attention seeking and self-serving noise,’ the first lady’s spokesman said in a statement. Melania pictured above with the President and their son Barron back in June

‘Mrs. Trump has made the White House a home for Barron and The President. She loves living in Washington, DC and is honored by her role as First Lady of the United States. She plans to use her title and role to help children, not sell books.

‘There is clearly no substance to this statement from an ex. Unfortunately only attention seeking and self-serving noise,’ the statement from spokesman Stephanie Grisham reads.

Melania’s statement sent the internet into a frenzy, with many entertained by the idea of public fued within the Trump family.

Andy Cohen, who produces the Real Housewives shows for Bravo,  tweeted that ‘even I AM SPEECHLESS’.

‘This is actually happening. All the wives are fighting,’ he said. 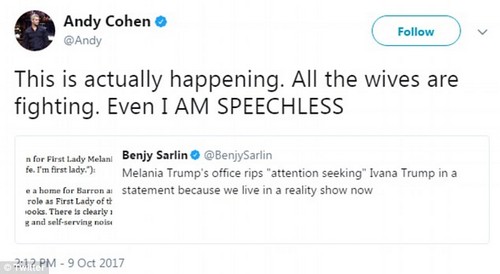 Andy Cohen, producer of the Real Housewives franchises, was one of the many reacting to the fued online

In the candid GMA interview, Ivana spoke out about her ex-husband, his presidency and their three children.

Ivana says she has given her ex-husband advice on occasion, but she understands why he likes to tweet so much.

‘Sometimes I tell him to just not to speak that much, ok?’ Ivana said, laughing. ‘And tweets are the tweets and I think I don’t disagree with him because he has so much press against him so if he say something his words are going to be twisted immediately. If he tweets the whole world can really get his mind and he can tell it in his own words.’

When it comes to her own children taking after their father and ganging up on specific people on Twitter, Ivana said they are justified.

However, Ivana said she’s not so sure about the president’s policy on immigrants, being an immigrant herself.

She said she understands the need to build a wall ‘because you have to protect your borders’ but she says she doesn’t know if ending DACA is such a good idea.

Donald has absolutely nothing to do with Russia…He was running against Hillary Clinton and America voted and he won and that’s the end of it.

‘I would not send away probably thousands and thousands of the kids that were born here,’ she said. ‘But it is very political and confusing so I really don’t have an answer on that.’

Another issue that she backs her ex on is over the accusations that he was working with Russia to win the election.

‘Donald has absolutely nothing to do with Russia,’ Ivana said.

‘He was running against Hillary Clinton and America voted and he won and that’s the end of it,’ she added.

A center point of the investigation has been on Trump’s eldest son Donald Jr and his alleged decision to meet with a Russian lobbyist to get information on the Clinton campaign.

Ivana says she knows her son was not involved in any wrongdoing.

‘I have zero concerns because I know he didn’t do anything wrong,’ she said.

The 68-year-old Czech Republic native (left) blamed the end of her marriage on ‘showgirl’ Marla Maples, who Trump cheated on her with and eventually married as his second wife (Maples and Trump pictured on the right) 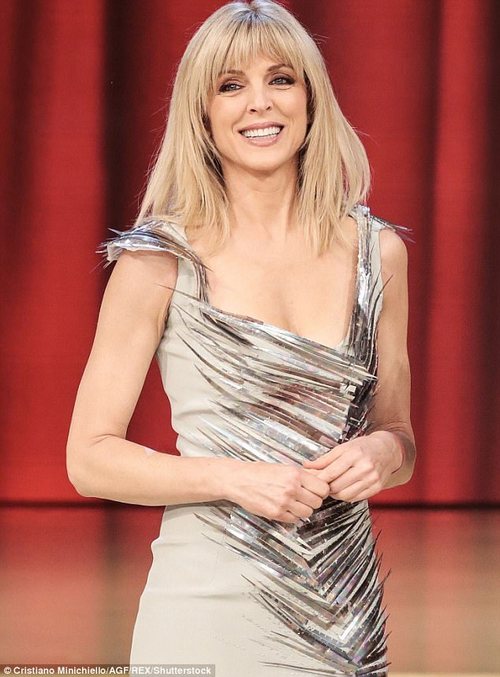 Trump was married to Maples (pictured this year, appearing on Italy’s Dancing with the Stars) for six years. They have one daughter, Tiffany

When asked if the president surrounds himself with people who who call him out when he’s wrong, Ivana said ‘absolutely’.

‘Ivanka is number one. All my kids, they’re not afraid of him. A lot of people, they’re afraid to criticize him but my kids tell him exactly how they feel about you – take it or leave it. And sometimes he takes it and sometimes he leaves it. But he listens,’ she said.

In the book, she takes responsibility for shaping the three children she had with the president – Donald Jr, Ivanka and Eric.

‘Donald was on the phone making deals. He was a loving father, don’t get me wrong. And a provider. But he was not a father which would take a stroller and go to Central Park or go play baseball with them,’ Ivana said on Monday.

‘It was only until they were about 18 years old that he could communicate with them because he could start to talk business with them. Before he didn’t know what conversation to speak with the little kids.’ 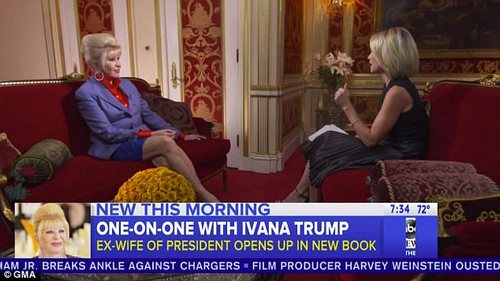 One issue that Ivana refused to talk about was Marla Maples, Trump’s second wife whose affair with The Donald brought his first marriage to an end.

Ivana refused to call Maples by her name, instead referring to her as the ‘showgirl’.

She said that Trump and Maples’ affair was the last straw for her marriage, since the trust in the relationship was broken.

But since their divorce was finalized, she says she and her ex have been able to start a friendship that continues to this day.

‘Donald during the divorce was brutal. He took the divorce as a business deal and he cannot lose. He has to win. So it took about two years and after the final situation was straightened up, he was just talk and we are friends,’ Ivana said.

Ivana also talked about Maples in a Sunday interview with CBS.

‘I don’t talk about her. She’s a showgirl. Never achieve anything in her life,’ Trump said of Maples, who stared in The Will Rogers Follies on Broadway in 1991.

She then implied that Maples gets the blame for her marriage ending.

When asked if she blames Donald now for their marriage ending, Trump replied: ‘I’m not sure, because Donald would get 1,000 business cards in the pocket every night. He could choose any girl he wanted to have.

The photos that will mess with your mind!