It was a moment eight months in the making: Melania Trump bounding down the White House lawn to the vegetable garden made famous by her predecessor.

Clad in a red plaid shirt, her eyes obscured by dark sunglasses, she greeted members of the local Boys and Girls Club who came to help her harvest and plant new crops.

One skeptically asked, ‘Are you Melania Trump?’

Melania Trump, 47, is becoming more comfortable in her role as First Lady of the United States 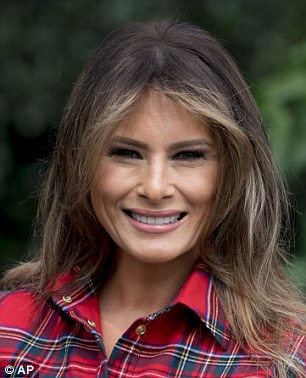 She says ‘my platform’ a lot more, too.

As Mrs. Trump becomes more comfortable with her new role, she is speaking out about how she envisions using that platform to help children.

She is going beyond cyber bullying, which she had identified during the presidential campaign as an issue that she would tackle if her husband became president. 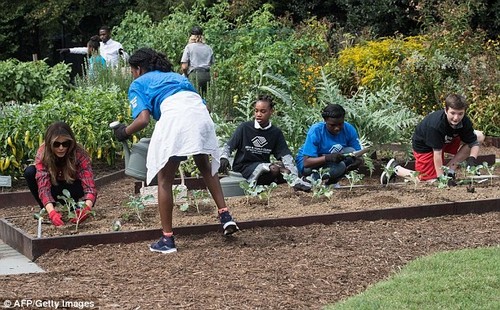 Melania Trump is pictured working in the White House kitchen, developed by previous First Lady Michelle Obama, with children from the Boys and Girls Club of Greater Washington. Her flannel shirt from high-end label Balmain cost $1,380 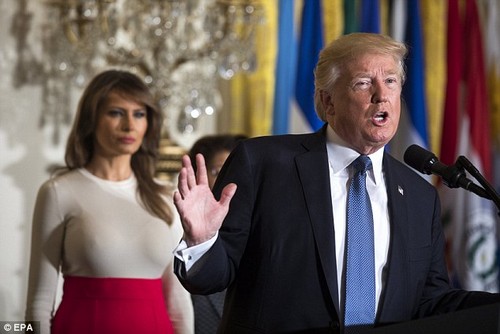 Melania stands in the background as her husband, US President Donald Trump, speaks at a Hispanic Heritage Month event on October 6 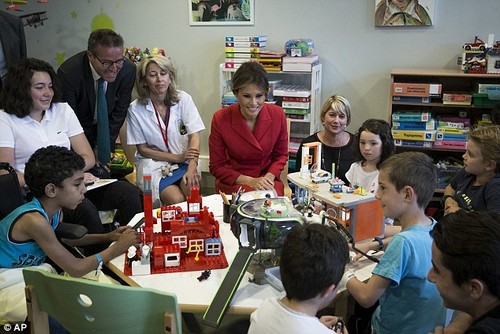 Melania Trump talks to children while visiting the Necker hospital, France’s biggest pediatric hospital, which is in Paris this past July 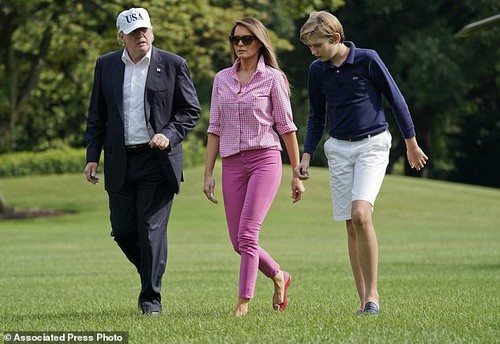 Trump walks with her husband, President Donald Trump, and their 11-year-old son, Barron, on the South Lawn of the White House after returning from a weekend at Camp David this past August

In a flurry of solo public appearances from the United Nations to an international sports event in Canada to the White House in the past few weeks, Mrs. Trump has provided new clues about her plans in a role that has thrust her into a spotlight far different from the bright lights she grew accustomed to during her career as a fashion model.

She called on attendees at a U.N. luncheon last month to set good examples for children.

She invited experts and people affected by drug addiction and opioid abuse, including a recovered addict, to the White House for a listening session and told them she plans to ‘use my platform as first lady’ to help as many kids as possible.

During a visit to storm-ravaged Puerto Rico with her husband, Mrs. Trump told Puerto Rico’s non-voting representative in Congress that she was ‘passionate’ about trying to help more communities on the island and asked how she might be able to do that, according to Representative Jenniffer González-Colón.

The first lady also took her first solo trip – to Canada – to cheer Americans participating in an athletic competition for wounded service members and veterans. 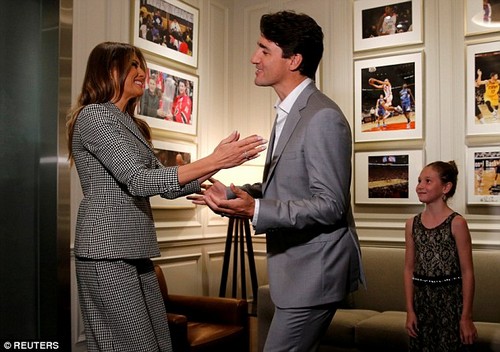 Melania Trump and Justin Trudeau greet each other as Trudeau’s daughter, Ella-Grace, looks on. Trump made her first solo trip to Canada to attend the opening ceremony of the Invictus Games in Toronto this past September 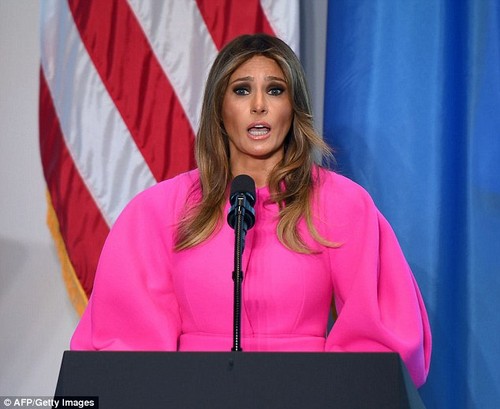 Melania addressed the spouses of various world leaders at a United Nations luncheon this past September. She discussed the issue of vulnerable children around the world. She wore a pink neon wool coat Delpozo that cost $2,950

And, on that sunny afternoon in the garden that was the brainchild of former first lady Michelle Obama, she encouraged the children helping her to make healthy eating a priority.

‘I’m a big believer in healthy eating because it reflects on your mind and your body,’ she said before telling the group to ‘come with me and have some fun’.

She later pulled leeks from the ground and clipped an artichoke from a nearby plant.

‘I encourage you to continue and eat a lot of vegetables and fruits so you grow up healthy and take care of yourself… It’s very important.’

Mrs. Trump is a unique first lady: a native of Slovenia and former fashion model fluent in several languages. But like her predecessors, she’s still going through an adjustment period.

She was rarely seen in the weeks after the inauguration, and was usually at Trump’s side when she did appear in public.

In an unusual move for modern first ladies, she and Barron, the couple’s now-11-year-old son, lived at the family’s Trump Tower penthouse in New York for several months after the inauguration so he wouldn’t have to switch schools in the middle of the year.

They joined Trump at the White House in June, and Barron started sixth grade at a private school in Maryland after Labor Day. 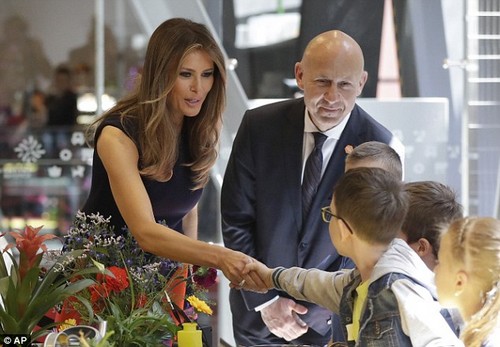 Melania Trump shakes hands with a young boy during a visit at the Copernicus Science Center, an interactive science museum in Warsaw, Poland this past July

Melania Trump and Brigitte Macron, the wife of French President Emmanuel Macron, wave after a boat trip down the River Seine in Paris this July

‘I still have a feeling she looks at this and says, ‘Am I really in this position?” said Myra Gutin, a professor at Rider University who writes about first ladies.

Others attribute the first lady’s more visible, though still low, profile to her satisfaction that her only child is OK after the big move.

‘The more comfortable she becomes in the position, the more great work she’s going to be able to do,’ said Sam Nunberg, a former Trump campaign aide.

Melania is the most popular Trump in the White House, according to a recent CNN survey in which 44 percent of those polled said they have a favorable opinion of the first lady.

It’s typical for first ladies to be more popular than their husbands, who are called upon to sound off on a host of difficult issues.

Christopher Ruddy, CEO of the Newsmax website and one of the president’s longtime friends, said he thinks the American people respect the fact that the first lady put her son’s needs first.

‘She wasn’t just going to rush down to Washington because her husband was elected,’ Ruddy said. 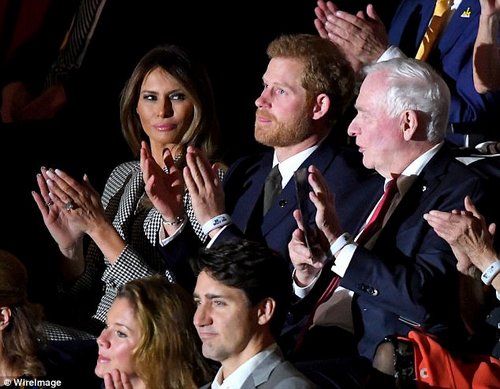 Melania claps at the Invictus Games in Toronot along with Justin Trudeau (below her), his wife Sophie Gregorie (to his left) and the English Prince Harry (to Melania’s right)

Melania, Barron and Donald are pictured on January 20, the day he was inaugurated as the 45th President of the United States.

Donald is pictured taking the oath of office. His left hand is on a bible held by Melania. Barron looks off into the distance. In the background Paul Ryan and Mitch McConnell can be seen

Even Trump, who has experienced some of the lowest public approval ratings of a first-year president, has called attention to his wife’s popularity.

‘She’s become very, very popular, I’ll tell you that,’ Trump said after she introduced him at a recent event at Joint Base Andrews in Maryland.

He said she has become an ‘incredible emissary’ for the American people. ‘Very proud of her.’

But the higher profile brings sharper scrutiny, too.

On Trump’s first trip to Texas after the hurricane, the first lady’s decision to wear stilettos as she left the White House was panned on social media.

Many criticized her footwear as inappropriate for the circumstances, leading Mrs. Trump’s spokeswoman, Stephanie Grisham, to lament the focus on shoes during a natural disaster.

Mrs. Trump changed into sneakers for the arrival of Air Force One in Corpus Christi. 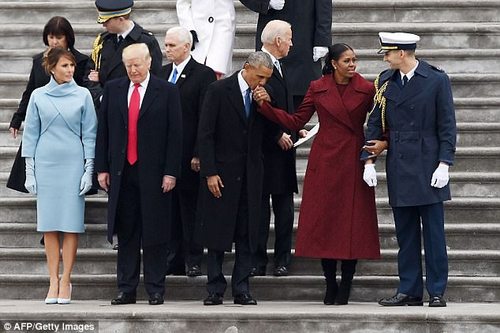 Barack Obama and Michelle Obama share an affectionate moment while Donald Trump looks to the ground and Melania Trump looks at the display of affection inauguration festivities on January 20. Behind the Trumps are Mike and Karen Pence 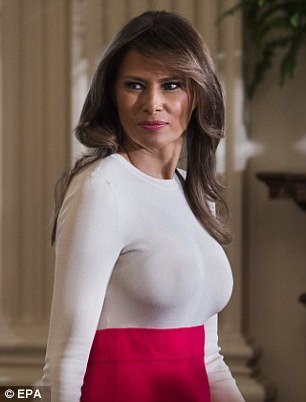 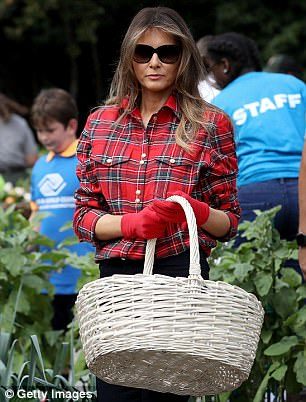 ‘I still have a feeling she looks at this and says, ‘Am I really in this position?” said Myra Gutin, a professor at Rider University who writes about first ladies

And after the first lady marked National Read a Book Day in September by donating Dr. Seuss titles to a public school in each state, a librarian at an elementary school in Cambridge, Massachusetts, refused to accept them. The librarian cited Trump’s education policies and images in the books in her refusal.

As she gets more comfortable, the first lady is putting her own stamp on the role.

She frequently appears in the Oval Office with Trump, and almost always with the spouse of a visiting foreign leader, as she did last Monday when Thailand’s prime minister visited the White House.

She joined Trump for briefings on the hurricanes and the opioid crisis, and accompanied him each time he went to survey storm damage, including the recent trip to Puerto Rico.

Passenger dies during 14-hour flight from Manila to LA