Monica Lewinsky wants people to think long and hard about the fact that cruel, racist, and bigoted comments are so commonplace on the internet when they’re not tolerated in real life.

Lewinsky, 44, has become a vocal advocate for the anti-bullying movement in recent years, and recently teamed up with the ad agency BBDO New York to create a PSA for the cause.

In the two-minute video, which debuted on YouTube on Monday, online bullying is taken offline to highlight just how big of a problem it is.

Called ‘In Real Life’, the PSA features several scenes in which people are filmed slinging hurtful and bigoted insults at others around New York City.

In one, a stranger approaches a gay couple sitting and eating at a restaurant to berate them.

‘I think gay people are sick, and you guys should just kill yourselves. Just end your miserable existence,’ he says. ‘Homosexuality is a disease. You’re saving humanity by killing yourselves.’

In another scene at the same restaurant, one woman approaches another at a table to insult her weight.

‘Fat b****es like you should get over themselves and go on a diet,’ she tells her. ‘I’m traumatized. Get a gym membership. I f***ing hate fat people.’ 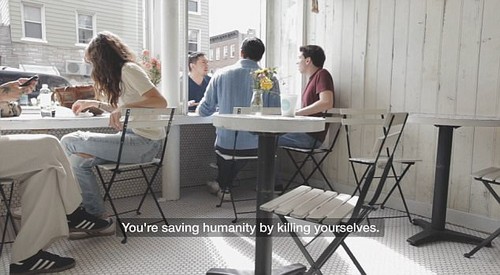 Teamwork: She made the PSA with ad agency BBDO New York 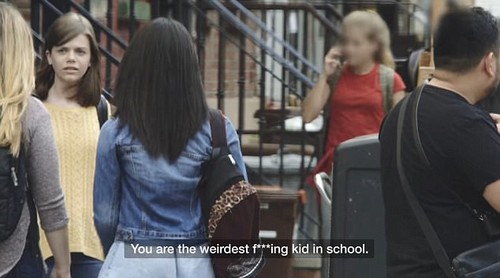 Cruel: In it, people are filmed slinging insults – at times racist and bigoted – while out in New York 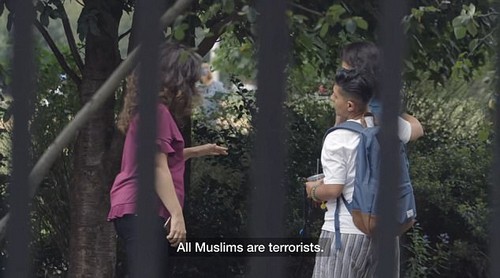 Truth: Though the bullies and victims are actors, their words were lifted from social media

In a park, a woman yells at another woman who appears to possibly be of Middle Eastern descent and is simply texting on her phone.

‘All of you Muslims need to go back to the hellholes you’re from,’ she says.

A final scene shows a group of three teenage girls on a sidewalk. Two have teamed up to belittle and insult the third girl.

‘She’s so stupid, you’re so stupid,’ they say. ‘You know you’re stupid? You’re the weirdest f***ing kid in school. Everyone hates you. You should hate yourself, too.’

In each of the instances, the injured party is minding his or her own business and seems to be hurt and surprised by the attack. Two women even tear up.

And luckily, in each case, a bystander steps into put an end to it: A large, muscular man grabs the person attacking the gay couple and tells him to get lost, a young woman steps in to defend the bullied teen and tell her attackers they should leave, and passerby in the park offers a hug to the Middle Eastern woman. 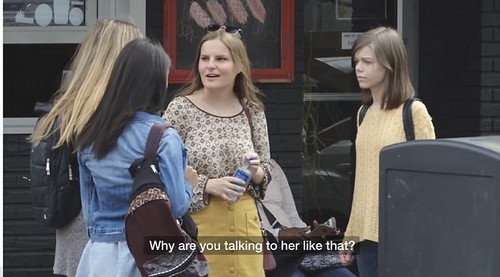 Find your compassion: In each scene, real New Yorkers – not actors – stepped in to help 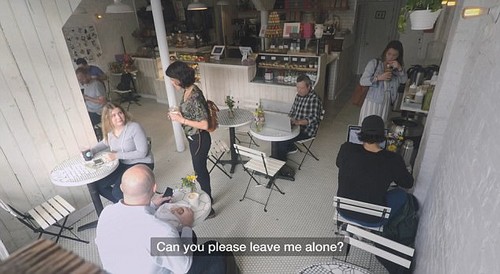 Seriously, though: The video asks why this kind of behavior is ‘normal’ online when it is not tolerated in real life

As it turns out, all of the bullies and their victims were actors – but their words were very really, lifted directly from social media. (The people who stepped in were not actors).

The video asks: ‘If this behavior is unacceptable in real life, why is it so normal online?’

Lewinsky has plenty of first-hand experience with the disparity between what people will say to your face and what they will say behind the veil of internet anonymity.

‘I think that there are are probably hundreds of thousands, if not millions of horrible things, which have been said about me online and in print,’ she told People. ‘But I can count on one, maybe two hands, how many times people have been rude to my face.

‘When you are with someone, when you see someone face to face, you are reminded of their humanity.’ 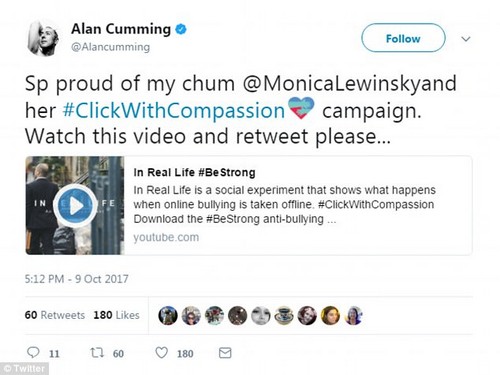 Brava! Andy Cohen has also showed his support on Twitter

The video is part of Lewinsky’s #ClickWithCompassion campaign

Speaking out: Lewinsky has been a vocal anti-bullying advocate for about three years now

She herself has had to repeatedly remind people she is, in fact, a person – and jokes made at her expense hurt.

Two weeks ago, a D.C. lawyer named Aaron Worthing joked on Twitter that ‘@MonicaLewinsky was the first person to #TakeTheKnee’. What’s more, he had the audacity to tag her in it, seeming to hope she’d see it.

But Lewinsky’s stance on bullying seems to be working, as several other Twitter users came ot her defense. She later thanked them.

Lewinsky re-emerged into the spotlight in 2014, over a decade and a half after becoming a punchline and the center of President Clinton’s sex scandal.

There are people out there: She said that with the internet, we risk ‘forgetting that other people are beyond the screen’

Not lying low anymore: Last month, she called out a man who made a joke at her expense and thanked people who stuck up for her

She started her personal campaign against bullying with a Vanity Fair piece that year, candidly discussing the fact that she was ‘possibly the first person whose global humiliation was driven by the Internet’.

‘I was Patient Zero of losing a personal reputation on a global scale almost instantaneously,’ she said in her speech, adding that society is experiencing a ‘compassion deficit’ and ’empathy crisis’ online.

Since the PSA has hit YouTube, several celebrities including Katie Couric and J.K. Rowling have shared it and offered support, while Monica is speaking out even more.

‘The internet is an incredible tool that has allowed for unprecedented connection and the instant sharing of ideas,’ she told AdWeek. ‘But in occ
upying a disembodied, digital space, we also risk losing our humanity and forgetting that other people are beyond the screen.

‘This campaign is a wakeup call to remind people that our instincts for empathy and caring are still strong. We just need to consciously extend that thinking online.’