North Korea possesses a nuclear missile that would be capable of reaching U.S. territory ‘after modernisation’, a Russian MP has claimed.

Pyongyang has told Moscow lawmakers that its current ballistic missile, with a range of 1,865miles (3,000kilometres), will be able to reach the US West Coast following some updates, a Russian news agency reports.

Anton Morozov, who just returned from a visit to Pyongyang, has said North Korea is preparing to launch another missile ‘in the nearest future’, and that it aims to increase the range of its rockets to 5,593miles (9,000kilometres). 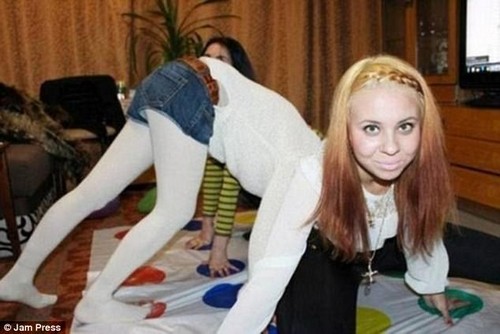 Bold claims: Pyongyang has told visiting Russian politicians that its current ballistic missile, with a range of 1,865miles, will be able to reach the US West Coast ‘after modernisation’

Wide reach: North Korea is currently working on increasing the range of its rockets to 5,592miles which could see it reach several cities on the US coast and Canada – the red line appears uneven due to the map being flattened out

Seattle is located some 5,134miles from Pyongyang, and London 5,379miles. If North Korea achieved this target, both the US and the UK is well within range.

However, ‘There was no talk about the deadline (for solving this task),’ Morozov said.

Morozov, of Russia’s nationalist Liberal-Democratic Party, added that he has seen calculations showing the missile can hit the US West Coast.

Mr Morozov also said the North Koreans told him they have technology that would allow them to bring a warhead back down to earth intact.

The Party Foundation Anniversary, in which North Koreans celebrate the founding of their ruling communist party, is due to take place today.

Anton Morozov claimed to have seen calculations showing the missile can range the US West Coast and that North Korea can bring a nuclear warhead back to earth intact (pictured, Kim Jong Un inspects what purports to be a hydrogen bomb)

This follows allegations by South Korea that North Korean computer hackers have stolen hundreds of classified military documents from Seoul, including detailed wartime operational plans involving its US ally.

Rhee Cheol-Hee, a lawmaker for the ruling Democratic party, said the hackers had broken into the South’s military network last September and gained access to 235 gigabytes of sensitive data, the Chosun Ilbo daily reported.

Among the leaked documents was Operational Plans 5015 for use in case of war with the North and including procedures for ‘decapitation’ attacks on leader Kim Jong-Un, the paper quoted Rhee as saying.

Rhee, a member of parliament’s defence committee, could not be reached for comment but his office said he had been quoted correctly.

The report comes amid heightened fears of conflict on the Korean peninsula, fuelled by US President Donald Trump’s continued threats of military action against Pyongyang to tame its weapons ambitions.

In his latest tweet over the weekend, Trump reiterated that diplomatic efforts with North Korea have consistently failed, adding that ‘only one thing will work’.

Citing Seoul’s defence ministry, Rhee said that 80 percent of the leaked documents had yet to be identified.

But the contingency plan for the South’s special forces was stolen, he said, as well as details about annual joint military drills with the US and information on key military facilities and power plants.

In May the ministry said North Korea had hacked into Seoul’s military intranet but did not say what had been leaked.

Pyongyang has a 6,800-strong unit of trained cyber-warfare specialists, according to the South Korean government. It has been accused of launching high-profile cyber-attacks including the 2014 hacking of Sony Pictures.

Fuel to the fire: Donald Trump discussed North Korea with his generals on Thursday before tweeting over the weekend that diplomatic efforts have failed, and ‘only one thing will work’ 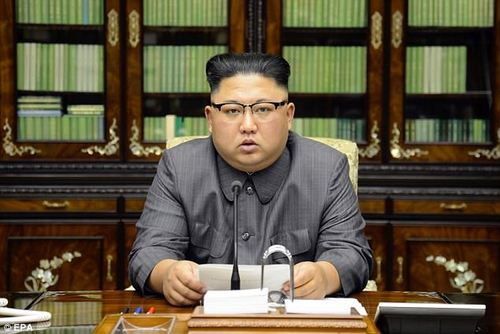 Dangerous man: Russian MP Anton Morozov, who just returned from a visit to Pyongyang, has said North Korea is preparing to launch another missile ‘in the nearest future’

Few international observers believe the North would actually attack the US or an allied country because there is no possibility it could win a war with America.

But Ri Yong Ho, North Korea’s Foreign Minister, raised another prospect – that the hermit nation could land a warhead in the Pacific Ocean.

Such a demonstration would prove that they have a viable nuclear weapon, without necessarily prompting American military action.

Kim believes securing such a weapon, and proving to the international community that it works, is the key to ensuring his regime’s survival.

Most experts agree that the North already has a missile capable of ranging most of the US, the Hwasong-14, which they have successfully tested multiple times.

Kim has also claimed to have a powerful hydrogen bomb that is small enough to fit on top of the missile, after the state carried out a sixth successful nuclear test earlier this year.

The final hurdle is in perfecting re-entry technology that would bring the warhead back to earth intact and on target.

It is not believed the North currently possesses this technology, as re-entry vehicles from previous Hwasong-14 tests were shown falling back into the ocean in flames.