Oakland left tackle Donald Penn confronted disorderly fans following the Raiders’ third consecutive defeat on Sunday, nearly coming to blows with one main antagonist as seen in a video that has since been posted on social media.

The 6-5, 305-pound Penn claimed in a tweet that the fan threw a bottle at his car, igniting a confrontation in the parking lot outside Oakland Coliseum. On Sunday evening, the 11th-year veteran admitted he nearly made the wrong decision before collecting himself and enlisting a security guard to end the dispute.

‘He threw a bottle at my car but I should of stayed in the car he was tryna get me to react so he could sue me glad I took a sec 2 think,’ read the tweet from Penn.

At no point in the video can anyone be seen throwing anything.

Penn, a 34-year-old Pro Bowl selection who signed a two-year, $21 million extension in September, was being heckled by fans after the Raiders lost to the visiting Baltimore Ravens, 30-17.

One fan in particular seemed to be the target of Penn’s displeasure.

According to TMZ, the fan is Salvador Chavarria, who claims he never threw a bottle at Penn’s car. Chavarria also insists he never engaged in an extortion attempt, as Penn had claimed.

Chavarria says he and Penn previously had a heated argument through Instagram’s direct messenger, where Penn ultimately challenged Chavarria to ‘say it to my face.’ 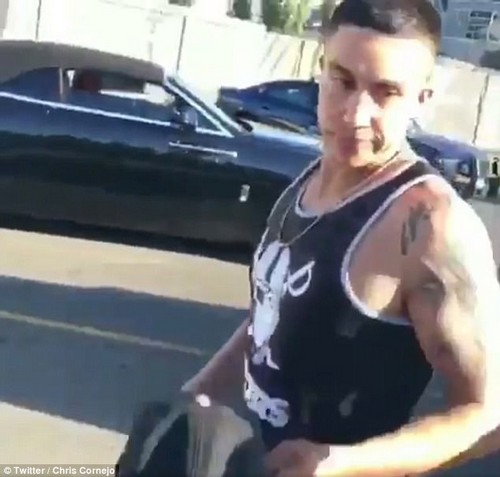 The fan, who has been identified by TMZ as Salvador Chavarria, claims he never threw a bottle at Penn’s car. The video, while not conclusive, does not depict Chavarria throwing anything

It’s hard to decipher what the Chavarria was saying in response, but the Pro Bowl left tackle can be heard yelling ‘I wish you would n*****,’ and ‘be a f****** fan’ 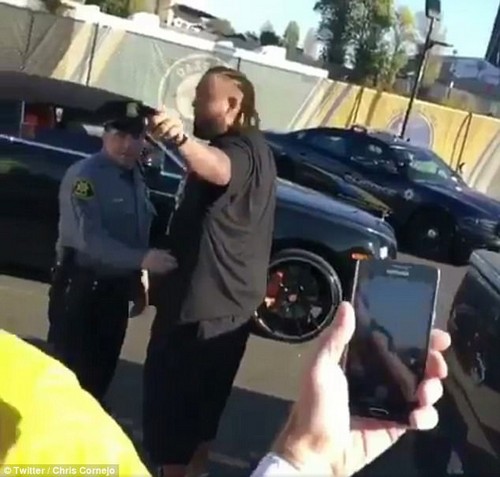 At one point in the social media skirmish, Chavarria told Penn: ‘Dont get our QB leg broken again.’

The statement was a reference to the 2016 season, when Penn yielded a sack on Christmas Eve that resulted in a broken leg for Raiders quarterback Derek Carr. Without their starting quarterback, the Raiders fell to Denver in the wild card round of the playoffs two weeks later.

It should be noted that Oakland was playing without Carr on Sunday after he suffered a back injury on October 1 when he was sacked by Denver Broncos defensive end Shelby Harris.

Penn may not have been culpable for that injury, but he did publicly blame himself for Carr’s injury in 2016, even though it was the only sack he yielded all season.

On Monday, Penn posted two pictures on Twitter that undercut Chavarria’s defense: one showed Chavarria and Penn smiling together in a shot that’s dated ‘a few months ago;’ and a screen grab of a conversation between Chavarria and someone else in which the Raiders fan wrote: ‘I keep dreaming of him Penn punching me if he sees me after the game!’

‘To all athletes out there be aware of fake fans tryna extort you,’ Penn wrote on Twitter. ‘I’m glad I didn’t punch dude like I wanted 2 he had this all planned out.’ 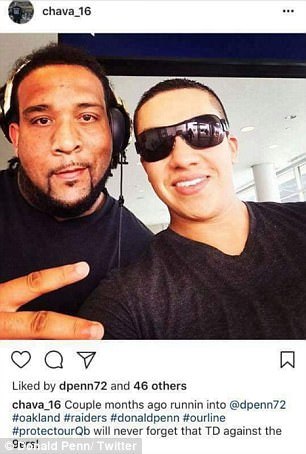 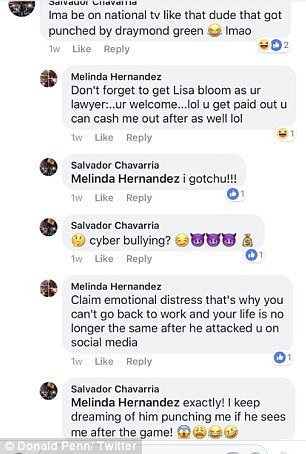 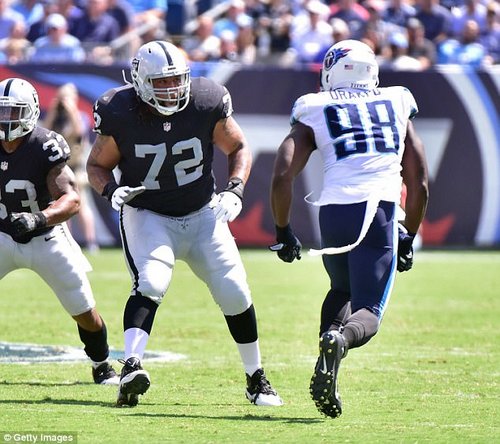 Penn, 34, has been selected to the Pro Bowl and recently signed a two-year $21 million extension with the Raiders