‘They’ll be able to cross state lines. And they will get great competitive healthcare, and it will cost the United States nothing,’ Trump told reporters on Tuesday morning. ‘Take care of a big percentage of the people that we’re talking about, too,’ he said.

Trump is taking the executive action to assist consumers who live in states where Obamacare has either gone belly up or premiums skyrocketed.

‘With Congress the way it is, I decided to take it upon myself,’ he announced. ‘So we’ll be announcing that soon, as far as the singing is concerned, but it’s largely worked out.’ 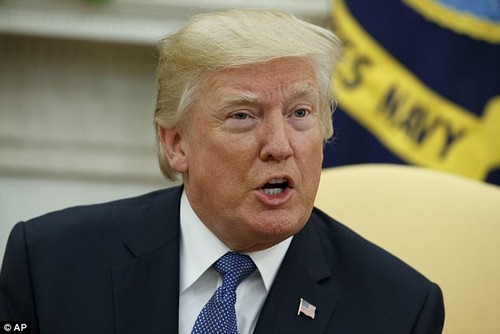 Republican lawmakers like Rand Paul and Ted Cruz have long plugged the plan as a way to increase consumer choice and lower costs. They wanted to include it in repeal and replace legislation, but that would have run afoul of the Senate rule they were relying on as a vehicle for their proposed reforms.

Trump said he last month that he may loosen a restriction on where insurance plans can be sold through fiat. He previewed the move again in a Tuesday morning tweet that said, ‘Since Congress can’t get its act together on HealthCare, I will be using the power of the pen to give great HealthCare to many people – FAST’.

Paul said weeks ago, on the heels of the Senate’s last Obamacare repeal failure, that Trump would be taking action in the near term.

‘I think there’s going to be big news from the White House in the next week or two, something they can do on their own,’ he told MSNBC in a Sept. 27 interview.

The Kentucky Republican added, ‘I believe that President Trump can legalize on his own the ability of individuals to join a group or a health association across state lines and buy insurance.’

That same day Trump affirmed his interest in an executive action that encompasses Paul’s proposal.

The president told reporters, ‘I am considering an executive order on associations and that will take care of a tremendous number of people with regard to healthcare, and I’ll probably be signing a very major executive order where people can go out, cross state lines, do lots of things and buy their own healthcare.’

Trump has long said that he would sign an order freeing up consumers to purchase health care from providers outside the state they reside in. It was billed as part two of his administration’s three-step Obamacare repeal plan.

Trump confirmed his intention to sign the measure easing health insurance regulations at the top of a meeting with Henry Kissinger, a secretary of state to two previous presidents

The administration argued earlier this year that it could not ease regulations like this one until the House and Senate passed Obamacare repeal.

Procedural rules in the Senate prevented the measure from being inserted directly into a healthcare bill because lawmakers were relying on a process called reconciliation that applies only to budgetary items.

Through reconciliation, the GOP could use its simple majority to pass a repeal bill. The party was ultimately unable to swing enough senators its way before an end-of-September deadline.

As lawmakers like Paul argued that the measure should be in the GOP’s legislation, regardless of the rules, Trump said in a tweet, ‘Don’t worry, getting rid of state lines … will be in phase 2 & 3 of healthcare rollout.’

The executive order Trump says he will soon sign may help him win over lawmakers like Paul who will make or break a future health reform vote.

‘I think Rand will be there for us,’ Trump recently told reporters.

Trump envisions a new vote to repeal and replace Obamacare at the beginning of next year. Vice President Mike Pence has promised reforms by the end of next year.

The president has said that he’s talking to Senate Democratic leader Chuck Schumer about a short-term fix to Obamacare, also.