Republican Rep. Marsha Blackburn’s Senate campaign announcement ad has been blocked by Twitter over a statement the abortion rights opponent makes about the sale of fetal tissue for medical research.

Blackburn, who is running for the seat being opened by the retirement of Tennessee Sen. Bob Corker, boasts in the ad that she ‘stopped the sale of baby body parts.’ A Twitter representative told the candidate’s vendors on Monday that the statement was ‘deemed an inflammatory statement that is likely to evoke a strong negative reaction.’

Twitter said the Blackburn campaign would be allowed to run the rest of the video if the flagged statement is omitted. While the decision keeps Blackburn from paying to promote the video on Twitter, it doesn’t keep it from being linked from YouTube and other platforms.

Blackburn took to Twitter to urge supporters to re-post her video and join her in ‘standing up to Silicon Valley.’

SCROLL DOWN TO SEE THE CONTROVERSIAL VIDEO 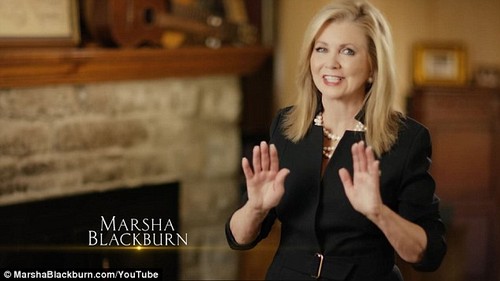 Tennessee Rep. Marsha Blackburn is running for an open U.S. Senate seat, and Twitter has banned her campaign from promoting her launch video 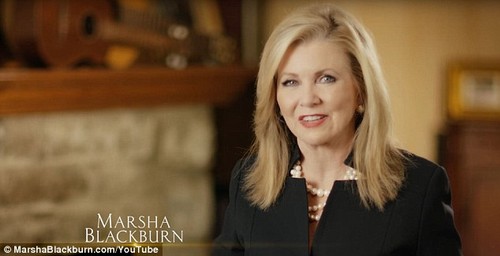 Blackburn boasts in the video that she ‘stopped the sale of baby body parts’ from abortion providers, and adds: ‘Thank God’

Blackburn was the chair of a Republican-run House panel created to investigate Planned Parenthood and the world of fetal tissue research that earlier this year urged Congress to halt federal payments to the women’s health organization. Democrats said the GOP probe had unearthed no wrongdoing and wasted taxpayers’ money in an abusive investigation.

The panel was created after anti-abortion activists released secretly recorded videos in 2015 showing Planned Parenthood officials discussing how they sometimes provide fetal tissue to researchers, which is legal if no profit is made.

Fetal tissue research has strong backing among scientists for its value in studying Down syndrome, eye disease and other problems. But Blackburn’s committee report said fetal tissue ‘makes a vanishingly small contribution to clinical and research efforts, if it contributes at all,’ and recommended curbing federal grants for such research.

Blackburn’s nearly two-and-a-half minute video features footage of her shooting a gun, espousing her ‘100 percent pro-life’ credentials and taking fellow Republicans in the Senate to task for failing to repeal the Obama health care law.

‘I know the left calls me a wingnut or a knuckle-dragging conservative,’ she said in the video. ‘And you know what? I say that’s all right. Bring it on.’ 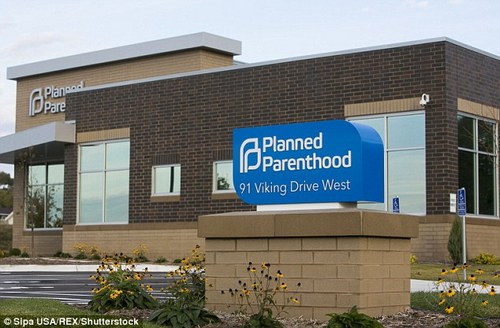 Blackburn is running for the Senate seat being opened by the retirement of Tennessee Sen. Bob Corker

U.S. Rep. Marsha Blackburn announced her campaign for U.S. Sen. Bob Corker’s seat on Thursday in a video that slams the ‘totally dysfunctional’ Senate and Republicans in particular for their failure to repeal the Affordable Care Act.

Blackburn also touts her support for gun rights, opposition to abortion rights and calls for more limits on government spending in the video.

‘I know the left calls me a wingnut or a knuckle-dragging conservative,’ she said. ‘And you know what? I say that’s all right. Bring it on.’

‘While I have loved being a mayor and a governor, I don’t feel the same call to run for Senate at this point,’ said Haslam. He said the hyper-partisanship that surrounds Congress was a factor in his decision.

‘The result is a Washington that is broken because neither side is willing to say: “I get it, half of the country feels very differently – what can we work out to make it better?”‘ the governor said.

Haslam’s popularity in the state and his vast personal wealth would have made him a strong candidate, despite lingering anger among some Republicans over his call to Donald Trump to abandon his presidential nomination last year following the release of a videotape in which Trump boasted about groping women.

Corker, who announced last w
eek that he wouldn’t seek a third term, also publicly criticized the Republican president, for his response to a deadly white nationalist rally in Virginia. Corker questioned whether Trump had the ‘competence’ or ‘stability’ to succeed in office.

Blackburn has made her own critical comments about ‘inappropriate and pointless tweets’ from the president, but was quick to embrace the Trump agenda in her campaign announcement video.

‘I believe in President Trump’s immigration ban, and I’ll fight with him every step of the way to build that wall,’ she said. ‘I stand when the president walks in room, and yes, I stand when I hear the Star Spangled Banner.’

Former U.S. Rep. Stephen Fincher is another potential Republican Senate candidate, and is expected to make a decision in the coming days. Haslam hasn’t said whether he’ll endorse a Republican in the race.

State Sen. Mark Green, who withdrew as Trump’s nominee for Army secretary earlier this year amid criticism of his comments about gay and transgender people, said he will run for Blackburn’s House seat.

Utah man dies when helicopter debris falls on his head