Zelenskiy spoke with NATO Secretary General Jens Stoltenberg after an increase in clashes and Russian military movements on the border raised fears of an escalation of the separatist conflict in eastern Ukraine.

In a tweet after the call, Zelenskiy said it was time for NATO to move forward with Ukraine’s longstanding desire for membership.

He said Kiev was committed to defense reforms requested by the alliance for membership.

“But reforms alone will not stop Russia,” said Zelenskiy, whose government has said it hopes to be invited this year to join a NATO Membership Action Plan (MAP).

Ukrainian President Volodymyr Zelenskiy on Tuesday urged NATO to speed up his country’s membership in the alliance, saying it was the only way to end fighting with pro-Russia separatists.

“NATO is the only way to end the war in Donbass. Ukraine’s MAP will be a real signal for Russia.”

Fears have been mounting of a major escalation of the conflict in eastern Ukraine, where government forces have battled separatists in the mainly Russian-speaking Donbass region since 2014.

Ukraine last week accused Russia of massing thousands of military personnel on its northern and eastern borders as well as on the Crimean peninsula annexed by Moscow in 2014.

Kiev’s Western allies have rushed to its defense, with a series of statements warning Russia against taking further action.

Stoltenberg said Tuesday he had called Zelenskiy “to express serious concern about Russia’s military activities in and around Ukraine and ongoing ceasefire violations.”

The United States and Britain have also expressed their solidarity, with the Pentagon last week saying U.S. forces in Europe had raised their alert status.

The Kremlin has not denied the troop movements but insisted that Moscow was “not threatening anyone.”

Kremlin spokesman Dmitry Peskov told reporters Tuesday that NATO membership for Ukraine would do no good in resolving the conflict.

“We very much doubt that this will help Ukraine settle its domestic problem,” Peskov said. “From our point of view, it will only worsen the situation.”

“If you ask the opinion of several million people living in the self-declared republics (in the east) you will see that for them NATO membership is deeply unacceptable,” he said.

The reports of a Russian buildup come amid a dramatic increase in clashes along the frontline in recent weeks. At least 23 Ukrainian soldiers have been killed since the start of the year, compared to 50 in all of 2020.

Ukraine’s military said on Tuesday that two soldiers were shot dead on Monday after separatists opened fire on their positions with machine guns and grenade launchers.

The first incident took place near the city of Avdiivka, six kilometers (four miles) north of Donetsk, the separatists’ de facto capital, and the second near the town of Zolote-4 in Lugansk region, the military’s press service told AFP.

Ukraine’s ground forces meanwhile announced 10 days of exercises for 600 reservists in the south of the country, aimed in particular at “protecting the administrative border with Crimea” and “landing-accessible parts of the coast.”

The conflict broke out in 2014 following Moscow’s annexation of Crimea and has since claimed more than 13,000 lives.

Fighting had subsided before the recent outbreak of violence, with a ceasefire agreed last year having seen clashes drop to their lowest level in years.

Moscow and Kiev have accused each other of being behind the renewed clashes. 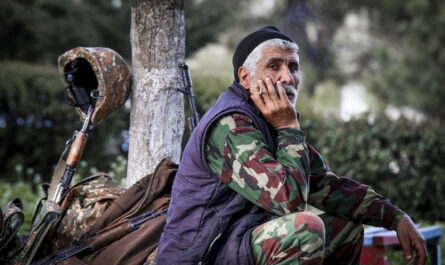 What Is Russia’s Role in the Armenia-Azerbaijan Conflict?