Health commissioner Stella Kyriakides said the EU “will take any action required to protect its citizens and its rights” after the company cut its initial deliveries to the bloc by up to 60 per cent.

The EU, which is expected to approve the Oxford/AstraZeneca vaccine on Friday, accused the company of “lack of clarity and insufficient explanations“.

“Vaccine developers have societal and contractual responsibilities they need to uphold,” Ms Kyriakides said after meeting with with AstraZeneca on Monday.

She added: “We want clarity on transactions and full transparency concerning the export of vaccines from the EU.

“In the future, all companies producing vaccines against Covid-19 in the EU will have to provide early notification whenever they want to export vaccines to third countries.” 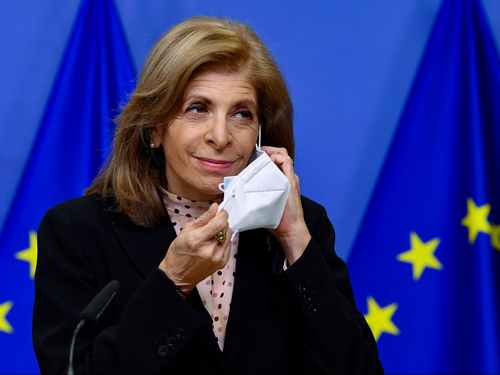 The controls could potentially affect distribution of the Pfizer vaccine, which is manufactured in Belgium.

However the UK government remained confident that vaccine supply, with the AstraZeneca jab largely being made in Oxfordshire and Staffordshire, will ensure it meets its first target.

A spokeswoman said: “We remain in close contact with all of our vaccine suppliers. Our vaccine supply and scheduled deliveries will fully support offering the first dose to all four priority groups by 15 February.”

German health minister Jens Spahn backed the vaccine export controls plan, saying: “We, as the EU, must be able to know whether and what vaccines are being exported from the EU.

“Only that way can we understand whether our EU contracts with the producers are being served fairly. An obligation to get approval for vaccine exports on the EU level makes sense.”

The EU has signed six vaccine contracts for more than 2 billion doses, but only the Pfizer-BioNTech and Moderna jabs have been approved for use so far and the bloc is facing mounting criticism for its slow vaccine rollout in comparison to other countries such as the UK and Israel.

Pfizer has delayed shipments of its vaccine for several weeks in order to increase capacity at its Belgian factory and Italy has threatened to sue the firm over the delays.

A crocodile with a motorbike tyre around its neck in a river in Palu, Central Sulawesi province, months after Australian television presenter and crocodile expert Matthew Nicholas Wright failed to trap it to remove the tyre

Last week Astrazeneca indicated it was planning to reduce its first consignment to the EU, due by March, from 80 million to 31 million. The EU has committed to buying 300 million doses with an option on 100 million extra shots.

Ms Kyriakides said this new schedule was “not acceptable” and pointed to the EU’s investment of 2.7 billion euros ($3.28bn, £2.4bn) in the development of several vaccines..

AstraZeneca said in a statement that its chief Pascal Soriot had “stressed the importance of working in partnership and how AstraZeneca is doing everything it can to bring its vaccine to millions of Europeans as soon as possible.”