Donald Trump has repeatedly pledged that his administration will not allow evictions during the coronavirus pandemic, but an executive order he claims would “solve that problem” does not prevent millions of Americans from being at risk of losing their homes.

Eviction moratoriums are lifting across the US, and millions of out-of-work Americans are vulnerable to losing their housing, according to housing advocacy groups and tenant organisations.

On Wednesday, the president was emphatic in his claim that renters are “not going to be evicted” because of his order. 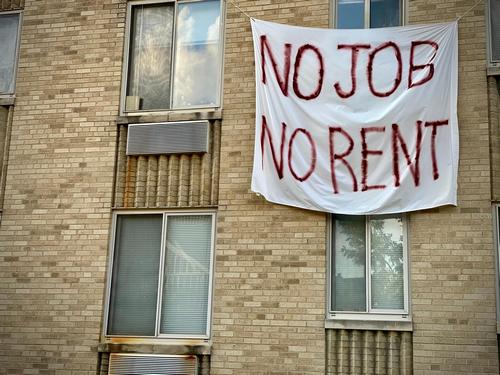 The order, signed on 8 August, merely directs federal agencies to “consider” whether halting evictions are necessary as a health precaution during the pandemic, but it does not unilaterally prevent landlords from evicting tenants. It also directs Treasury Secretary Steve Mnuchin and House Secretary Ben Carson to “identify any and all available funds” to support renters without a mechanism to deliver them.

On Monday, White House press secretary Kayleigh McEnany said the president “did what he can within his executive capacity”.

With the passage of the CARES Act in March, a federal moratorium on evictions was put in place for properties with federally backed mortgages and tenants receiving government housing assistance, provisions that cover roughly 30 per cent of rental units in the US, according to the Urban Institute.

But those protections expired on 24 July. The president’s order does not revive the federal moratorium.

The National Low Income Housing Coalition has called the order an “empty shell of promises to renters.”

His order “does nothing to prevent evictions and homelessness and acts only to mislead renters into believing that they are protected when they are not,” the organisation said in a statement.

“This executive order is reckless and harmful, offering false hope and risking increased confusion and chaos at a time when renters need assurance that they will not be kicked out of their homes during a pandemic,” it said.

Housing organisations predict as many as 40 million renters could be at risk of eviction by the end of 2020 without any significant relief, as the US endures double-digit unemployment, a worrying Covid-19 infection rate and rising deaths. Tenants organisations and housing groups have resisted local efforts to re-open eviction courts with a “cancel rent” mantra, as lawmakers wrestle with legislatures to prevent landlords from removing tenants due to nonpayment.

The Lincoln Project also targeted the president’s failure to prevent evictions, pointing to stalled efforts from Senate Republicans and the White House to extend $600 a week in additional federal unemployment benefits, which expired at the end of July.

House Democrats passed two measures with up to $100 billion for rental assistance, but the Republican-dominated Senate has not agreed to take up the legislation.

The National Low Income Housing Coalition has urged the president to work with Congress to put in place a national moratorium on all evictions with at least $100 billion in emergency rental assistance and housing vouchers, and another $11.5 billion for emergency resources for people experiencing homelessness.

“Without a significant and sustained federal intervention, America will experience an increase in homelessness the likes of which we haven’t seen since the Great Depression,” the organisation’s president Diane Yentel said. “Allowing tens of millions of people to lose their homes during a pandemic is cruel and senseless.”