Ultranationalist supporters of separatists in eastern Ukraine disrupted a movie screening at the Artdocfest film festival in Moscow on Wednesday night, the organizers said on Instagram.

This was the second major attack this year on Artdocfest, a popular Russian documentary film festival which has been the target of conservative and nationalist-oriented groups in recent years.

About ten SERB (South-East Radical Bloc) activists tried to disrupt the screening of “The Way Home” by throwing paint on the screen, but were caught before carrying out the act, the festival’s organizers said on Instagram.

“At the moment when the SERB team began to mix the paint, the guards noticed it on surveillance cameras,” the Artdocfest post said.

“The Way Home” tells a story of a 28-year-old young man who “moved from Crimea to a Ukrainian village after the annexation of the peninsula.” 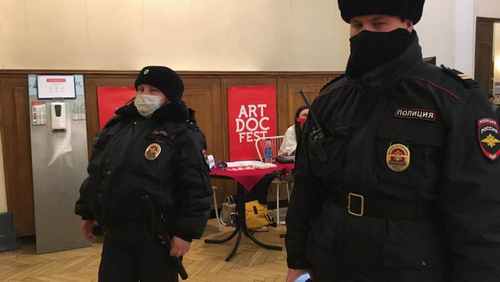 “The provocateurs called the police because they objected to the word ‘annexed’ in the film text. The police did not know what to do,” director Kirill Nenashev told MBH Media.

The director said that there were quite a lot of police officers, “about 15 people with patrolmen on the street.”

Earlier, the director and president of Artdokfest, Vitaly Mansky told MBH Media that the screening of the film “Summer War” was postponed due to information about an upcoming attack on moviegoers by SERB.

“A children’s animated film was being premiered at the same time in a hall nearby, so I couldn’t risk it. I canceled the show, although the film fully complies with the requirements of Russian legislation,” Mansky told MBH Media.

“The film was postponed because we have already been attacked,” he said.

In 2017, SERB disrupted a showing of a film about a disbanded Ukrainian ultranationalist battalion, covering the projector and releasing noxious gas in the auditorium.

Earlier this week, Moscow’s film festival organizers had to pull a movie about a gay Chechen MMA fighter from the lineup after receiving threats.

The Artdocfest in St. Petersburg, was also forced to cancel its screening of the film after a self-identified “anti-gay” activist filed a complaint with Russia’s consumer protection watchdog, alleging that the festival was promoting “LGBT values” among minors and violating anti-coronavirus restrictions.