US Agriculture Secretary Sonny Perdue appeared to flagrantly violate the ethics law prohibiting government officials from making political statements during officials events when he advocated for “four more years” for President Donald Trump at an official function in Mills River, N.C., on Monday.

“Mr President, as you saw those throngs of people lining both sides of the road from the airport all the way to Mills River here, those were those forgotten people that voted for you for 2016. And I’ve got better news for you: They and many others are gonna vote for you for four more years in 2020,” Mr Perdue said at an event touting the US Department of Agriculture’s (USDA) “Farmers to Families Food Box Program” that is sending excess produce to families in need during the coronavirus.

Mr Perdue’s remarks, which followed the president’s, were broadcast live on the White House’s official live streaming channel on YouTube, an apparent violation of the Hatch Act, which prohibits government employees from engaging in partisan activities while on duty. 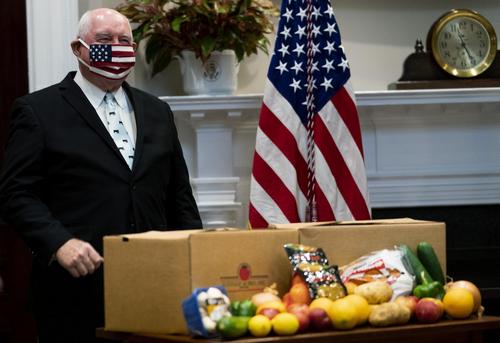 Mr Perdue made at least two other references during his roughly three-minute speech to the upcoming presidential election this November between Mr Trump and Democratic nominee Joe Biden.

“Let me tell you what, people don’t vote for personalities. They vote for policies and people that get it done, like Donald J Trump,” Mr Perdue said.

“You know, that’s what people want. They want somebody who can get it done. They want a decider-in-chief. And if you’ve ever sat in that office, this man can decide,” he said.

Mr Perdue credited the president with creating the idea for the $3bn programme to purchase fresh produce, dairy and meat products from American producers and distribute them to food banks, faith-based organisations, and other charitable groups handing out meals to poor families.

The president is preparing to deliver his acceptance speech for the Republican presidential nomination “live from the White House” Thursday, he announced last week.

Such a move could expose any government officials present for the speech to an array of ethics concerns and Hatch Act violations, experts have warned.

“Here we go …. again. A staged political event at the White House. Every White House staff member who participates in this violates the Hatch Act,” Richard W Painter, the former chief White House ethics lawyer under President George W Bush, tweeted earlier this month about the spectre of a Trump acceptance speech at the White House. How Has Society Changed in the Wake of the Winter Protests?