The number of executions has plunged by 26 per cent in the last year, according to a leading human rights group.

The newly-released annual report, called Death Sentences and Executions 2020, also found that the number of death sentences known to have been imposed, 1,477, was also down by 36 per cent compared to 2019.

China is still thought to still be the world’s most prolific user of capital punishment, with thousands of people executed every year, according to Amnesty. But the authorities in the country consider the information a state secret, so the NGO’s report does not have data on the country.

The Independent has contacted China’s foreign affairs ministry for comment. 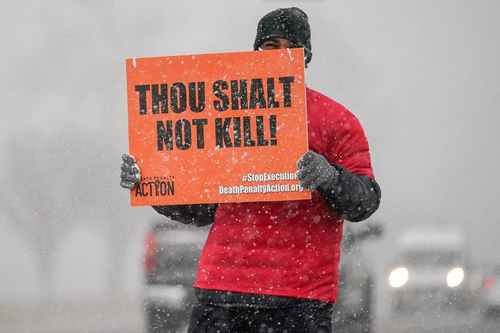 Second to China was Iran, with at least 246 executions, then Egypt who bucked the global downward trend by tripling its yearly execution figure to at least 107.

Between them, Iran, Egypt, Iraq and Saudi Arabia accounted for the vast majority, 88 per cent, of all known executions.

The report said that the coronavirus pandemic was one contributing factor into why executions declined.

Agnès Callamard, secretary general of Amnesty International, said: “As the world focused on finding ways to protect lives from Covid-19, several governments showed a disturbing determination to resort to the death penalty and execute people no matter what.

“The death penalty is an abhorrent punishment and pursuing executions in the middle of a pandemic further highlights its inherent cruelty.

“Fighting against an execution is hard at the best of times, but the pandemic meant that many people on death row were unable to access in-person legal representation, and many of those wanting to provide support had to expose themselves to considerable – yet absolutely avoidable – health risks.

“The use of the death penalty under these conditions is a particularly egregious assault on human rights.“ His political future at stake, Erdogan seeks to remake Turkey