The next measure of their ire — and Kemp’s standing as he seeks re-election 2022 — comes Saturday as many local Republican committees across Georgia consider proposals to censure the governor for not reversing President Joe Biden’s victory in Georgia. The county conventions come one day after Kemp drew his first 2022 primary challenger after weathering Trump’s ire for months.

“It doesn’t matter what Kemp does,” said conservative activist Debbie Dooley, who is helping lead the censure effort. “The grassroots is angry.”

For now, Kemp remains a clear favorite to win his party’s nomination for a second term. His only announced opponent is a former Democratic state lawmaker, Vernon Jones, who sought the GOP spotlight by endorsing Trump’s reelection bid and then embracing the former president’s false claims that the 2020 election was rigged.

Kemp, meanwhile, has capitalized on Georgia becoming the first Republican-run state to adopt new voting procedures intended to tighten rules around absentee mail voting, among other changes. The governor doubled down on his position amid corporate criticism and Major League Baseball’s decision to move its summer All-Star Game from Georgia. 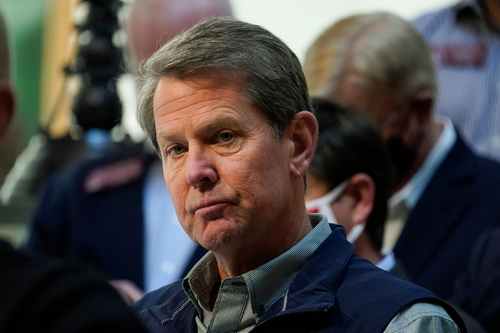 That’s been enough to draw plaudits from some Republicans, especially in suburban Cobb County, where the Atlanta Braves would have hosted the All-Star Game. Yet the censure push hasn’t gone away.

That’s a fraction of Georgia’s 159 counties, but the potential fallout is enough that Kemp’s allies have been working local Republican ranks to try to spike the resolutions.

Ryan Mahoney, Kemp’s top campaign adviser, said the strategy is “to remind grassroots activists that he’s been a champion for life, for economic growth and opportunity, expanding access to health and now leading the fight against cancel culture.”

Jones offered a different assessment of the governor Friday as he launched his 2022 campaign.

“You’ve seen me stand right beside Donald Trump, just like you. I have done more as a conservative fighting side by side for you and for our elections, and for America first, than the governor and all those RINOs combined,” Jones said. RINO is an acronym for “Republican in name only.”

Trump has not indicated whether he will endorse Jones.

Those close to Kemp see Jones’ candidacy as perhaps the best kind of primary challenge for an incumbent.

With Jones drawing attention, Kemp can raise money and make his case to conservatives who might not otherwise be interested. But Jones, they argue, doesn’t come to the matchup with the same established, high-profile conservative identity as other figures Trump loyalists have urged to run, most notably former Rep. Doug Collins.

Kemp’s allies, though, acknowledge frustrations within the GOP base, and they recognize the governor’s reelection isn’t just about winning the nomination. It also could depend on emerging from a primary with the GOP coalition intact enough to win a competitive general election.

The counties that already censured Kemp — Murray and Whitfield — demonstrate the risks.

Trump got 70% of the vote in Whitfield last November. Kemp got an even larger share at 72% in 2018. The censure resolutions nonetheless passed 34-2. In neighboring Murray County, Kemp’s 84% vote share in 2018 exceeded Trump’s 82% in November. Murray Republicans adopted the censures by acclamation, meaning no recorded vote.

Kemp’s surge in small-town and rural turnout in 2018, exceeding Trump’s vote shares in less populous counties, was necessary for him to defeat Democrat Stacey Abrams by just 55,000 votes out of 4 million votes cast. Trump, with just a slight drop, ended up losing Georgia to Biden by about 12,000 votes out of 5 million cast.

And in their January Senate losses, former Sens. David Perdue and Kelly Loeffler — both viewed as insufficiently loyal to Trump by a narrow slice of conservatives — fell short even of Trump’s support. And their statewide shortfall was wider than Abrams’ deficit to Kemp in 2018.