More than a hundred people are feared dead after a mountain glacier in the Indian Himalayas broke away, sending a deluge of water and debris crashing into nearby dams and homes.

Three people were confirmed dead, more than a dozen were trapped and 150 still missing after the flood hit the northern state of Uttarakhand on Sunday morning.

The devastation was triggered by a portion of the Nanda Devi glacier which broke off, sending water and mud trapped behind it surging down the mountain and damaging two hydropower projects where dozens of staff were working.

Vivek Pandey, a spokesman for the Indo Tibetan Border Police, said at least 150 people were working at the two power plants and three bodies were recovered near a tunnel of the Dhauliganga project, where at least 16 workers remained trapped.

Om Prakash, chief secretary of Uttarakhand, said 100 to 150 people were feared dead but the actual number had not yet been confirmed.

India’s prime minister, Narendra Modi, tweeted that he was “constantly monitoring the unfortunate situation in Uttarakhand”.

He said: “India stands with Uttarakhand and the nation prays for everyone’s safety there.” 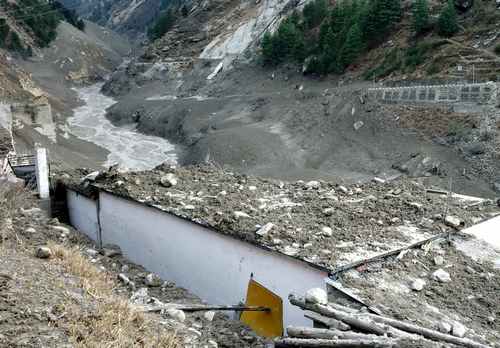 A witness described a wall of dust, rock and water as an avalanche roared down the Dhauli Ganga river valley.

Several teams of rescuers were sent to the affected area, including soldiers and helicopters.

Concerns have been raised about the impact of power projects along the Alaknanda River and its tributaries.

Uma Bharti, India’s former water resources minister and a senior leader of Mr Modi’s party, criticised the construction of a power project in the area.

“When I was a minister I had requested that Himalaya is a very sensitive place, so power projects should not be built on Ganga and its main tributaries,” she said on Twitter, referring to the main river that flows from the mountain.

Environmental experts also called for a halt to big hydroelectric projects in the state.

“This disaster again calls for a serious scrutiny of the hydropower dams building spree in this eco-sensitive region,” said Ranjan Panda, a volunteer for the Combat Climate Change Network that works on water, environment and climate change issues.

“The government should no longer ignore warnings from experts and stop building hydropower projects and extensive highway networks in this fragile ecosystem.”

In 2013, more than 1,000 people were killed in Uttarakhand after heavy rains triggered landslides and floods, washing away thousands of houses.