Empty seats are being filled by 30,000 cardboard cutouts of fans that were sold for $100 each. Included in the total attendees are 7,500 healthcare workers invited as guests of the NFL, all of whom have been vaccinated against the virus.

The majority are from Tampa and the wider central Florida region, but all 32 NFL clubs around the nation have also selected vaccinated healthcare workers from their hometowns to attend.

Frontline healthcare workers will be honoured throughout the broadcast on CBS.

Outside the stadium a small group of anti-vaxxers protested against the Covid-19 vaccine, holding up signs claiming vaccines cause injury and death.

The group, dressed as referees, distributed unfounded claims about infectious diseases expert Dr Anthony Fauci and accused the media of lying to the American people about the vaccine, USA Today reports. 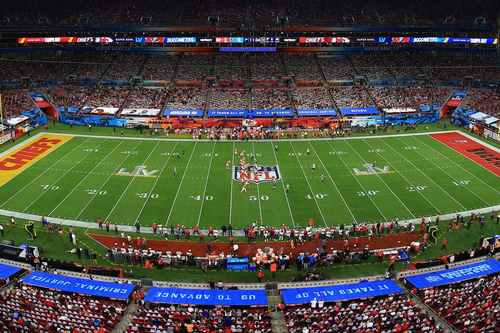 NFL commissioner Roger Goodell said the decision had been reached “following discussions with public health officials, including the CDC, the Florida Department of Health, and area hospitals and healthcare systems.”

“These dedicated healthcare workers continue to put their own lives at risk to serve others, and we owe them our ongoing gratitude,” said Mr Goodell. “We hope in a small way that this initiative will inspire our country and recognize these true American heroes.

He added: “This is also an opportunity to promote the importance of vaccination and appropriate health practices, including wearing masks in public settings.”

Despite a mask mandate introduced by Tampa mayor Jane Castor, a number of people outside the stadium were seen maskless.