The UK’s announcement of new quarantine restrictions for people arriving from France has prompted a last-minute rush to cancel travel plans and a mass exodus from British holidaymakers already on the continent.

From 4am on Saturday, travellers arriving to the UK from Aruba, France, Malta, Monaco and the Netherlands will be forced to self-isolate for two weeks. France warned that it will introduce “reciprocal measures” to the UK.

It has left people on both sides of the Channel scrambling to rearrange plans ahead of the new rules being introduced, with the Eurotunnel website seeing long queues as thousands of customers attempted to make or change bookings.

Polly Courtney, a London-based screenwriter and novelist, was due to drive to France on Friday morning for a family camping holiday with her two young children but was forced to cancel at the last minute.

“The government handled the communication of this really, really badly,” she told The Independent. “We were left googling until 10pm on Thursday night, learning of the new rules through leaked plans circulating online. As with everything in this pandemic, the government has hedged bets, been slow to announce and poor to communicate.”

The new rules mean that Ms Courtney’s travel insurance no longer covers her or her family, as the trip goes against official FCO advice.

“The quarantining would have been hard but doable – it’s the travelling uninsured that makes it impossible, especially with small children and a pandemic,” she said. “It’s not quite the Loire Valley, but we’ve booked a week in a field near Eastbourne instead.” 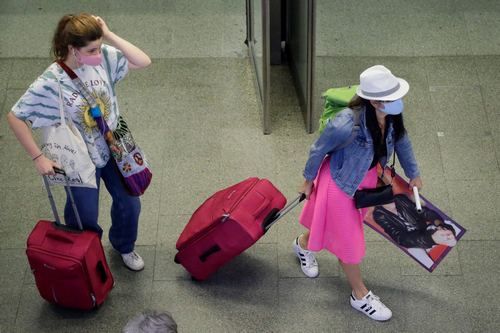 Other families with trips planned to France on Friday have decided to press ahead, despite having to quarantine on their return.

For Isabelle Pyke, a French scientist based in Cambridge, it is the first chance she has had to visit her sister since before the pandemic.

“What’s frustrating is that we don’t feel that it’s justified. It would make more sense to self isolate for a couple of days, get tested, and then depending on results continue to self isolate or not. Testing capacity is high and underutilised, so why not use it? It’s so frustrating.”

Government rules require people arriving from non-exempt countries to self-isolate for 14 days, or else face fines of between £1,000 and £3,200. Visitors are forbidden unless it is for medical care or assistance, and leaving your home for any non-emergency reason – even to walk the dog – is forbidden.

A quirk in the rules mean that other household members are not required to quarantine, “unless they travelled with you or you develop symptoms of coronavirus“. This has allowed Transport Secretary Grant Shapps to end his quarantine since returning from Spain, while his family members that returned later continue to self-isolate.

One of these is Joanna York, a Paris-based journalist who was planning to travel to the UK to visit friends and family.

“My trip was for 12 days, so it wouldn’t even be enough time to complete the quarantine before I came back to France,” she said.

“I’ve changed my outgoing ticket for a Eurostar train this evening but it feels pretty arbitrary. Realistically, what difference would it make if I travelled tonight or tomorrow? Giving 48 hours notice instead of just over 24 hours would have made a big difference.”

Eurostar is among several companies offering passengers free transfers, though many have also warned that all services before the deadline are already fully booked.

Eurotunnel warned passengers: “There is no more ticket availability. Please do not arrive at the terminal unless you have a ticket valid for travel today.”

Eurostar told customers: “Please only come if you have a valid ticket for travel today.”

France’s Macron ‘the No. 1 Terrorist in the World,’ Chechen Mufti Says