On October 3, just like in the 45 seasons before it, SNL will return for its 46th go, live from New York. That’s just about the only thing that’s stayed the same.

A pandemic, protests, climate change, and an incendiary election are rocking the country. That means lots of material for SNL’s performers and musical acts, who take pride in reflecting, and usually roasting, the news of the moment. Here are some of the most iconic political moments from SNL.

One can only imagine SNL’s incoming takes on the Supreme Court in 2020, now that Ruth Bader Ginsburg’s death is roiling Washington. Before that, there was the Kavanaugh spectacle. Amid the #MeToo movement, and facing detailed allegations of sexual assault from a former classmate, the now-Justice Kavanaugh delivered a tearful, table-thumping performance denying the allegations. In a cold opening, Matt Dimon portrayed the wholeprocess as a fratty farce. “I’m not backing down, you sons of bitches!” Damon vows, “I don’t know the meaning of the word stop!”

A Roast at the Correspondents’ Dinner (2011)

He wasn’t on the SNL stage at the time, but Seth Meyers, then head writer and Weekend Update anchor, delivered a blistering roast of Donald Trump at the 2011 White House Correspondents’ Dinner. Mr Trump was then more of a cultural punchline than a serious contender. “Donald Trump has been saying he will run for president as a Republican,” Meyers said, “which is surprising since I just assumed he was running as a joke.” The burns were so bad some believe they encouraged Trump to get more serious about making a name in politics. 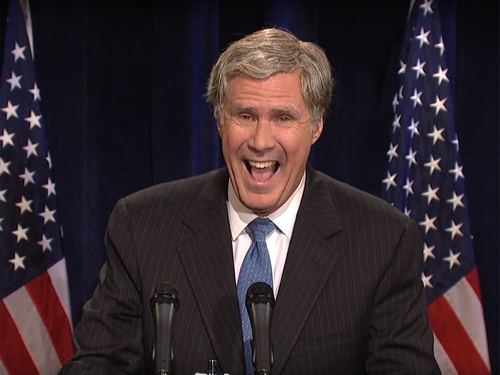 Tina Fey’s turn as a hokey, disastrously ill-informed Sarah Palin during the 2008 presidential race was so iconic it has likely overtaken many people’s memory of the actual candidate. Fey’s jab at the former Alaska governor’s inexperience in foreign policy— “I can see Russia from my house!”—was so convincing many people now falsely believe Palin said it herself. The portrayal was so uncanny that political scientists have even studied the “Fey effect” on voters that year.

Sometimes, you can just tell a performer is having fun. Will Ferrell clearly loved impersonating George W Bush—he eventually made a Tony-nominated play out of his performance called You’re Welcome America—including his memorable spoof of Bush’s post-9/11 foreign policy “Axis of Evil.” Ferrell’s version of the axis included “Iran, Iraq, and one of them Koreas.”

Barely two weeks after the Twin Towers fell, SNL had the monumental task of making New York, and the world, laugh again during a moment of deep grief. “Can we be funny?” asked showrunner Lorne Michaels in the opening. “Why start now?” said Mayor Rudy Giuliani, surrounded by 9/11 first responders. This moment, sad and silly, capped off an episode that deftly balanced humor and mourning.

Long before Spotlight and other media brought clergy sex abuse to the mainstream consciousness, Irish singer Sinéad O’Connor tore up a picture of Pope John Paul II before a stunned audience during her performance on SNL. It prompted waves of hate mail and public backlash from stars ranging from Sinatra to Madonna. Partly due to misunderstood public protests like this, O’Connor has retreated from the public eye.

The charismatic fellow Republican Ronald Reagan provided plenty of material for SNL, but the show initially had a harder time with George HW Bush, who didn’t have the same kind of flair. That is, until Dana Carvey started impersonating him as equal parts dork and patriarch. The impression was so good Bush and Carvey eventually became friends.

SNL doesn’t just train its fire on presidential politics. One of the show’s boldest ever sketches, “White Like Me,” featured Eddy Murphy in full white-face makeup, satirising the deep racial inequality of cities like New York in the 1980s. It’s a painful laugh since it’s still so relevant today.

Following Richard Nixon’s resignation, Dan Aykroyd’s played him as an unrepentant salesman in this 1978 cold open, where an awkward and defensive Nixon laments that in Washington, people “Don’t buy books by crooks.” Wait until he hears about 2020. What Does the Kremlin Really Think About Afghanistan?