Acting Secretary of Homeland Security Chad Wolf has resigned, becoming the third cabinet member to leave the Trump administration since the assault on the Capitol.

The news comes amid widespread concerns for security across the nation following the riot, particularly regarding the inauguration on 20 January as the department plays a crucial role in protecting the event from threats.

In a letter to the department, Mr Wolf said he was resigning due to the “ongoing and meritless court rulings regarding the validity of my authority as acting secretary”.

He said it was diverting attention and resources away from the department during the “critical time of a transition of power”.

Pete Gaynor, administrator of the Federal Emergency Management Agency will step into the role for the final days of Donald Trump’s presidency.

Mr Wolf had previously said he would not leave before the inauguration: “to ensure the Department’s focus remains on the serious threats facing our country and an orderly transition”. 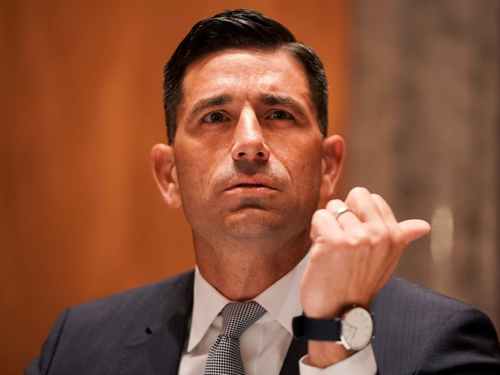 Mr Wolf condemned the rioting that occurred after the president encouraged his supporters to march on Congress.

“What transpired yesterday was tragic and sickening. While I have consistently condemned political violence on both sides of the aisle, specifically violence directed at law enforcement, we now see some supporters of the president using violence as a means to achieve political ends. This is unacceptable. These violent actions are unconscionable, and I implore the president and all elected officials to strongly condemn the violence that took place yesterday,” Mr Wolf said in a statement.

“Every American is guaranteed the right to peacefully protest, but once those protests become violent, we should enforce our laws and bring those responsible to justice – regardless of political motivations.”

His nomination to be made Homeland Security chief was withdrawn by the administration and there was initial speculation that it was because of his comments regarding the violence, but it transpired that the move was taken a day before the statement was released.

Mr Wolf was out of the country meeting with counterparts in Cyprus, Bahrain, and Qatar, when the pro-Trump mob stormed the Capitol. He returned on 8 January.

In September, a federal judge in Marlyand ruled that Mr Wolf was appointed unlawfully to lead the department.

Judge Paula Xinis ruled that the previous acting Homeland Security Secretary Kevin McAleenan’s appointment was also invalid, so Mr Wolf – who came into his position through an amendment to the agency’s succession order made by Mr McAleenan – also came to the role unlawfully