California health authorities on Saturday reported a record high of 695 coronavirus deaths as the Los Angeles coroner’s office said it was being forced to use temporary storage units for corpses.

The state is coping with its worst surge of the pandemic and some of the highest levels of Covid-19 in the country.

Hospitals in Los Angeles and across the southern half of the state are overwhelmed with patients, oxygen used for treatment is running low and ambulances sometimes wait hours to unload patients.

The state Department of Public Health said the 695 deaths reported on Saturday raises the state’s death toll since the start of the pandemic to 29,233.

A spokeswoman for the coroner’s office told the LA Times that a team from the National Guard was being brought in to help with the transfer of bodies from hospital morgues to 12 refrigerated storage units parked outside.

Dr Vohra said: “This is a mass casualty, a mass fatality event that our county is experiencing. And we’ve had to expand the storage areas for the dead bodies here in Fresno County beyond what’s normal.” 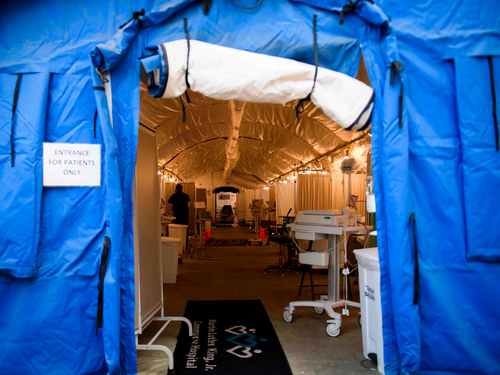 A surge of cases following Halloween and Thanksgiving produced record hospitalizations in California, and now the most seriously ill of those patients are dying in unprecedented numbers.

Conditions will only worsen in coming weeks as about 12 per cent of new positive cases inevitably deteriorate into needing hospital care, and 12 per cent of those hospitalized need increasingly scarce intensive care.

Already, many hospitals in Los Angeles and other hard-hit areas are struggling to keep up and warned they may need to ration care as intensive care beds dwindle. Hospitalizations are nearly 22,000.

The rate of new cases in LA County, the state’s most populous county, is nearly double that of December.

“This is a health crisis of epic proportions,” said Barbara Ferrer, the county public health director.

LA County’s Methodist Hospital of Southern California has convened an in-house triage team that makes daily evaluations “about the severity of critically ill patients that allows us to distribute resources to those who need it the most,” said chief strategy officer Cliff Daniels.

The hospital is not rationing care, Daniels said, and “we hope we don’t get there. But … we haven’t yet seen the surge from Christmas and New Year’s. Times are going to get tougher”.

To the south, San Diego County Supervisor Nathan Fletcher said authorities anticipate an increase in cases based on travel data over the Christmas and New Year’s holidays and the spread of a highly contagious virus variant.

To the north, officials in Santa Clara County pleaded for residents to heed health guidelines to prevent hospitals from having to ration care during the worst surge in the county of 2 million people since the pandemic began.

About 1,000 people in the county are testing positive for COVID-19 each day and 100 of them are being admitted to hospitals daily, said Dr. Ahmad Kamal, the county’s director of Healthcare System Preparedness.

“And as awful as it is, it could get worse,” Dr Kamal said. “We haven’t had a situation where two people are out of breath and one person gets a ventilator. We could get there.”

Coyle, of the state hospital association, and Ferrer in Los Angeles both said a big problem is that hospitals are accepting more patients than they can discharge.

State officials should thus override decisions by many county health officers that prevent recovering coronavirus patients from being released to skilled nursing facilities, despite fears that they could spread the virus, Coyle said.

She said the state should accept children’s hospitals’ offer to take patients up to 27 years old.

It should issue blanket waivers allowing hospitals to use a team approach to providing ICU services when there aren’t enough regular intensive care nurses. That would build on a temporary suspension of nurse-to-patient ratios that the California Nurses Association warns is endangering patient care.

And it should suspend the usual requirements for nurses to apply for annual updates of their certifications or spend an average of two- to three-hours each day filling out reports on their patients, Coyle argued.

“There is a bucket of these things that make sense in a normal environment that need to be all put aside for the next handful of weeks until we get through this crisis,” Coyle said. “Focus on nothing other than saving lives for the next few weeks.”