California has surpassed New York as the state with the most coronavirus deaths — despite the United States’s overall death toll starting to decline on last month.

The sombre milestone came on Tuesday, when California’s death toll topped 45,000 since the pandemic began. New York, meanwhile, has recorded around 44,700 deaths, according to a Reuters tally.

California’s health secretary, Dr Mark Ghaly, commented that the death toll was “a heart-wrenching reminder that Covid-19 is a deadly virus” and that “we mourn alongside every Californian who has suffered the tragic loss of a loved one during this pandemic.”

While the country’s most populous state experienced a relatively stable spring and summer, California was not spared from a recent Covid-19 surge alongside the rest of the United States, with new cases peeking at around 40,000 a day, and deaths at 764 a day, in mid-January. 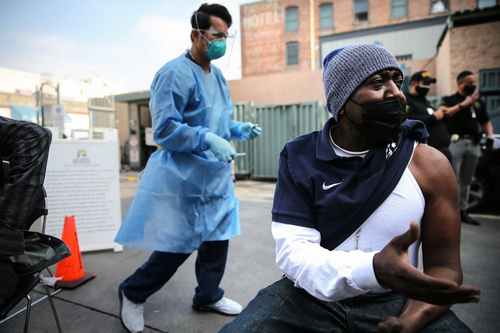 And while new coronavirus cases and hospitalisations have been dropping steadily across both California and the US over the past two weeks, deaths — a lagging indicator — have plateaued at still alarming levels.

As analysis by the Covid Tracking Project shows, the United States — despite seeing Covid deaths decline by 15 per cent since mid-January — continues to record more deaths than at any point last spring.

Responding to those numbers on Tuesday, California Governor Gavin Newsom described the state’s daily deaths as remaining “remarkably” high, with deaths averaging at around 500 a day over the past two weeks.

“Deaths continue to be devastating,” the governor added, although per capita, California remains a distance behind New York and other states for Covid-19 deaths, with 113 deaths per 100,000 people.

As a whole, the United States has reported 27.25 million infections and 471,746 deaths as of Thursday, while some 76,000 patients were hospitalised with Covid-19 on Wednesday, the lowest daily number since mid-November, according to the Covid Tracking Project. Death toll rises to at least 10