The Czech government said Monday it will no longer consider using Russia’s coronavirus vaccine before EU approval amid the diplomatic fallout from its accusations of Russian secret services’ involvement in a fatal arms depot explosion.

Prague announced the expulsion over the weekend of 18 Russian diplomats whom it identified as secret agents of Russia’s intelligence services. The Central European nation with a pro-Russian president accused the intelligence services of involvement in the 2014 explosions at the Vrbetice ammunitions depot southeast of Prague that killed two private company employees.

“The only way now is to rely on vaccines that have been approved by the European Medicines Agency,” Hamáček said, according to AFP. 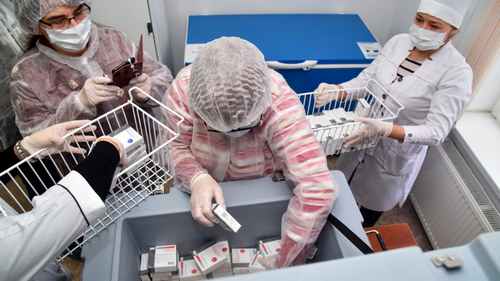 The EMA is conducting a rolling review of Sputnik V to determine the shot’s safety and efficacy, a process that has itself become embroiled in geopolitical recriminations. EU member states Hungary and Slovakia have bypassed EMA’s approval process to grant Sputnik V, which Russian President Vladimir Putin touts as “best in the world,” emergency approvals.

Russia retaliated to the 18 diplomatic expulsions by ordering out 20 Czech diplomats. Russia also banned both the Czech and U.S. embassies in Moscow to employ Russian citizens, which it called a recruiting tactic.

Czech police said separately that they were seeking two Russians in connection with the fatal explosions who had carried passports used by suspects in the poisoning of former Russian spy Sergei Skripal in Britain.

Moscow called the claims “absurd” and accused Prague of bowing to pressure from the United States.