In closing remarks spanning attacks on Joe Biden and outrage over right-wing grievances with The Muppets and Mr Potato Head, Donald Trump Jr said his father’s “Make America Great Again” agenda remains the “the future” of the Republican Party following his loss in the 2020 presidential election.

His speech (titled “Reigniting the Spirit of the American Dream”) closed the first day of the 2021 Conservative Political Action Conference, the nation’s largest right-wing summit, where the former president remains the party’s most popular figure – with a literal golden statue in its hallways.

Moments before Trump Jr’s speech, Trump adviser Kimberly Guilfoyle said that the former president “from his desk at Mar-a-Lago will accomplish more for America in the next four years than Joe Biden and Kamala Harris could ever dream of.”

The first CPAC in the post-Trump era will test the party’s messaging and appeal ahead of 2022 mid-term elections and 2024 presidential race, while its speakers – spanning pro-Trump lawmakers and right-wing media figures – continue to promote baseless “election integrity” claims that fuelled the 6 January insurrection.

But dominating the stages on Friday were fear-filled visions of an America corrupted by an authoritarian left – colluding with Big Tech, Hollywood, the media and the Chinese Communist Party – to eliminate protected speech. 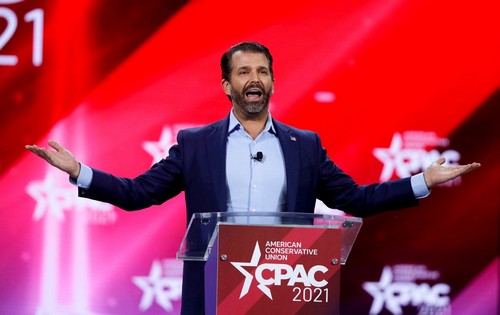 The heart of their grievances: their social media accounts and posts have been removed or flagged for violating terms of service, including hate speech, racism and false information. This year’s theme is “America Uncanceled.”

At CPAC, “The Muppets are cancelled” and Mr Potato Head is “gender neutral”, according to Donald Trump Jr, and “the core of the cancel culture” aims to revoke the First Amendment, Senator Marsha Blackburn said.

“These are the issues of our times, folks,” Mr Trump said.

And to many among the pro-Trump caucus, it is up to the former president alone to stop them, after he was robbed of a second term.

In his remarks, Mr Trump Jr revived campaign trail attacks on his father’s opponent and Republicans who defied him.

Following the Biden administration’s airstrikes in Syria on Thursday, Mr Trump Jr – whose father launched dozens of similar strikes in the Middle East – said: “Who would have thought that within 33 days, we’d be bombing the Middle East again?”

“Speaking of bombing the Middle East, have you seen Liz Cheney’s poll numbers?” he said of the third-ranking House Republican, who he also called “Lincoln Project Liz”, after she broken from the party to vote to impeach the former president for inciting the 6 January insurrection.

“I’m sure she has a lot of bipartisan support because if there’s one thing that she and Joe Biden definitely want to do, it’s bomb the Middle East,” he said.

It’s difficult to imagine this year’s conference – held in-person, indoors – looking any different than its 2020 event, or without the deaths of more than 500,000 Americans from the coronavirus pandemic between them, as GOP figures then and now have dismissed the still-raging public health crisis.

At last year’s event, Mick Mulvaney said the coronavirus was an “attempt to bring down the president”.

On Friday morning, CPAC officials urged attendees to wear face coverings inside the hotel conference room, as per the rules. They were booed.

Texas Senator Ted Cruz, whose state has seen more than 41,000 Covid-19 deaths, joked about the mask guidance, asking the crowd “how much virtue do you want to signal” after saying health officials are telling Americans to wear masks “for the next 300 years.”

Senator Tom Cotton lamented holding the conference in Florida as opposed to Washington DC, saying that “we are still banned from getting anywhere near our nation’s Capitol” despite declining cases and vaccine availability, though public health officials have not suggested dropping guidelines as daily deaths, hospitalisations and case rates remain dangerously high, far above other parts of the world.

“Maybe if CPAC had promised to burn down buildings and tear down statues, they’d have let us up there,” he said.